Airing is a soon-to-be-released micro-CPAP device that promises to work as well as any other CPAP machine, but without masks, hoses, cords, or discomfort.

Airing’s inventor tells us on their website that the single-use device’s soft, silicone nose buds are designed to fit comfortably inside your nostrils while providing a tight seal.

The rest of the plastic device sits outside your nose, which houses hundreds of proprietary micro-blowers—originally designed to regulate heat in computer chips—that work with your breathing. This area also houses Airing’s Zinc-air battery that provides eight hours of power and ensures you get a good night’s rest.

You’re here because traditional CPAP machines suck. Sure, they can help prevent the potentially serious health effects of sleep apnea, but they’re loud, expensive, and most of all, horribly uncomfortable.

But with Airing, have we entered a new era, where you can have your CPAP and wake up well-rested, too? Will it “liberate you from sleep apnea,” as claimed on the product’s website?

Here, we’ll cover all the important points so you can be better informed before handing over your money—starting with the condition Airing was designed to treat.

What Is Obstructive Sleep Apnea?

When we sleep, muscles all over our body relax. Sometimes, the tissues at the back of the throat can become too relaxed, causing them to block the airway to varying degrees.

When this air passes through and causes throat tissue to ‘flap,’ this is known as snoring. However, when this airway blockage becomes so severe that it results in shallow breathing or complete pauses—some of which can last minutes—this is a condition known as obstructive sleep apnea (OSA).

Both snoring and OSA can cause sufferers to experience grogginess the next day, but ongoing sleep apnea can lead to health risks like high blood pressure, heart failure, diabetes, depression, headaches, and stroke. This is why it’s so important to speak with your physician if you think you might be experiencing OSA.

The good news is that OSA can be treated, but it’s not always pretty.

How Does Airing Compare to a Traditional CPAP Machine?

While there are a variety of designs and features, all continuous positive air pressure (CPAP) machines feature three fundamental parts:

Once this air enters the user’s throat, it works to increase pressure to a point where the tissues in their airway can’t collapse or prevent them from breathing properly.

Comparatively, at just two inches long, 1.5 inches wide, one inch high, and weighing less than an ounce, Airing claims to deliver this same positive air pressure, but in a much more compact package.

On the outside, Airing’s pliable silicone rubber nosebuds will come in different sizes and will be easy to insert, form a comfortable seal, and help the device remain in place while you sleep, without the need for straps.

The plastic housing features inhalation and exhalation vents, which are covered by micro screens. Before entering, all incoming air will be filtered.

Powering Airing is a Zinc-air battery, similar to a hearing aid battery, which we’re told in the promotional video contains the most stored energy for the volume and weight. In fact, the company claims their batteries provide about 10X more stored energy in the same space as a Lithium-ion battery (which would be too heavy).

It’s also easier to manufacture, lower-cost, and more environmentally friendly than rechargeable options. Despite its size, the Zinc-air battery can power Airing for eight hours. 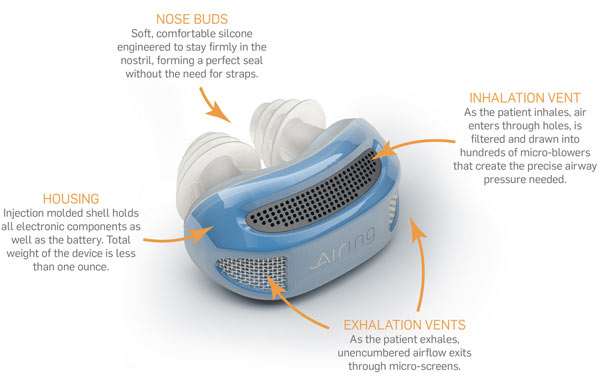 Using form-fitting silicon nosebuds, a small plastic housing, and hundreds of micro-blowers, Airing promises to deliver CPAP, but without all the bulky equipment like air pumps, hoses, and masks. Image credit: Airing, Inc.

Now, this is on the outside. But what is Airing hiding on the inside that really differentiates it from other CPAP devices?

Invented by Stephen Marsh, the micro-blowers in Airing work as displacement pumps, similar to a bellows that blows air into a fire.

Instead of using handles and a large chamber, though, these micro-blowers use an electrostatic charge to move small plates up and down. When they’re pulled (repelled) apart, they suck a tiny amount of air in; when they come back together, they push air out.

Now, due to their size, a single micro-blower won’t deliver much air movement. This is why hundreds of these blowers work in parallel inside each Airing device, pumping air thousands of times per second, to provide the adequate amount of air to the user. 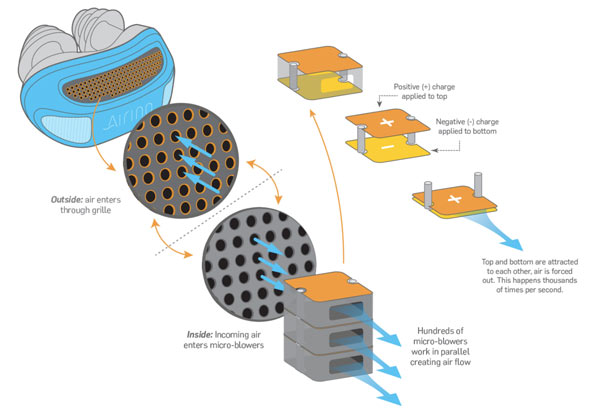 While Airing was still pending FDA approval at the time of our research, the company noted they were hoping it would be classified as “similarly equivalent” to existing CPAP machines—just a miniaturized version. This would cut the approval time down from years to months.

Once approved and release, the company tells us that Airing will initially be available in a range of pressures (up to 20) to match your needs, similar to contact lenses. However, they company would eventually like to create an adaptive version that will self-adjust.

On the other hand, Airing will be able to automatically adjust micro-blower output at release, so users won’t have to worry about wasting “unnecessary energy blowing against the exhalation.”

How Much Will Airing Cost?

On average, the company expects to price Airing somewhere around $3 per device. If your insurance company reimburses the typical 80%, they tell us this could reduce your per-device cost to $0.60.

Speaking of which, according to Airing’s FAQ:

“The integrated pressure sensors and electronics that control the Airing device can track the patient's breathing cycle and deliver the proper treatment. The appropriate data can be stored for subsequent retrieval. This built-in feature can be used for proof of compliance. That will help with reimbursements.”

With all of this in mind, here were the different pledge options listed on Airing’s Indiegogo campaign:

On their main Indiegogo page, Airing’s estimated shipping date was originally June 2017, although per one of their recent updates, this has been moved back to “sometime during 2018.” This is fairly common with crowdfunding campaigns, and not necessarily a cause for concern.

Given the fact that Airing hadn’t be released yet, was there any online customer feedback?

It seems Airing has tapped into the needs of a lot of CPAP users, as their June 2015 Indiegogo was well-received, with over 19,000 backers who helped raise more than $1.8 million.

Since that time, the company seemed to post fairly regular updates (about once per month) letting backers know what they’re up to. Most recently (4/4/17), the company reported that they were able to gain access to the laser micromachining technology needed to create the small parts for their micro-blowers.

The company also quickly responded to most comments posted on Indiegogo.

Even considering their as-yet-unreleased product, Airing’s Facebook page had 650+ reviews and an average rating of slightly more than four stars. Most seemed eager to get the CPAP they need, without masks or the associated discomfort.

Important note: Since the campaign’s success, it seems there have been multiple Airway “knock-offs” (to use the company’s own words) from overseas manufacturers entering the market, but are hollow inside (no battery, blowers, filters, etc.). You can read more about this trend on the company’s blog.

On the Facebook page referenced earlier, one user posted a link to a lawsuit (Encite, LLC v. Soni, C.A.) involving Mr. Marsh and one of his previous companies, Integrated Fuel Cell Technologies, Inc. It appears the organization never delivered a viable product using the micro fuel cell battery technology they claimed “could replace batteries in devices such as cell phones and laptops.”

Obviously, we’re only reporting the facts, and not indicating that you’ll experience any of the same with Airing.

Considering this new technology, is there anything remotely similar to Airing on the market?

Our Final Thoughts About Airing

Living with your sleep apnea seems like a constant push-and-pull struggle. On the one hand, you want to maximize your health by wearing a CPAP machine. On the other, they’re uncomfortable and in some cases don’t help you get a better night’s sleep.

But by eliminating the sometimes noisy air pump, the inconvenient tube, and the uncomfortable mask—not to mention the high prices—Airing might seem like it might offer a ray of hope. And based on what we learned during our research, it appears they’re on the verge of really impacting people’s lives.

Will there be additional future delays? It’s not easy creating new technology, much less manufacturing it and implementing it into a device, so hiccups are almost unavoidable. But it seems like the company is so far open about what they’re experiencing, even if they’re currently delayed about a year.

Just remember that Airing’s devices can’t be recharged and aren’t recyclable, so you’ll have to toss each one out after only a single night’s use. The company tells us they’re focused on other options in the future, but for the time being, they might not exactly be considered environmentally friendly.

But if Airing really can address your sleep apnea, while feeling more comfortable and helping you achieve a better night’s sleep, this could only be a minor concern.

Write a Review for Airing!

Airing Review: What You Should Know