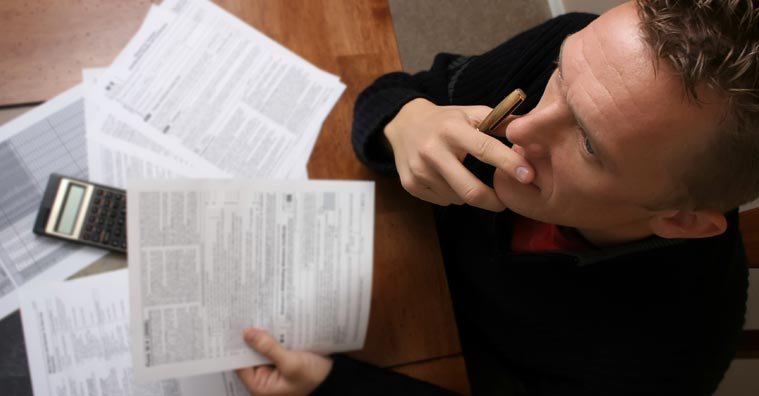 Tax-filing mistakes are scary for one simple reason: the IRS.

Many of us have a fear that entering the wrong numbers or forgetting to check a box or answer “No” to a question you should’ve said “Yes” to will end up delaying your return and eventually gracing your mailbox with a stern letter from the IRS telling you something went wrong.

I think it’s safe to say that nobody wants a letter from the IRS and all of us want our return to come as quickly as possible.

While there’s no foolproof way of avoiding mistakes on your tax return, tax experts we reached out to gave us 11 common mistakes and tips that will help you know how to avoid them.

1. You Rush Through Your Tax Return

Let’s face it; we procrastinate with our taxes. And when we wait until the last second, we rush the paperwork and that can cause mistakes, says Gail Rosen, a New Jersey-based CPA with more than 35 years of experience in the accounting field.

“Don’t do your taxes at the last minute: Then you rush through your return and miss things. When you miss items or do things incorrectly, this can cause an audit,” Gail told us. “Start your taxes early, put it down, look at it again and get a professional, if you need help.”

» SEE ALSO: Tax Software vs. Accountant: Which Tax-Filing Method Is Best for Your Situation?

There have been times where I’ve filed taxes thinking that the IRS doesn’t care about the side gig I did during the year that brought in a few hundred dollars.

Did the IRS know about that money? Maybe not. However, even though the income – whether it’s $500 or $5,000 – can’t necessarily be traced, it does appear in your bank account.

And that evidence, says Kyle Walters, a CPA with L&H CPAs and Advisors in Dallas, Tx., is enough to raise suspicion.

“The IRS does care about that $5,000 … because it’s unreported income,” Kyle said. “Whether the IRS would be aware of that or not, who knows?”

Kyle went on to say that the IRS has access to your banking information, so even though you don’t report the income from your side gig, your bank account clearly shows that money showed up from somewhere.

“If there’s an audit or an examination of your return, they’ll typically ask for other documentation to validate the reported income such as bank statements or information on assets,” Kyle said.

“So, if there’s an assumption there was unreported income, that may be uncovered during the course of an audit.”

But as they quickly learn, taxes are a year-round exercise in planning, budgeting and keeping track of expenses.

“Everybody should have a good budget, but for freelancers, especially when you’re starting out, you really need to keep a tight rein on your finances and factor your taxes in,” Eric told us.

In our guide to freelancer taxes, we help you understand why and how you should create a year-round tax plan.

For the purposes of this article, we’ll just say that your taxes are going to be more complex than you expect, and you should be prepared to learn on the fly and make a few mistakes.

If your taxes become too much to handle, don’t’ make the error of not filing. Turn to a CPA for help, Eric says.

“If you’re in trouble, a good CPA is worth their weight in gold,” he told us. “The best time to have them is during the year when they can help you plan and make moves.”

Expat life can be pretty amazing. While you might spend hours researching cities and cost-of-living, most of us will fail to apply that same diligence to understand foreign taxes and your U.S. tax liability while you’re abroad.

You see, the IRS grants something called a Foreign Earned Income Exclusion (FEIE), which is like one giant deduction for U.S. citizens who work abroad.

However, you can only get this deduction if you live outside the U.S. for at least 330 days in a one-year period (physical presence test) or you have a visa/residency in a foreign country and are paying into their social security system (bona fide resident test).

If you’re living and working abroad, keep track of how many days you’ve been outside of the United States. Should you be off in calculations by just a few days, your tax situation may change drastically.

For example, is it worth it to return to the U.S. for 10 weeks if it’s going to alter your eligibility for the FEIE?

Hugo Lesser, communications director at Bright!Tax, said he’s heard of expats believing they simply don’t need to file because they’re overseas, or they misinterpret the FEIE.

“The most common mistake expats make is not knowing that they are still required to file US taxes despite living abroad,” Hugo said.

“Others have heard of exemptions such as the Foreign Earned Income Exclusion, and believe that this means they don’t have to file, whereas, in fact, they have to file to claim any exemptions that may be beneficial to their circumstances.”

Remember how we said that the IRS cares about your income, no matter how small or big it is? The same goes for deductions.

In the case of freelancers, this is even truer. A 1099 worker has more reason to make bigger deductions because they’re paying 100% of the FICA, whereas the W-2 worker is only paying half.

While you may think that the IRS doesn’t care that you made some questionable deductions, Vincenzo Villamena says you better think twice about that mentality.

“Sometimes freelancers deduct too aggressively, and they get audited,” he said.

The opposite is also true for all taxpayers – sometimes we aren’t aggressive enough in taking advantage of deductions. Our article on overlooked tax deductions can help you avoid this.

As we mentioned in that deduction article, the best way to set yourself up for deduction success is to keep track of charitable spending, moving expenses and any expenses you rack up for a job search or job relocation.

6. You Don’t Double Check Your Return Before Filing

I’ll be the first to admit that I don’t always check my tax return twice before filing.

Skipping a quick review could lead to something as small as a missed decimal point or as big as an incorrect social security number.

Lester Law, managing director at Abbot Downing, a boutique firm under the Wells Fargo umbrella, says you should always review the following information:

“This is the kind of stuff that most gloss over, but the IRS does not,” Lester said. “If you’ve prepared your return, make sure that you double check, or perhaps triple check, the numbers.”

If you’ve got a tax professional helping you, speak up and let them know you want to verify everything before they file your return.

“Ask them if you don’t understand the amounts reflected your return,” Lester told us. “Remember, you are the one signing the return. So, have the professional explain everything to you.”

Parents who help their kids pay for college is a pretty amazing thing. It’s a culmination of hard work on the parents’ part to set aside money for their child’s education, and it’s an effort the IRS doesn’t take lightly.

As a result, they offer something called the American Opportunity Tax Credit (AOTC), which is a $2,500 tax credit you can claim if you’ve helped pay for your kid’s college tuition.

“One mistake that I often see on tax returns is that parents miss claiming the educational tax credits for paying college tuition,” Joe said. “Missing the AOTC is leaving $2,500 on the table.”

According to the IRS’ information page about the AOTC, “course-related books, supplies, and equipment,” along with tuition, can be deducted. There are some specifics about this program, so click on the link to find out more.

» SEE ALSO: 10 Most Overlooked Tax Deductions You Should Use on Your Tax Return

Basically, the IRS grants you a deduction for a home office based on how big your office is in relation to the size of your house.

Evan Harris, an investor relations rep for SD Equity Partners in San Diego, says people often make the mistake of thinking they can use the home office deduction for a room they occasionally work in.

“Be sure your office qualifies as a home office before you deduct anything,” Evan said. “A home office should be a primary place of business and not something you use to avoid going into your company’s office.”

9. Not Transferring Your Retirement Account to Your New Job

Amid the excitement of changing jobs, employees often forget that there are significant tax implications if they don’t transfer their retirement account from their old employer to their new one.

So, whenever you leave a job, Dean said, you have 60 days after you close your account to deposit the funds in another 401(k) or IRA, whether it’s through your new employer or not.

“If you miss the 60-day window the IRS will classify the money as an early withdrawal if you’re younger than 59 1/2, will add it to your earned income and tack on a 10% early withdrawal penalty,” Dean said.

10. You Forget to Report Stock Sales

Gail Rosen said this is a big one with her clients. When you make a stock sale, you’re supposed to report it to the IRS on your tax return, even if you reinvested the money or put it into a retirement account.

So, how do you avoid getting a nice little letter from the IRS reminding you that you forgot to report a stock transaction? By reporting every sale.

“Make sure you report all sales of stock on your tax return when you file.  If you realize you missed a sale, go back and amend your return because you will be caught,” she said.

This scenario comes up a lot when kids go off to college and get a job. Tax season rolls around and they want to cash in on their tax return, so they claim themselves as a dependent, which means they’re more likely to get a bigger return.

At the same time, though, the student’s parents are claiming her as a dependent, and that just doesn’t work for the IRS, Gail Rosen said. It’s either one or the other.

“When you go to file your tax return, your return will not be allowed to be processed since your kid can’t be claimed by them and then by you,” Gail told us. “You have to get your child to amend their tax return and it gets to be a mess.”

Clear up any confusion by having a quick conversation with your child before tax season. The IRS says you can claim a dependent if you provide more than 50% of their support, Gail says, in addition to a couple of other requirements.

The emergence of electronic filing has reduced the number of errors we make when we turn in our tax returns.

However, tax software isn’t perfect. One wrong number or letter can get you tangled up in a mess of IRS letters, tax amendments and more.

Thankfully, there are experts out there willing to help you file your taxes accurately. If you feel like tax season is too overwhelming, hire a tax professional to file on your behalf.

If you still want to do them on your own, then keep in mind some of the things I mentioned in this article:

If you can make these four principles a part of your tax season philosophy, then you should see a dramatic decrease in the number of mistakes you make when you file.

Filing soon? Head over to our article on the four most popular tax sites to figure out which tax software will be the best fit for your tax situation.