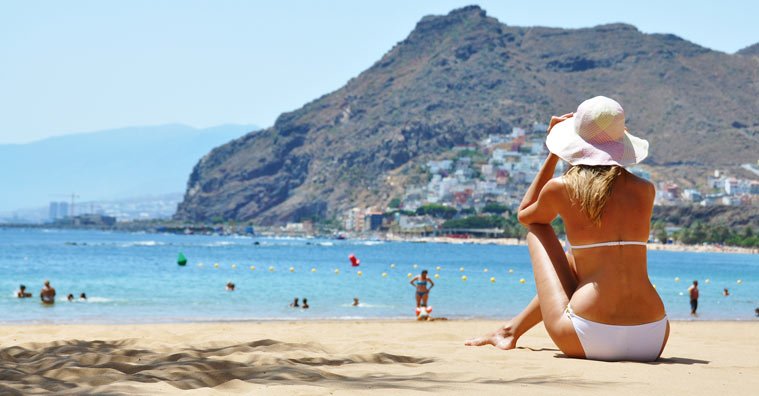 As the weather warms, you’re understandably excited to head outside—perhaps before applying enough sunscreen to protect your pale, winterized skin. “It’ll help me get a base tan,” you rationalize.

But is this common justification based on reality, or is it fantasy? With the help of professionals, we’ll help you answer important questions like these while discussing six common tanning myths you need to know.

1. There’s No Such Thing As a Healthy Bit of Bronze

Living next to the Caribbean, typing every word of this pains me. See, I thought I’d found a happy medium by applying an SPF 15 and staying out of the sun during “peak hours” of ten to four. That combination has allowed me to avoid turning into the redder half of a surf n’ turf platter while still enjoying some time in the sun.

According to Jennifer MacGregor, M.D., clinical professor of dermatology at Columbia University, “Any change in skin color, whether it’s a tan or burn, is a sign of skin damage.”

“Any change in skin color, whether it’s a tan or burn, is a sign of skin damage.”

Why? Because UV ray penetration causes the body to create additional pigment, in an effort to protect the skin from further damage. Sunscreen can minimize this effect, but it’s still an indication you've been exposed to too much sun.

That “healthy bit of bronze” I was boasting isn’t just pigment production. It’s a clear sign of UV radiation that causes DNA mutations—which can lead to all three types of skin cancer, including the most fatal and increasingly common one among young sun worshipers: melanoma.

2. Your Legs Still Need Sun Protection, Even If They Remain Stubbornly Pale

The skin on your legs is thicker, produces less moisture, and tends not to make as much melanin as the rest of your body. This can lead some seeking to spruce up their pale pins to the decision that it’s perfectly okay to apply SPF only from the waist up.

Unfortunately, skin cancer loves anywhere the sun touches—including on your legs, back, feet, and chest.

So while it’s good to protect your face, chest, neck, and arms, skipping the rest of your body leaves you vulnerable. Not just to skin cancer, but signs of aging as well: You’ve heard the bit about telling how old someone is simply by looking at the back of her hands? It’s a dead giveaway for years of unprotected sun exposure.

3. Base Tans Only Provide SPF 3 Protection—Which Is Less Than a White T-Shirt

Thinking of soaking up a little sun to ease skin into warmer months? A few brave scientists studied the bare buttocks of 16 young adults and found that a base tan offers almost no protection against future ultraviolet exposure.

Why their buttocks? From the Scientific American:

“Because butt cheeks do not typically get much time in the sun, a team of British scientists asked 16 young healthy adults to bare their previously unexposed posteriors to simulated sunlight for one 1998 study.

“The volunteers, who had varying shades of pale skin, agreed to subject their rumps to two weeks of daily tanning sessions that dosed them with ultraviolet A (UVA) and ultraviolet B (UVB) rays on par with London’s summer noonday sun.

“Yet even among people who tanned easily, the tanning sessions only gave them “very modest” protection, equivalent to a sunscreen with SPF 2. Other studies, including work looking at darker, olive-colored skin, came to similar conclusions: A tan affords a sun protection factor of 3 or less.”

Dermatologists are adamant at dispelling the myth of a base tan for a few reasons: There’s the fear that that sunbathers who have a bit of color will compound the injuries to their skin with riskier behavior, such as going longer in between sunscreen applications or not wearing it at all.

There’s also the worry that the pervading base tan myth will lead people into a tanning bed, which it turns out are pretty much the worst thing for your skin short of just setting it on fire. (Slight exaggeration, but seriously...)

» For Further Reading: How to Avoid Sunburn on Your Vacation

4. There Is Literally No Upside to Indoor Tanning

The American Academy of Dermatology reports that while rates of indoor tanning have risen by 27 percent since the 1980s, melanoma cases in young women shot up 50 percent in the same time period.

Despite multiple studies proving that indoor tanning is driving an increase in skin cancer statistics, there’s still a lot of misleading information online about the safety and benefits of indoor tanning beds.

Here’s what you need to know about indoor tanning:

More so, getting a base tan from a tanning bed appears to be an even worse idea than preemptively exposing yourself to the sun.

Returning to the Scientific American article cited earlier, “UVA is often chosen for tanning beds because its longer wavelength penetrates deeper into the skin and is less likely to cause sunburn.”

However, Heather Rogers, professor of dermatology at the University of Washington School of Medicine, explains: “UVB rays are better at triggering several more long-term protective mechanisms in response to cellular damage. Those include the production of more melanin, skin thickening, and signaling DNA repair systems that try to correct for mutations before they are carried forward.”

In contrast, UVA-only lamps trick your body into redistributing its existing melanin in response to UVA exposure—which results in the immediate skin darkening that indoor tanning fans love so much. It also means that tanning from UVA-only light provides protection that doesn’t even meet an SPF 1.5 threshold. So much for that idea of getting an indoor base tan before your next vacation.

5. Having Darker Skin Doesn’t Mean You Can Forgo Sun Protection

Having more pigment in your skin is correlated with a slightly lower risk of skin cancer, but you’re not immune. In fact, a 2010 Centers for Disease Control and Prevention survey found that up to 30 percent of those with darker skin received a sunburn within the previous 12 months.

Here’s what you need to know to stay sun safe:

John Whyte, M.D., MPH explains that, “For the typical person with dark skin, the more melanin acts as an SPF around 10-15—primarily defending against ultraviolet B rays. However, that melanin provides less protection against ultraviolet A rays which are also harmful.”

But, those numbers aren’t exact because judging the protection offered by a certain skin color isn’t as simple as it looks. People’s ancestries are often much more heterogeneous (diverse) than you think. This means that even if you have a dark complexion, you could have genes that make you more susceptible to skin cancer.

What’s scarier is that because people of color often hold the misconception they don’t need to worry about sun protection, they typically get checked out less often.

However, according to the American Academy of Dermatology, all types of skin cancers are increasing among people of color in the U.S., including African-Americans and Hispanics. In people of color, basal cell carcinoma is the most common of the skin cancers and leads to more deaths because of late detection.

Additionally, we’ve learned that people with darker complexions are more prone to developing skin cancers in the least sun-exposed areas, such as the soles of their feet, palms, toenails and fingernails, and around the mouth.

These include cancerous moles, freckles, lesions, and sores, which present very differently in the darker-pigmented skin than in the lighter skin. They may be red, purple or black in color, change in size quickly, or bleed easily.

So, if you have a darker complexion, Dr. Whyte emphasizes that you should “start putting on sunscreen as well as wearing a hat. In addition, be sure to check for any skin changes (change in color, texture, size) or moles in areas of the body that have no pigment, such as the palms of the hands and soles of the feet.

He also adds: “Don't forget to look at toenails and fingernails for any unusual spots or stripes.”

6. You Can Get Your Vitamin D Elsewhere

It’s difficult to find a doctor that still has at least one foot in the pro-limited-exposure camp, although in an article for Cosmopolitan Magazine, Frank Lipman, M.D., stated that sun exposure is an effective means of spiking our natural levels of vitamin D:

“I have a problem calling the sun a problem. In the past 50 years, the medical community has demonized the sun in the same way it did fat and salt a decade ago—and today we know certain fats are good for you and salt is not necessarily bad.”

“We evolved in the sun; we were made to get some sun, not to live our lives indoors and slather on sunscreen every time we go outside. If the sun is shining where you are today, get out and enjoy it, talk about a free natural treatment! All you need is a little common sense when heading outdoors, do it gradually and always avoid sunburn.”

Hmm. Those words are tempting to someone like me, who still secretly hopes for any reason to validate getting just a little color. However, my faith in his expertise begins to waver when I notice that below each blog post in which Dr. Lipman states the benefits of moderate sun exposure, he recommends only doing so when taking regular doses of an antioxidant dietary supplement—which he happens to sell.

Consequently, I think I’ll stick to the safer option of getting my vitamin D from foods like milk, cereal, yogurt, salmon, mackerel, and tuna.

Bottom Line: It Turns Out There’s Just No Safe Way to Tan

Your epidermis completely renews itself every 45 days—what doesn’t refresh is the damage to DNA caused by UV exposure. To avoid any skin scares, mind these important steps:

Sadly, it seems like no matter how hard we might wish, there’s no way the sun can safely transform pasty skin into bronzed skin.

The good news? Those seeking a safe tan have an abundance of sunless tanners and bronzers to choose from, including daily moisturizers, brush-on powders, and sprays—each that promise to gradually add a tan to the skin that washes off over time. Just remember that sunless tanners don't contain sunscreen ingredients and won't protect you from UV radiation.

For Further Reading on This Topic: