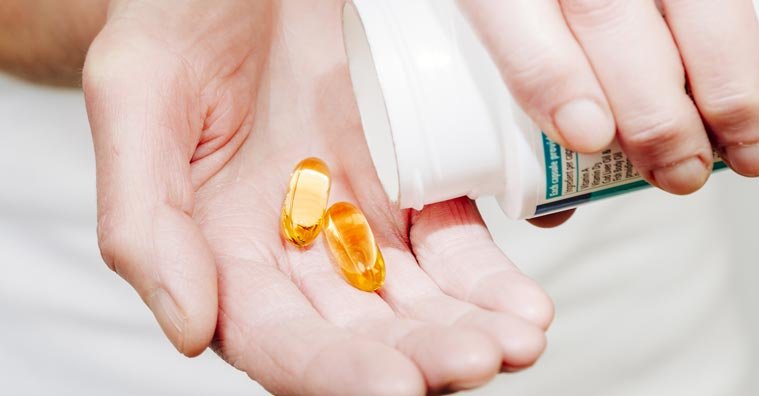 According to Jessica Crandall, Registered Dietitian Nutritionist and director of Denver Wellness and Nutrition, omega-3s should constitute about one percent of your total calorie intake.

In most instances, you can achieve this by eating “oily fish two times per week and snacking regularly on omega-3-rich plant sources, such as flaxseeds, chia seeds, and walnuts,” she says.

What if you’re not getting enough omega-3s from food, though, and your doctor recommends adding a supplement to your daily regimen? Where do you start? What should you look for?

In this omega-3 supplement buying guide, we’ll walk you through each step on how to choose the best option for your needs.

1. Fish Oil vs. Krill Oil, Flaxseed, and Algal Oil: How to Choose Your Omega-3 Supplement Source?

Because there are many different food-based omega-3 sources found in nature, there are also several different supplement options. According to professionals, is any one of these better than another? Here, we’ll discuss the most common.

Oily fish like Atlantic Herring and Salmon, Trout, and canned White Tuna contain some of the highest levels of omega-3s found in nature. As such, they’re an ideal source for formulating a dietary supplement.

Not only do they contain high omega-3 levels, but RDN Jessica Crandall also adds that the EPA and DHA found in these oily fish “do not need to be converted in the body,” thereby making them more biologically available and able to deliver their benefits.

On the flip side, she points out that other omega-3 sources like flaxseeds, walnuts, and soybeans contain high levels of ALA, which must first be converted into EPA and DHA inside the body, resulting in lower overall levels and fewer potential benefits.

Furthermore, as we also discuss in our Omega-3 Uses, Health Benefits, & Side Effects article, the omega-3 fatty acids found in unprocessed fish oil are present as triglycerides, which is the form that’s most readily absorbed by the body.

Finally, Healthline adds that unprocessed fish oil supplements are more resistant to oxidation, deliver additional vitamins A and D, and contain a variety of “other fatty acids that can help with absorption.”

ConsumerLab reports that fish oil and krill oil supplements both supply high levels of EPA and DHA, and there’s clinical evidence (although less so for krill oil) that both can have “a beneficial effect on cholesterol and triglyceride levels, as well as anti-inflammatory applications.”

Perhaps the biggest difference, they tell us, is that krill oil is generally a more expensive source of omega-3s; sometimes, as much as ten times the cost per dose than fish oil. And while the phospholipids contained in krill oil might enhance omega-3 absorption, they emphasize that it’s not enough to justify the meaningfully higher price.

Again, citing ConsumerLab, they explain that although both fish and flaxseed oils contain omega-3 fatty acids, flaxseed doesn’t contain EPA and DHA. Instead, as we discussed earlier, its ALA must first be converted by the body, potentially diluting its effectiveness.

While this might sound like an odd source of omega-3s, SuperFoodly explains that it’s likely the origin for the high levels found in oily fish. How so?

They explain that these “fish are obtaining it from the marine plants they eat. Or if those fish are higher up on the food chain, from the smaller fish they eat, which are consuming those plants. Likewise for krill and any other animal you can think of. So technically speaking, the original source for all omega-3 fatty acids is vegetarian/vegan, not fish.”

From a supplement perspective, Oligae.com reports “In terms of the concept, the idea is quite simple: Harvest the algae from its growth medium (using an appropriate separation process), and extract the oil out of it” using mechanical or chemical methods.

While we didn’t encounter any formal comparisons between the omega-3 levels found in fish oil versus those in algal oil, a 2012 systematic review of randomized controlled studies found it could help reduce LDL cholesterol and raise HDL cholesterol.

However, the review also found higher levels of “algal DHA concentrations of LDL-cholesterol, although the increase was accompanied by a change in the type of LDL cholesterol to the larger, less-atherogenic form. Further research is recommended because many of the studies reviewed were funded by industries.”

Price-wise, fish and algal oil supplements seem to fall within a few dollars of one another.

2. Pills vs. Liquids: Which Omega-3 Delivery Method Should You Choose?

Whether you choose standard fish oil or another popular omega-3 alternative source, your available delivery methods will largely come down to choosing between capsules and tablets, or liquids. Is one better than another?

We didn’t encounter any clinical evidence that one form delivers meaningfully better results than the other. However, omega-3 liquid supplements (especially those containing fish oil) can often have a fishy odor and aftertaste.

If they’re not enterically coated (ensures the medication isn’t released until reaching the small intestine), even capsules or tablets could result in much of the same.

To help overcome this, Jessica Crandall recommends storing them in the refrigerator or freezer. This is something that Arielle Levitan M.D., author of The Vitamin Solution: Two Doctors Clear the Confusion About Vitamins and Your Health, seconds.

3. Choose Your Dosage: How Much Omega-3 Should You Take?

Although Jessica recommends that the average person should consume 2,000 mg of fish oil every day, writing for US News Health, Tamara Duker Freuman, MS, RD, CDN, emphasizes that this can vary based on an individual’s health profile, as well as any other medications or dietary supplements they’re taking.

For example, she says that “since fish oil can have a blood thinning effect at higher doses, it may increase risk of bleeding in people who take other medications with similar effects, such as daily aspirin, vitamin E, or certain prescription medications – particularly Plavix (clopidogrel) or Coumadin (warfarin).”

Pro tip: Along these same lines, Arielle Levitan notes that although omega-3 supplementation could be “useful for those with high triglycerides and low HDL cholesterol,” this might not be the case “for those with low LDL,” regardless of the dosage.

Furthermore, as outlined by WebMD, dosages of between one and 15 grams of fish oil (0.6-10 g EPA and DHA at a variety of ratios) have been successfully used in clinical studies, depending on the condition being addressed.

With all of these details in mind, you’ll find that most fish oil dietary supplements deliver between 500 and 2,000 mg of omega-3 fatty acids per dose. As we frequently mention regarding any dietary supplement, you should enlist your doctor’s assistance to help you choose the right dosage and EPA/DHA ratio based on your specific needs and diagnoses.

4. Choose Your Price Range: Should You Pay More for an Omega-3 Supplement?

Even just a cursory search across online marketplaces like Google Shopping and Amazon will reveal that you can pay anywhere between $8 and $80 for an omega-3 fish oil supplement. Should you always go with the most expensive option, or will you get more bang-for-your-buck by paying less?

Ultimately, there’s no single answer to this question. However, there is some existing research that might help move us one step closer to making a more informed decision.

According to ConsumerLab’s 2016 Omega-3 Product Review (note: membership required for full access), among 29 omega-3 supplements tested, they found that five didn’t pass their requirements for freshness and purity and labeling accuracy.

Labdoor also performed 371 analytical chemistry assays on 54 of the best-selling omega-3 supplements, which were priced between $12 and $56. Regardless of price, their analysis found:

“32/54 products demonstrated omega-3 levels that varied by over 10% off their label claims, 18 of which recorded a 25% variance between actual versus claimed content. EPA+DHA content also showed significant ingredient variance, ranging from -25.3% to +32.7% versus its stated label claims.

“All but 4 products contained measurable amounts of mercury, with 3 products recording 50% or greater of the allowable mercury content/serving. The majority of products passed oxidation (freshness) assays, although 14/54 products recorded peroxide levels (measure of primary oxidation) at or above the upper limit.”

Bottom line: Based on existing comparisons, there doesn’t appear to be a strong correlation between the price of an omega-3 supplement, and its quality or the reported benefits it delivers to customers.

So, this brings up a logical question: As a consumer, how can you choose between one brand and another?

5. Choose Your Brand: Which Omega-3 Supplement Manufacturer Is Best?

Based on what we just discussed, it might not come as any surprise that, in the US News article cited earlier, Tamara Duker Freuman tells us “Among reputable manufacturers, the more expensive [omega-3] products are not always better.” In other words, there’s no single brand or price point that’s 100 percent certain to deliver on the supplement’s claims.

However, there are some specific suggestions you can implement into your buying decision.

For example, Tamara points out that in her practice, she recommends “products from manufacturers [that] have passed the test of purity and label accuracy, and that offer concentrated doses so that only one to two pills is required to meet needs.”

Along these same lines, Healthline recommends consumers buy products “that have either the GOED standard for purity or a ‘third party tested’ stamp on them,” which “shows they are probably safe and actually contain what they say they do.” Arielle Levitan, M.D. also emphasizes that consumers should focus only on supplements “bearing a U.S. Pharmacopeia (USP) or Good Manufacturing Practices (GMP) seal.”

From a sustainability perspective, Healthline notes that you’ll want to purchase a fish oil supplement “certified by the MSC, the Environmental Defense Fund, or a similar organization.” Also, since they’re prone to going rancid, “always check the date, smell the product, and see if it contains an antioxidant like vitamin E.”

Pulling ConsumerLab and Labdoor’s list of finalists together, along with top-rated results based on customer feedback across popular marketplaces like Amazon and Google Shopping, here are some brands and formulas that made frequent appearances (in no particular order):

Finally, as a consumer advocacy organization with years of experience researching dietary supplements, we’d also recommend looking for all the ‘standard’ factors with any manufacturers you’re considering, such as:

The Bottom Line About Buying an Omega-3 Supplement

While this article can certainly help you take a first step in the right direction, be sure to involve your doctor in the final decision-making process, who can recommend different options based on your specific diagnosis, needs, and personal preferences.