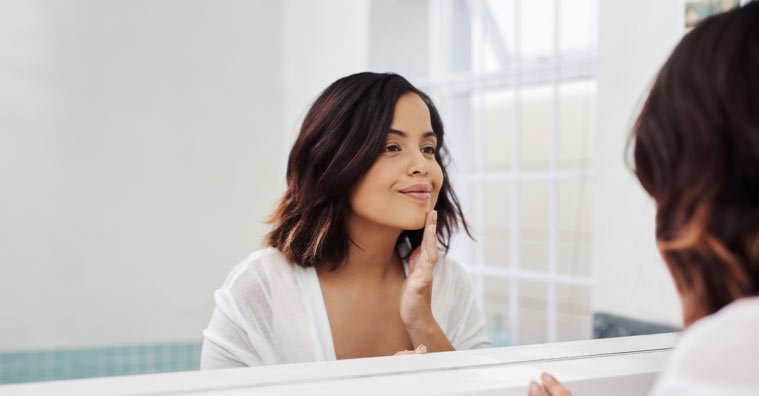 Coconut oil is praised by many for its claimed all-natural healing properties, which can potentially benefit people who ingest it, as well as those who put it on their skin and hair. But what about putting coconut oil on the face, which is covered with millions of pores that are susceptible to acne and other skin conditions?

This article takes a deeper look at putting coconut oil on the face. We’ve obtained input from several experts for this topic, including views for and against it, so you can decide if doing this is right for you.

Keep in mind that this article is not intended as medical advice; and that some people might be allergic to coconut oil, and should avoid using it altogether. Before you put coconut oil on your face, talk to a Board Certified Dermatologist, or your medical provider, first.

For the past few years, the popularity of coconut oil has risen because of claimed health benefits, such as preventing cardiovascular disease, improving memory, and strengthening the immune system, said Dr. Paul Yamauchi, Ph.D, a dermatologist in private practice at the Dermatology Institute and Skin Care Center in Santa Monica, California.

“This trend has carried over to applying coconut oil to the skin, which has gained endorsement from celebrities,” Dr. Yamauchi said.

Coconut oil has become “exceedingly popular” over the past few years due to many extolling its virtues as a skin savior, noted Dr. Matthew J. Elias, a Board Certified Dermatologist at Elias Dermatology, which has locations in Fort Lauderdale and Pembroke Pines in Florida.

According to Dr. Lauren L. Levy, a Board Certified Dermatologist at Loucas Dermatology in New York City, coconut oil, along with being gluten-free and dairy-free, has certainly become trendy over the past several years, because the product is considered “all-natural” and not made from chemicals.

“Additionally, it is very hydrating and provides a lot of moisture, which makes it very popular,” Dr. Levy said.

However, Kirstie Reese, a licensed esthetician and owner of Sugarface Skincare in Los Angeles, said she’s “not sure who started this coconut oil craze, but this is a dying trend – as it should be. Coconut oil has so many health benefits when used in our food, but it should never be put on your face.”

Benefits of Putting Coconut Oil on Your Face

Coconut oil, like any other oil, provides moisture to the skin, said Dr. Yamauchi, who is also the founder of the Clinical Science Institute in Southern California; and is a Clinical Assistant Professor of Dermatology at the David Geffen School of Medicine at UCLA.

“It also has been reported to have antimicrobial properties to prevent skin infections,” Dr. Yamauchi noted. “Compared to other oils, such as mineral oil, coconut oil was shown to be superior to mineral oil in preventing water loss in the skin – meaning, it’s better at preventing dryness.”

According to Dr. Elias, coconut oil is “very controversial,” with some thinking that the fat in the oil may clog the pores and make some skin conditions like acne worse; while others supporting the idea that it has anti-microbial and anti-inflammatory effects being beneficial for many skin conditions, including acne.

Dr. Levy noted that the main benefit of coconut oil is the moisturizing nature of the product. “It is oil-based, so is very hydrating,” she said. “People with dry skin, eczema, or those using drying medications, may use this to help provide moisture to the skin.”

While Reese maintains that coconut oil should never be used on your face, she said it is natural, antibacterial, anti-fungal and moisturizing, and “it can help improve the skin’s barrier function and calm inflammation.”

Is It Safe to Put Coconut Oil on Your Face?

According to Dr. Yamauchi, it’s safe to put coconut oil on your face as long as it does not cause you to break out with acne. He noted that for some people, coconut oil can be comedogenic, meaning it clogs the pores causing pimples. “Otherwise, if there are no adverse events and a person likes it, then it’s okay to use.”

Coconut oil contains many different fatty acids, Dr. Elias said, and the most prevalent fatty acid is lauric acid, which is known to have antimicrobial effects on the skin. While the safety of using it on your face is considered controversial by some, “I would say if you are using it and it’s not making you red or inflamed or too oily, then yes, it can be put on your face.”

Because coconut oil is oil-based, it’s very hydrating and provides moisture to the face, said Dr. Levy, adding that it also contains lauric acid, which has anti-bacterial and anti-yeast properties, and can potentially reduce bacteria and yeast on the skin.

“As long as you are not allergic to the product, it is safe to put on the face,” Dr. Levy said. In further advice, she said it may be a good idea to start with a test area to see how you react.

“Remember, not all coconut oil is made the same, and some products may have preservatives or additives that can make you break out or react,” Dr. Levy warned. “That being said, if you struggle with acne or have oily skin, coconut oil may cause breakouts and blackheads and whiteheads.”

Reese agreed that coconut oil has a unique combination of natural fats; and these fatty acids, such as linoleic acid and lauric acid, are hydrating and anti-microbial. However, “personally, I believe coconut oil is extremely pore-clogging, which can lead to acne breakouts.”

If you have oily skin, the fatty acids in coconut oil could potentially make your skin exceedingly oily, Dr. Elias noted. “If you use coconut oil and find it is causing you to breakout, then you should discontinue it.”

Coconut oil “definitely contributes” to clogged pores and blackheads, Reese said, and “the only way to avoid this is to not use it on your face.”

Dr. Levy agreed that coconut oil is very comedogenic, meaning it clogs the pores, which means breakouts. “It also is extra hydrating and can make the skin feel oily or greasy, especially if one already has oily skin.”

Dr. Levy added that perhaps using it and rinsing it off thoroughly will prevent breakouts. “I usually do not recommend occlusive products to my patients who have acne prone skin for this reason.”

People with dry skin, or acne-prone skin, can potentially make good candidates to put coconut oil on their face, Dr. Elias said; while those with oily skin types should avoid it.

According to Reese, ideal candidates are people who are dry and not prone to clogged pores/blackheads easily; and those who should avoid this include anyone who is acne prone or gets clogged pores easily.

Dr. Levy agreed that someone who has very dry skin, who is not allergic, and who is not acne-prone, makes a good candidate. Sometimes, “people who are using drying skincare regimens, such as products with acids, retinols or retinoids, may find coconut oil useful to prevent dry and flaking skin.”

Tips for Best Use

Coconut oil should be used at its effective dose that requires the least amount of treatments, Dr. Elias said, and for most patients, this would be 1 to 2 times per day.

While Reese advises against putting coconut oil on the face altogether, “if they really wanted to use it, I would limit the use to a couple times a week at night.”

Reese further recommended to take a small amount, rubbed together on your fingertips until it warms up and turns into an oil, and then apply to the skin. Reese also suggested using coconut oil at night, “because it can be very oily/greasy feeling.”

Dr. Levy noted that once or twice a day would be sufficient to use coconut oil, but said it’s important to remember coconut oil does not have SPF or UV protection. “So make sure you are still using sunscreen if applying in the morning. If your skin is too oily, I would recommend not using the product at all.”

It can be worn overnight, Dr. Levy added, “but remember, when left on the skin it will penetrate more and provide more potential to clog pores and cause acne lesions.”

Can Coconut Oil Be Used as a Moisturizer?

The fatty acids that make up 90% of coconut oil can be very moisturizing for the skin, Dr. Elias said; and those considering using it under makeup as a moisturizer “will be dependent on the person and their skin type.”

In other advice for those who want to use it under makeup, Reese said that “it’s mostly used to remove makeup.”

Coconut oil can be used under makeup, according to Dr. Levy, “but it does not have UV protection, so sunscreen is still necessary and it may be very occlusive this way resulting in increased breakouts.”

Dr. Levy noted that coconut oil may also be used on the body, adding that “I usually do not recommend for the face, but may recommend for the body for those with dry skin. Some of my patients swear by coconut oil for preventing stretch marks from pregnancy, which is attributed to the hydrating nature of the product.”

Reese said it’s important to remember that coconut oil is pore-clogging, “and you probably shouldn’t put this on your face…stick to having coconut oil orally to hydrate your body from within.”

Dr. Levy recommended avoiding using coconut oil on your face if you have oily skin or acne-prone skin, further emphasizing: “I cannot stress this enough.”

“I personally do not recommend coconut oil for the face because of the comedogenic nature of the product,” Dr. Levy added. “I do occasionally recommend it for body moisturizing or stretch marks for those with dry skin. I prefer to use non-comedogenic moisturizers for the face, like Cetaphil, ceraVe facial cream.”

Reese added that in her experience, clients come to see her for acne on a daily basis, and coconut oil “is one of the most pore clogging things out on the market by the natural beauty enthusiasts.”

“Just because it works for someone, it doesn’t mean it will work for you,” Reese said. “Coconut oil on your face—don’t do it. There are thousands of pores on your face compared to the rest of your body, making your face more susceptible to clogged pores, which leads to acne. It’s just not worth it. There tons of great moisturizers out there that are better for your skin.”

» Related: How to Take Care of Your Skin: 10 Steps to Good Skin

Can You Put Coconut Oil on Your Face? Experts Discuss Pros and Cons