Think you found a great deal on your favorite brand name cosmetics?

There’s a chance that you might be about to purchase a Chinese knockoff masquerading as the real deal.

Counterfeit versions of name-brand makeup, including MAC, Benefit, and Urban Decay, along with skin creams, hair care products, perfumes and even injectables such as Botox, are being sold online at steep discounts.

The only problem? Seized samples of knockoff products have tested positive for some disgusting and dangerous ingredients.

According to warnings released by the City of London police, the FBI, and the BBC, various counterfeit cosmetic products made in China have tested positive for the following:

19-Times the Legal Limit of Lead

However, when it comes to chemicals in cosmetics, there’s a saying that “the dose makes the poison.” Meaning counterfeit makeup products containing 19-times the legal limit of lead could make you seriously sick.

Related: Is That Going to Kill You? Why Our Fear of Chemicals In Cosmetics Is Unfounded

Lead can build up in the human body over the months, leading to lead poisoning. In adults, lead poisoning can cause memory loss, joint and muscle pains, and headaches. Even scarier, pregnant women risk miscarriage or premature birth if they are exposed to too much lead.

Knockoff Benefit Eye Bright pencil, bareMinerals Mineral Veil foundation powder, and Bad Gal Lash mascara all contained traces of arsenic in them. For reference, Arsenic is a toxic element that can cause abdominal pain, shock, and even death.

The conditions in which counterfeit cosmetics are made is often unhygienic.

Not just by manufacturing standards, but we’re talking basements, backrooms, and filthy factories that don’t take a discerning eye to see that they’re downright dirty.

Just check out this image of a Chinese counterfeit perfume shop snapped by the London police: 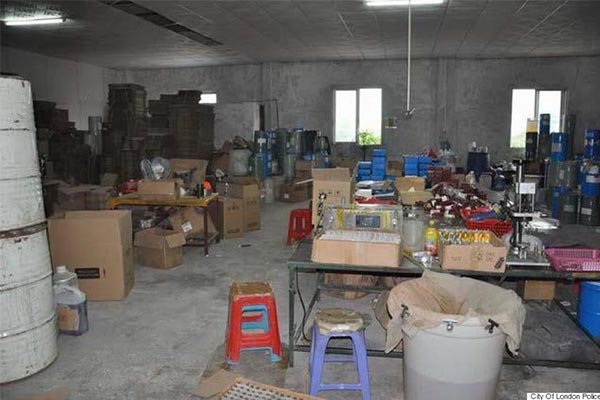 Due to the lack of hygiene standards in the makeshift factories where knockoff cosmetics are made, a frequent risk is that products contain dangerous amounts of bacteria. One bacteria identified in the FBI’s report is E. coli.

E. coli can cause severe diarrhea, as well as kidney failure and anemia. Some of the E. coli strains can also cause urinary tract infections.

If that doesn’t put you off of buying knockoff lipsticks, know that the bacteria is spread through fecal matter.

Also, that reports on raids of the illegal factories where these counterfeit cosmetics are made have stated that workers don’t wear gloves, or have access to sanitation areas with which to wash their hands.

Counterfeit Benefit Bad Gal Lash mascara that was seized and tested was found to contain high amounts of the dangerous element mercury.

While mercury is found naturally in the earth’s crust, it is highly toxic, and it can harm the heart, kidneys, immune system, lungs, and brain.

It can also cause skin rashes, muscle weakness, headaches, and insomnia. In eye makeup, it can permanently damage your vision.

Aluminum is considered safe at low levels and is a common ingredient in deodorant. However, it can accumulate in body tissues and the brain.

Over time, exposure can lead to bone disease, fatigue, memory loss, dementia, and numerous other problems.

Whether the rat poop has been added to the makeup intentionally or is due to filthy work conditions is unclear in the numerous reports on finding this particular ingredient.

One thing can be sure: rat droppings contains bacteria that most consumers wouldn’t willingly put on their skin.

According to the Daily Mail, paint stripper has been found in some of the counterfeit mascaras and liquid eyeliners.

For perspective, some of the known hazards associated with paint strippers are respiratory damage from breathing in the chemicals, skin diseases, and damage to the brain, nervous system, and to internal organs.

Generally speaking, this isn’t an ingredient that you want to get onto your skin or into your eyes.

Thought it couldn’t get any worse?

The FBI warns us that, “Counterfeit fragrances have been found to contain something called DEHP, classified by the Environmental Protection Agency as a probable human carcinogen.

“These phony perfumes and colognes, which sometimes contain urine as well, have been known to cause serious skin rashes.”

Apparently, knockoff perfume makers can’t be bothered to use the same stabilizers used by perfume brands to make sure that those delicate scents don’t expire.

Instead, they substitute human urine which, it should go without saying, is rather unsanitary and can cause skin problems.

The Risks of Knockoff Cosmetics Include Rashes, Allergic Reactions, and Scarring

Here’s the thing: Knockoff cosmetic manufacturing isn’t the same as when Forever 21 makes clothing that’s an obvious ripoff of a designer’s collection. There are no chemists hunched over in a dark back alley basement mixing up batches of eyeshadow and lipstick for less.

These products are made by criminal gangs. They don’t care what goes inside as long as it looks like the real thing, and to heck with the consequences.

Which is exactly how one ends up with human urine as a stabilizer in perfume and mercury in mascara.

But, while these guys are getting rich, customers who buy knockoff cosmetics are enduring some awful consequences, including acne, allergic reactions, chemical burns, hair loss, and permanent scarring.

The level of toxins found in some batches of counterfeit cosmetics could even lead to high blood pressure or infertility. If you’re pregnant, these nasty ingredients can also harm your unborn child.

Where are Knockoff Cosmetics Commonly Sold?

You’re probably thinking, “Okay, no worries! I’ll just abstain from purchasing any cosmetics in China.” Unfortunately, knockoff cosmetics are coming to you.

The City of London police issued a national alert after discovering a shipping container filled with more than 4,700 counterfeit versions of MAC products including foundation, lip gloss, eyebrow pencils, bronzer, and eyeshadow.

It turns out that the distributors of knockoff makeup receive these large shipments, then turn around and sell the products on websites such as eBay and Amazon.

How common are counterfeit cosmetics? The Daily Mail bought a bag of randomly selected designer make-up on eBay and Amazon, all being sold as ‘new’ at bargain prices. Eight out of the ten products turned out to be fakes.

A quick side note: They had those eight products tested by Staffordshire Scientific Services, a lab used by trading standards officers.

Each product tested positive for unhealthy levels of various chemical additives, including lead, mercury, arsenic, and copper “as well as worrying levels of bacteria.”

See Also: How to Never Fall for Another Anti-Aging Product Scam Again

Where else are counterfeit cosmetics sold?

Canadians received a similar warning about the dangers of purchasing counterfeit beauty, skincare, and other health products after a woman was hospitalized due to a severe allergic reaction to a MAC product she purchased at local a flea market.

A large volume of counterfeit cosmetics is sold on the Chinese chat application WeChat through peer-to-peer sales.

While there have been no reports of fake makeup sold to people overseas from WeChat, it’s worth noting the name, as the app is growing in popularity and already boasts over 100 million WeChat users outside China.

The only way to avoid knockoff cosmetics is to purchase products through the brand’s official store or via an authorized retailer.

It’s important to note “authorized.” That’s because you can find a ton of counterfeit cosmetics on a website you’ve probably never heard of, but there’s a chance a small scale retailer that you shop from already uses.

It’s called Alibaba, a monolithic wholesale shopping website based in China and chock-full of every knockoff under the sun.

In fact, many of the supplements or knockoff beauty devices you come across are purchased from Alibaba in bulk and then sold on pop-up websites until they receive enough complaints to turn tail and run.

Bottom line, don’t assume a product is genuine just because it’s being sold on an English-language website, at your local flea market, or even on well-known sites like eBay and Amazon.

How to Spot Knockoff Makeup and Cosmetic Products?

In interviews, we came across several consumers who suffered allergic reactions to counterfeit cosmetics mentioned that they thought something was off, but brushed aside their suspicions.

“The makeup packaging seemed odd. I remember thinking the fonts of the logos didn't look quite right and the actual products were definitely dodgy,” says a woman identified as Lo to Mashable.

Related: Don’t Fall for a Designer Knock Off Prom or Wedding Dress Scam

If you do find yourself shopping discounted cosmetics, try to learn as much about the product from an authorized seller before buying. Pay special attention to details in the packaging, including fonts, colors, and even the placement of codes.

For example, most cosmetics packaging is protected by a clear plastic wrap. If you look carefully, you can find that some print a serial number on the clear plastic wrap, itself. (Perfumes often do this. To find, check the bottom, near the fold.)

You might get lucky and spot an obvious mistake, such as a misspelled name or a “Made in China” label. Other times, the difference is less obvious, such as packaging that feels cheap, and you need to trust your gut.

If you’re unsure, call a brand representative or inspect a product in the store to learn where you should look.

It turns out that some bargain-happy consumers are buying more than makeup online. One article made mention of Botox and other injectables such as Restylane or Juvederm being sold online.

Not only is doing so a complete ripoff, since these products are not available to the general public, but it also puts you at risk of some seriously nasty side effects.

Just like knockoff makeup, samples of confiscated counterfeit injectables have tested positive for carcinogens and bacteria as a result of unhygienic manufacturing facilities and packaging that is inadequately sealed, allowing bacteria to multiply.

Bottom line, if you want a Botox or another filler, you need to go to a board-certified practitioner. If you see it for sale online, it’s fake, and it’s dangerous.

Remember, the following are indicators of counterfeit cosmetics:

Dermatologist, Dr. Robert Buka, wants to clear up any doubt left in your noggin that counterfeit cosmetics pose a real risk, warning that using these chemical-laced and bacteria-laden products has real risks:

“I see about two to three cases of counterfeit makeup dermatitis in my practice every month,” says Dr. Buka. “One patient developed an infection after using a fake MAC product, leaving her scarred for life.”

As unpopular as it may sound, paying full price for a name-brand cosmetic from either an official store or a fully-vetted, authorized retailer is the only way to ensure your safety. If the prices are too steep, there are always holiday sales and clearance items.

Finally, don’t forget that expensive brands aren’t the only option! Check out Real-Deal vs. Knockoffs: Drugstore Dupes of Your Favorite Cosmetics to learn about safe, budget-friendly duplicates of popular cosmetics at drug-store prices.