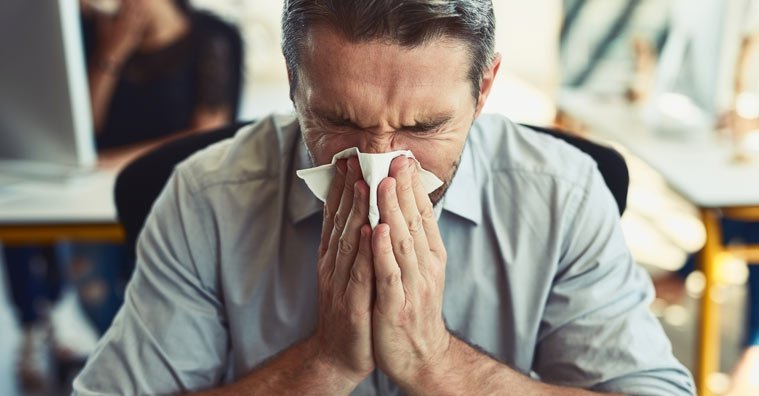 People who suffer from allergies know just how annoying they can be. But the symptoms can go far beyond a sniffle – and be mild to life-threatening depending on the severity.

Fortunately, allergy sufferers who become more educated about their allergies and use preventive measures can impact their outcome significantly.

This guide takes a comprehensive look at how to survive the spring allergy season. We’ve obtained input from three Medical Doctors for this topic, including a Chief of Staff, a Board Certified Allergist, and a specialist in the field of allergy and immunology.

We explore several sub-topics, including signs and symptoms of allergies, how long spring allergy season lasts, ways that allergies can have a negative impact on your life, natural and traditional treatments for allergies, and things you can do to help diminish the potential impact of allergies.

It’s important to keep in mind that this article is not intended as medical advice. Before you proceed with any treatment for allergies, talk to your primary physician, first.

Symptoms and Signs of Spring Allergies

During pharmacy school, Dr. Negusse studied and mastered the area of allergies in order to understand how the medications reverse the disease state at the molecular level. He further refined his training in this field during medical school and has been caring for patients with allergies in the emergency department.

“Some patients can have systemic symptoms including malaise, generalized weakness, irritability, fatigue, and decreased appetite,” Dr. Negusse said. “Some of the signs that the doctor may notice include edematous, inflamed nasal mucosa that are boggy and violaceous, nasal polyps, conjunctival erythema (red eyes) and allergic shiners (dark, puffy lower eyelids).”

Allergies can also cause an “allergic crease” across the bridge of the nose, ear fullness, facial pressure, and sore throat, said Dr. Marc Tamaroff, a Board Certified Allergist who’s in private practice at the Allergy and Asthma Care Center in Southern California, and who works as an associate clinical professor of medicine at the David Geffen School of Medicine at UCLA.

How Spring Allergies Can Have a Negative Impact on Your Life

Allergies can affect every aspect of the patient’s life, Dr. Negusse said.

First, the patient often is up all night dealing with symptoms, which results in poor sleep and fatigue the next day, he said. In turn, the patient’s performance at work or school is significantly impacted.

“Individuals with prolonged symptoms and severe symptoms are especially affected and they can lose their jobs and be held back in school,” Dr. Negusse said. “Partners of the patients are often affected as well due to snoring that is caused by the allergies.”

Patients often struggle in making the decision to go outside or not, as a severe allergy attack can occur, which impacts daily outdoor activity, leaving many patients unable to enjoy what the outdoors has to offer, he noted.

“Many patients are unable to play in the park, jog in the neighborhood, go for a walk outside and participate in recreational activities,” Dr. Negusse said.

Some patients are also embarrassed by daily appearance as they have red eyes, constant tearing, a runny nose, and bags under the eyes.

“These symptoms also give the impression that the patient has a contagious cold or disease and affects the patient’s social environment,” he said.

Additionally, some of the medications cause sedation and can prevent the patient from driving or from performing activities that require concentration.

Some types of allergies may bring more stress and anxiety, such as those with severe food allergies, especially if it is associated with anaphylaxis, a life-threatening allergic reaction, added Dr. Tamaroff.

“These effects can extend to family members of allergic sufferers,” he said. “Research has found high levels of anxiety and stress in mothers of children with food allergy.”

When Is Spring Allergy Season?

According to Dr. Negusse, this can vary from based on regions of the country.

“Spring allergy symptoms can start as early as February and usually taper by the end of May,” he said. “It typically lasts 3 to 4 months, but this varies depending on the region. Symptoms can also be year-round – the cause of the allergies is the result of indoor allergens.”

The answer depends somewhat on where you live, Dr. Tamaroff said. For instance, in areas where there is frost and snow, allergy seasons have a defined beginning and end.

“In more temperate climates like Southern California, exposure to pollen may cover most of the year,” Dr. Tamaroff said. “In the north and east United States, tree pollens are released in the air between March and May, grass pollens from mid-May through June, and ragweed pollen mid-August until early October. Indoor allergens, including dust mites and pet danders, can trigger symptoms throughout the year.”

There are several factors that determine the severity of allergy season year to year, which we discuss next.

Dr. Sonal R. Patel, a specialist in the field of allergy and immunology with Adventist Health Physicians Network in Los Angeles, noted that according to the American College of Allergy, Asthma and Immunology, 23.6 million Americans were diagnosed with hay fever during the course of last year.

The prevalence of allergies is rising, with up to 30% of adults and up to 40% of children having at least one allergy, said Dr. Patel, who is a member of the American College of Allergy, Asthma and Immunology – ACAAI.

The following factors, provided by ACAAI through Dr. Patel, may have an influence on how severe each allergy season is, ultimately determining the number of people being diagnosed for allergies.

In further advice, Dr. Tamaroff said that nasal saline rinses are a very effective way to relieve congestion and flush out mucus. Other treatments that may help include extracts of the shrub butterbur and spirulina, a type of algae, by blocking the release of histamine.

“However, the benefits and safety of these extracts aren't clear,” Dr. Tamaroff said. “Some butterbur products contain an ingredient that can damage the liver and lungs. It may cross-react with ragweed, marigold or daisies and cause allergic reactions in sensitive individuals.”

Green tea is also a natural antihistamine, he noted, and adding cayenne pepper or hot ginger to meals may help with decongestion.

He agreed with Dr. Negusse that Quercetin blocks the production and release of histamine.

“Please note that Quercetin may interfere with certain medications, including antibiotics, cyclosporine and other medicines metabolized by the liver,” Dr. Tamaroff said, adding that some people claim acupuncture can help with seasonal allergy symptoms. “There is some evidence that acupuncture works, and there is little evidence of harm.”

These allergen avoidance measures include washing bedding, removing all stuffed animals from the bedroom, and maintaining the relative humidity in the bedroom to between 35% and 50%. Frequent vacuuming and replacing carpeting with hard surface flooring can also help.

“As for medicines, there have never been more over-the-counter options than now,” said Dr. Tamaroff.

Oral antihistamines, like Claritin, Zyrtec, Allegra or Xyzal, work by binding to the histamine receptor, thus blocking the attachment of histamine to certain cells in the body.

“This prevents the activation of those cells leading to inflammation. Antihistamine medications are also available in nasal spray form or as eye drops,” Dr. Tamaroff explained.

Topical and oral decongestants reduce nasal swelling and runny nose by constricting blood vessels, he said, and intranasal corticosteroids are an extremely effective form of treatment for allergic rhinitis.

“These medicines reduce chemical release from allergic cells and prevent the influx of allergic cells into nasal tissue,” said Dr. Tamaroff, noting that this reduces inflammation in the lining of the nose.

Leukotriene receptor antagonists, including montelukast and zafirlukast, reduce nasal allergy symptoms by blocking the action of leukotrienes, which are fatty signaling molecules that the body produces when there is inflammation.

“After consultation with a trained allergy specialist, allergen immunotherapy/allergy vaccination is a longer-term solution where tiny amounts of the allergen are injected over time, provoking an antibody response,” Dr. Tamaroff said. “It has been documented to reduce cell mediator release, an influx of allergic cells, and circulating levels of the allergic antibody, Immunoglobulin E.”

Dr. Tamaroff said there are preventative things that one can do, “mostly common sense sorts of things.”

He also recommends showering before bed so that you don't carry pollen and dust left on your skin and in your hair into bed with you, and wash clothes and bedding to limit incidental exposure to allergens.

“Pets that spend time outdoors come into the home covered in pollen,” Dr. Tamaroff said. “Wipe them down with a damp washcloth to limit exposure to pollen and to dust.”

Carpet attracts and keeps dust and pollen that is difficult to remove with a vacuum.

“Check the weather,” he said. “In general, pollen counts are highest on warm and breezy morning and low on cool and rainy days.”

“If you can, exercise after mid-day when pollen counts tend to be lower,” Dr. Tamaroff said.

“Sometimes, opt for less intensive activities. The more stressful the exercise, the faster you breathe, the more allergens and irritants you inhale. If exercising outdoors on a cold day, cover your mouth and nose with a scarf to help warm the air before it gets into your lungs. On bad days, exercise indoors.”

Final Thoughts: Is There Hope for Spring Allergy Sufferers?

“Absolutely,” Dr. Negusse emphasized. “Patients that have allergies can have a significant impact on their outcome. Those who are aggressive with preventive measures, use both natural and when needed traditional treatment, actually do very well.”

Dr. Tamaroff believes the future is bright for sufferers of nasal allergy.

“In the years since I started in practice, I have seen an exponential leap in our knowledge of the workings of the immune system,” Dr. Tamaroff said.

This has led to incredible discoveries about disease processes and how to combat them in very novel ways.

“For example, a change from the traditional immunotherapy given by injection is sublingual allergy therapy,” Dr. Tamaroff said.

It is now available in the United States and its use is likely to become more widespread as experience with it grows and more allergens can be treated this way.

“It uses the same concept as the allergy shots but in a different delivery system,” Dr. Tamaroff explained.

Also, since the introduction of omalizumab (Xolair) 15 years ago, use of immunomodulatory treatment has shown particular promise.

“These include the use of targeted therapies towards specific segments of the immune system, like adhesion molecules or cytokines, that may refocus the immune system away from an allergic-type response,” Dr. Tamaroff said. “In the meantime, there is much that the doctor can do for the allergy sufferer right now. A consultation with an allergy specialist can be a good step in the right direction.”

Allergies are the leading cause of chronic illness in the United States and impact nearly 50 million Americans, Dr. Negusse added.

“The symptoms can be mild to life-threatening,” he said. “It can have a significant impact on the quality of life. Patients that actively visit with their doctor, become more educated about their allergies, use preventive measures tend to do well and can impact their outcome significantly.”