Have you ever had to sit through a long, drawn-out sales pitch before? Whether someone was trying to sell you a timeshare or a trip around the world, their presentation may have taken a couple hours—or longer—to wrap up.

And the whole time you were probably thinking to yourself, “I just want to get my free gift and head out the door!”

Despite how annoying (and obnoxious) these lengthy sales pitches can be, the fact of the matter is that they work.

This is why you’ll find the same basic techniques used not just in live sales pitches, but in all kinds of sales media, such as mailed letters, commercials on TV—and in websites and online videos, which is what we’ll talk about here.

But compared to a lot of other content you’ll find about this topic, we’re going to take a deep dive into the why of long sales videos: why they’re used, why they’re so effective, and why you should put your thinking cap on when watching one.

Long before the internet and television were around, one of the most popular methods companies used to advertise their products and services was through something called direct mail (also known as ‘junk mail’); e.g. sending mail, usually unsolicited, directly to consumers.

This mail might involve “a wide variety of marketing materials, including brochures, catalogs, postcards, newsletters and sales letters.”

Even today, with instant access through the world wide web, direct mail is still considered “one of the most effective and profitable ways to reach out to new and existing clients,” because it “allows you to control who receives your message, when it's delivered, what's in the envelope and how many people you reach.”

In layman’s terms, because direct mail allows companies to enter the mindset of customers who need their product the most, it’s typically a great way to boost sales.

In general, short form references advertisements that are “simple and without much substance,” while long form ads are “substantive and rich in information about the product it’s promoting product.

They provide useful information to consumer[s] to help them as they make their buying decisions. They do not pretend to be entertaining because that’s not their job. Their job is to inform and educate.”

In a nutshell, short form advertisements are intended to quickly capture a consumer’s attention and make them remember a product, while long form advertising is geared toward helping consumers become part of a narrative.

In other words, actively involving them in the story you’re telling. Remember this, because we’ll come back to it in the next section.

While there’s no universally accepted guideline, short form advertising is generally no more than 30 seconds in length (100 words or less in written form), while “most experts peg [long form advertising] at 1,200 to 2,000 words.” Or, about 8 to 13 minutes in a video.

The Main Characteristics of a Long Form Sales Letter

Despite the length of time companies have used long form sales letters in their marketing strategies, the basic format hasn’t really changed: 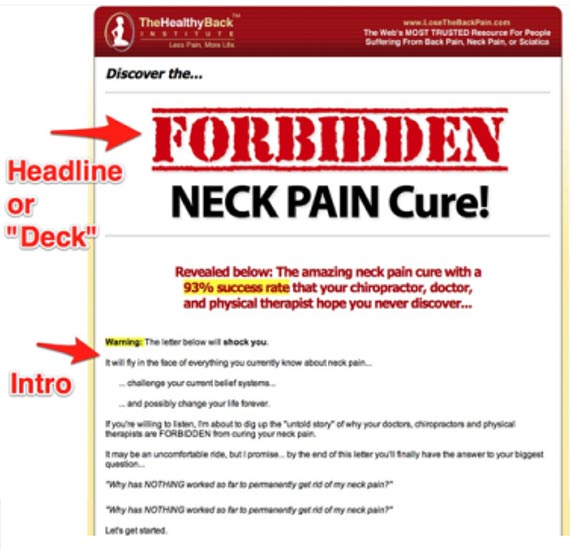 Now, let’s find out how the core techniques of these long form sales letters have morphed into the modern age.

Despite their almost universal format, the really cool thing about long form sales letters is that they’re extraordinarily adaptable.

As such, they’ve changed with the times, and are now used for modern online landing pages, infomercials, and even as scripts for narrated videos.

But here’s a catch: Remember how we discussed the central role of long form sales letters above? That they’re intended to “inform and educate”?

This idea is based on the principle that “the more you tell, the more you sell;” e.g. by “answering the most frequently-raised objections, building rapport, presenting benefits, [and] building urgency,” you’ll be able to convince customers that you’re product is worth buying.

Well, many modern long form sales videos—especially among the products we review here at HighYa—completely turn this idea on its head.

Instead of using facts to wrap customers up in the story, they’ll pull on your emotional strings to get you to hand over your money. They’re just as long as traditional long form videos, but instead of facts, they’re filled with a bunch of creative wording and hype-filled content.

But wherever you find them, the good news is that long form content almost always shares the same basic characteristics.

We already discussed this briefly before, but let’s take a closer look here so you can understand when you’re being sold through information, instead of through emotion.

Let’s use Diabetes Free, a health-related e-book, as our example.

First, we’re given a textbook example of how a long form sales letter headline can be used in an online video, with the goal of informing and grabbing the reader’s attention.

In just a few seconds, we quickly understand what the product is, what it does, and want to learn more. After all, controversy sells. 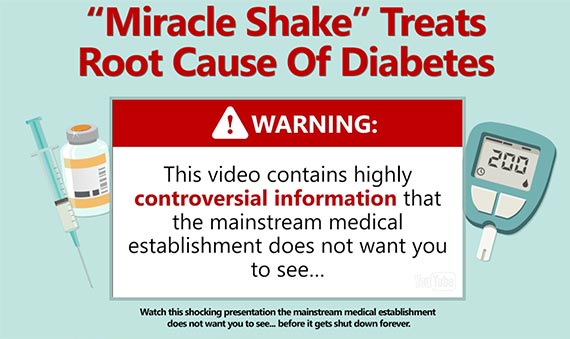 Right off the bat, we immediately know what Diabetes Free is, how it claims to benefit us, and piques our interest to learn more; all key characteristics of sales letters that have recently transitioned over to long form videos.

Then, just a few seconds later, we learn that if we just “commit the next 6 minutes to this presentation,” we’ll be able to learn about a 100% natural, scientifically proven way to reduce the impact of diabetes on our life.

In a long form sales letter, this might have been considered the sub-heading, although it’s generally more effective as a short introduction when used in long form videos. 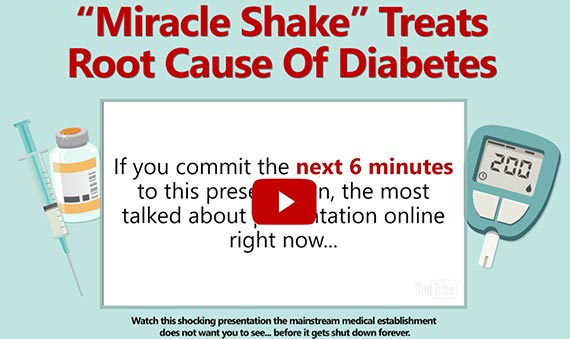 Next, we learn exactly how long this video will last, and what we’re supposed to gain from watching the whole thing.

Up until now, we haven’t deviated much from the information-based approach of traditional long form sales videos and letters. But when it comes to many of the products we review here at HighYa, the next section is where things change for the worse.

We know you’re busy, so we’ll cut right to the chase. Instead of delivering on their promise to provide everything you need to make an informed decision, less-than-stellar long form videos consistently follow a specific pattern to keep you hooked:

No matter how long a sales video is, whether 2 minutes or 12, it’s really just this same pattern used over and over again. Let’s take a look at a prime example of the Diabetes Free video doing just this.

In this instance, we’re led to believe that if we just spend 6 minutes watching the Diabetes Free video, we’ll learn the secret to curing diabetes. Take notice that they’re not coming right out and claiming this; they’re only implying it. 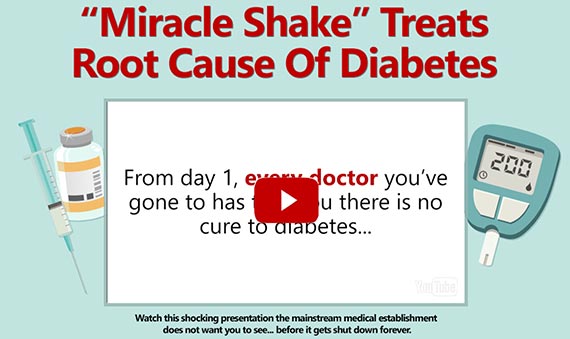 Based on this wording, most viewers would reasonably believe that the information found in Diabetes Free can help them cure their condition. But is this really what they’re claiming?

But instead of actually providing evidence showing Diabetes Free can cure your diabetes, we’re repeatedly just given broad, scientific-sounding words that might make us feel like we’re learning something, but that ultimately provide no useful information.

Then, we’re quickly (almost imperceptibly) wrapped back up in “Dr. Pearson’s” story to distract us from this fact, a process that's repeated time and time again. 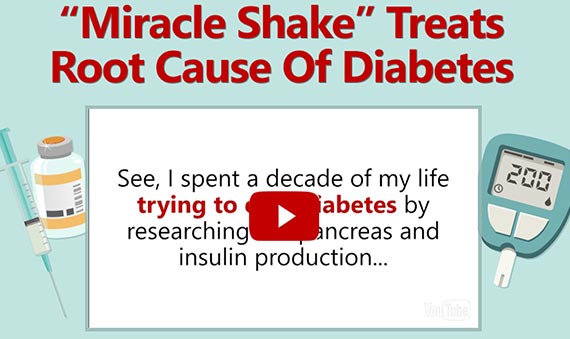 Just when we think that the Diabetes Free video will deliver on its promise, “Dr. Pearson” starts telling another story that diverts our attention away, fueling our emotion instead of our brain.

Part 4: The Conclusion & Call To Action

After putting you through several rounds of this 1) teasing statement, 2) emotional story, 3) failure-to-deliver circle, these types of long form videos will attempt to quickly recap what you learned in their conclusion.

If you’re left scratching your head about what you actually learned at this point, you’re certainly not alone.

Why? Because here again, since much of what you “learned” only amounts to a handful of loosely based stories, they’re only recapping emotions, not facts that you can use to make a better buying decision: 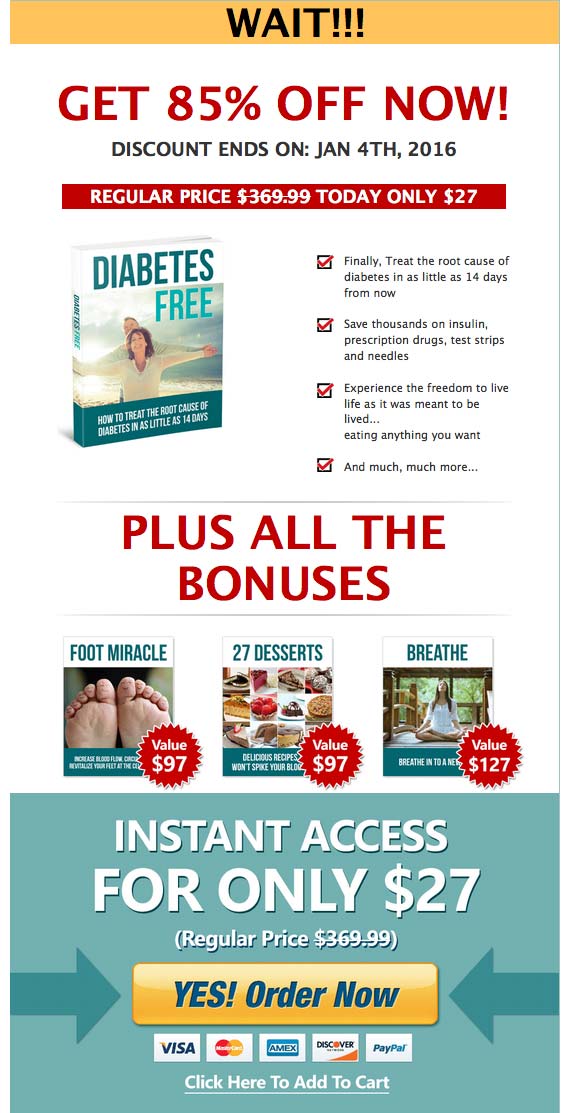 The conclusion of many long form sales videos isn’t much different than the rest of their content: you’ll still be sold on emotion instead of information.

Alright, we’ve gone into a great deal of detail about how long form sales videos work, why they use emotion instead of information, and why you should be wary.

But in the real world, how can you use this to make smarter purchases? That’s exactly what we’ll cover next.

How to Cut through the Hype of Long Form Sales Videos

Given everything we’ve discussed so far—as well as the fact that many of these products come with rock-bottom online customer reviews—it’s our opinion that long form sales videos are generally a less-than-stellar form of advertising.

Or, at the very least, less-than-stellar companies tend to use hype-filled long-form videos to sell their products, giving them a poor reputation.

But this doesn’t mean that all products sold through long form videos aren’t worthwhile. Just like we do with every product we review, you should give them a fair shot before making up your mind.

So, how can you tell the difference between a long-form product that’ll deliver and one that’ll end up a dud? Ultimately, it all comes down to 3 important tips:

Over time, as you watch more and more of these long form sales videos, you’ll develop an innate sense about their overall reliability after just a couple minutes. Until then, it’s only fair that you watch the whole presentation (yes, we know this can be painful).

But don’t watch aimlessly; watch with the intent of fully understanding the product and its claims. How can you do this?

When watching a long form sales video, be sure to keep a pen and paper nearby so you can take notes throughout. Based on what we’ve talked about today, here are some important factors to consider:

Even if you’re only remotely interested in advertising, this part can be really fun. Why?

Because with a little practice, you’ll be able to pick up on very subtle shifts these companies use to guide your perspective (such as seamlessly transitioning to a story when you’re expecting a quick answer) and mentally prime you for a sale.

Think of it as sharpening your purchasing superpowers! Speaking of perspective, let’s talk about mindset.

Continuing to reference our example above, do you have a conspiracy-minded outlook? Do you believe that big pharmaceutical companies purposely hide cures for diseases in order to line their pockets?

Do you typically believe many common ailments are fully treatable by foods or homeopathic remedies? And do you still believe these things in spite of evidence to the contrary?

If so, then despite all the negative feedback many of these products receive from customers, your confirmation bias might cause you to overlook potential problems (such as the fact that they provide zero evidence to support their claims).

And as a result, you might feel scammed if a long-form video product doesn’t deliver on its promises.

How to avoid this? Like the ‘active video watching’ we discussed earlier, you can also actively watch your mindset when you’re researching one of these products.

For example, if you want to learn whether or not there’s a cure for diabetes, don’t immediately believe the information you read just because it aligns with your perspective, or with what you’re told in the video.

Instead, take the time to ask yourself: Is there clinical data showing diabetes can be cured? If so, both types? Who’s telling me this information? What are their credentials? Based on the available evidence, what’s the most rational conclusion?

To boot, by monitoring your confirmation bias, you’ll also be removing much of the emotion from the equation. And since this is the primary selling method used by sub-par sales videos, it’ll be easier and easier for you to avoid becoming their next victim.