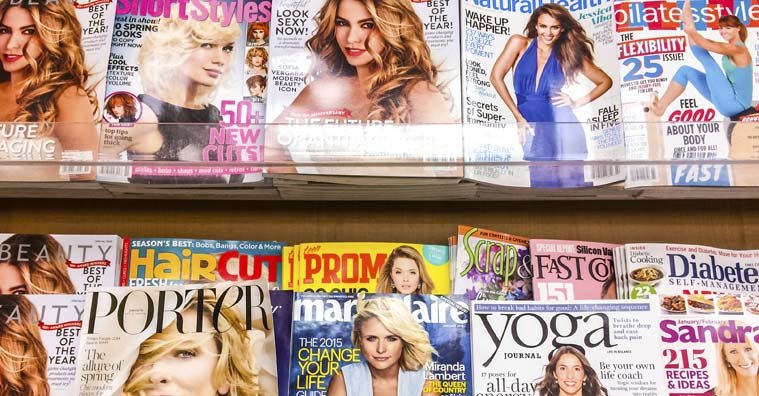 Image manipulation is everywhere, and it’s not just being used to make your coworkers’ vacation pictures appear more enticing.

From plastic surgeons using doctored photos of their results to vacation resorts cleaning up their beaches without filling a single garbage bag, brands big and small use Photoshop to sell a fantasy—hoping that it will entice more buyers.

While some companies have begun taking the initiative to speak out against the use of photo manipulation when advertising their products — including Aerie and Dove — plenty of others leave you guessing as to the authenticity of their images.

Manipulated images are so prevalent that exposing them has become entertainment on sites like Photoshop Disasters. In this article, we will outline five tips that will show you how to tell if a picture has been photoshopped.

Why Heavy-Handed Photo Manipulation Is a Problem

“Seeing is believing” might be a classic idiom, but the expression has found a more contemporary implication in an area of digital photo editing. And consumers aren’t the only ones concerned.

For the past five years, the British government has been trying to decide whether or not advertisers should be forced to divulge when images of fashion or cosmetics models have been Photoshopped.

Writing for Huffington Post, Brent Green notes that the issue isn’t only falsely advertising a product’s efficacy, but the concern that “many consumers do not consciously realize that scores of models in magazines today are ‘neither real nor attainable.’”

The British Advertising Standards Authority (ASA) wasn’t all talk, either. In 2013, they took action to ban a print advertisement promoting a Nivea anti-aging cream on the basis that heavily manipulated images were misleading and exaggerated the effect of using the product.

Action to protect U.S. consumers has been slower going, although the National Advertising Division (NAD) did force CoverGirl to pull an advertisement in 2011 relating to their NatureLuxe Mousse Mascara, which promised to provide women’s lashes with “2X more volume.”

According to the NAD ruling:

“… NAD was particularly troubled by the photograph of the model – which serves clearly to demonstrate (i.e., let consumers see for themselves) the length and volume they can achieve when they apply the advertised mascara to their eyelashes. This picture is accompanied by a disclosure that the model’s eyelashes had been enhanced post production.”

The problem faced by consumers is that the NAD can’t possibly catch every advertisement that’s been heavily manipulated before many have had a chance to make a purchase. Meaning that, until there’s a de facto ban on Photoshopping cosmetics advertisements, consumers are still forced to “see for themselves.”

So, how can you know what images are authentic, and which have been doctored beyond recognition?

How Can You Tell If a Photo Has Been Edited

Lifehacker tells us that, “When it comes to detecting an altered photo, your eyes are really your best asset. Without practice, they'll fool you. But you can train yourself to start noticing the little imperfections and oddities that'll point right to a manipulated photograph.”

Like what? While not foolproof, here are a few tells that a keen eye can use to spot manipulated images:

Image manipulation is the darling of cosmetics and anti-aging brands, as they promise you smooth skin, longer lashes, or a cure for wrinkles and crow’s feet. In fact, a retoucher working on a close-up image might spend days getting everything just right. 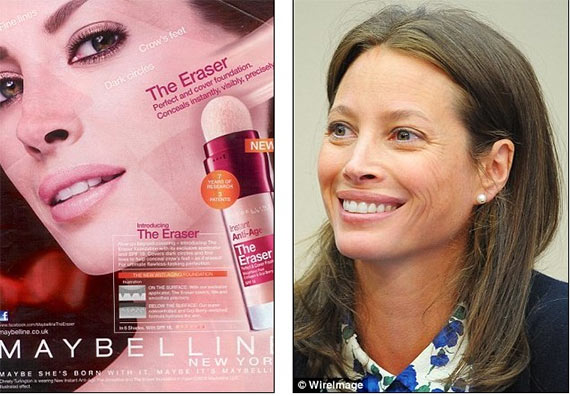 What to look for: Experts warn not to depend on spotting pores, since a great retoucher can bring them forward so that skin’s texture appears consistent. Instead, look for a complexion that’s completely porcelain and blemish-free.

There’s no denying that our culture values thin. Smaller sized bodies are used to sell everything from the obvious, such as weight loss products, to simply bolstering a brand’s image.

Ironically, this photo is from the May 2014 edition of Oprah magazine, which boasted a cover story all about accepting and appreciating your body the way it is. 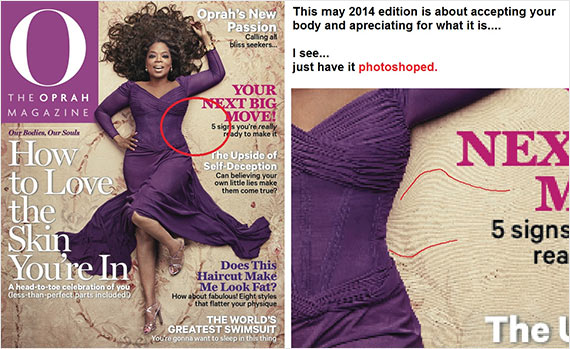 What to look for: Certain visual characteristics are difficult to successfully duplicate and can be red flags that a photo has been tampered with. One such indicator is bent or liquid looking surfaces that should otherwise appear solid.

Straight edges, corners, wood grain, and tiles are all difficult to keep in the right perspective when working with Photoshop. Especially if the subject of a photograph has been changed, objects in the background might not appear as straight as they should be.

Another tell? Photoshopped non-human faces can also be identified by focusing on edges and blending — particularly when spotting trickery that’s been used to make a model appear little in the middle. 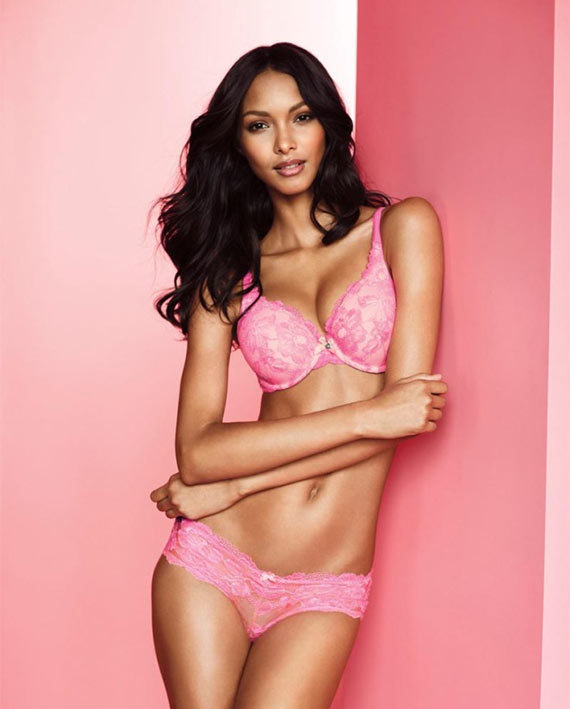 Check out the area where the above model’s ribs should meet her hips—do they match?

It’s expected that images of models will have been altered, but ordinary pictures of furniture aren’t exempt from the advertising industry’s unrealistic beauty standards.

The image below is highlighting a product so badly that it fails to take into account the background, which shows it’s sundown. Realistically, the light should be significantly softer. However, photo editing makes the product pop out so badly that you can actually tell it is two images mashed into one. 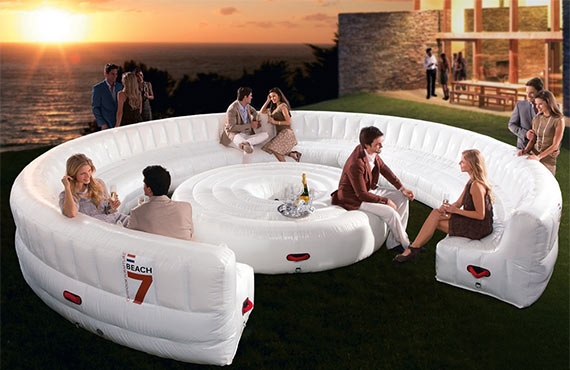 What to look for: Examine the way light interacts with the objects in the photo. Shadows and highlights will appear to violate the laws of physics, especially when a subject has been removed or added to a photo. An object that doesn’t cast a shadow is one common mistake, as well as subjects with highlights coming from a different direction than the light in the rest of the photo.

Image Error Level Analysis is a tool that creates a heat map-like image out of a JPEG that shows you the highest points of compression. Excessively Photoshopped images may contain JPEG parts that have been saved over and over again. This little tool will, in theory, detect those parts and highlight them for you. 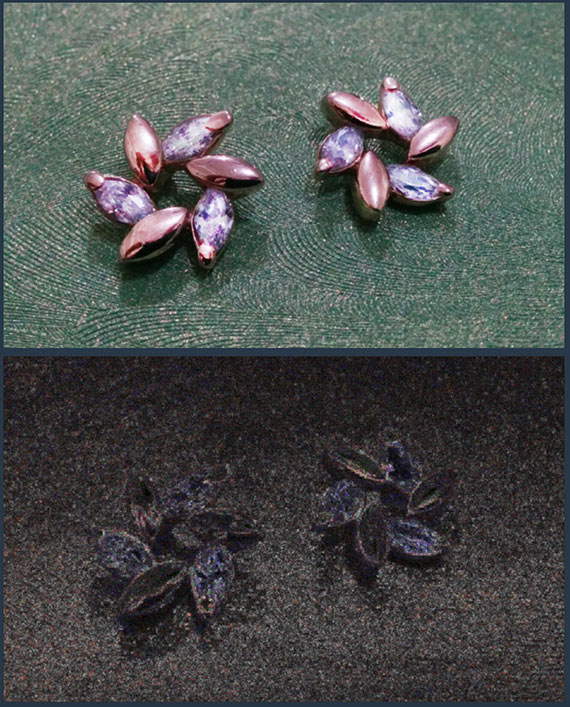 In the image above, the stones were manipulated to bring out their shine and sparkle. Using ELA analysis, though, we can see where some areas are brighter than others.

While not the most airtight method of discovering if a photo is doctored, a reverse image search can be useful. This is particularly helpful when attempting to spot obvious manipulations of an image’s color saturation like you might see if a vacation resort has tweaked their beach to appear unnaturally blue. 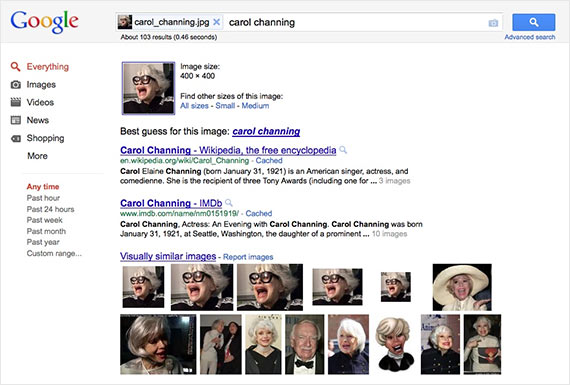 To do a reverse image search, just drag and drop a photo onto the Google image search bar to bring up all sources of an image. In the case of a photo that’s been manipulated, this can bring up the original image, or images that resemble the doctored photos, giving away manipulation.

Whether smoothing skin and erasing wrinkles or enlarging muscles and slimming waists, manipulating images of men and women to so-called perfection has become the norm in advertising.

Even though we might know that these images don't reflect reality, it’s still difficult to reject the desire to aspire to these biologically impossible ideals — especially when taking action is as simple as paying for a product.

Bottom Line? Don’t Depend on a Ban to Regulate Image Manipulation

British and U.S. regulatory actions banning advertisements sent a message to the beauty industry, but transparency in advertising is just one part of larger need to change a cultural ideal of perfection.

Likewise, being able to spot a manipulated image is only half the battle — we’re each responsible for how these images influence our purchasing decisions.

So, the next time you use the above tips to spot a touch of Photoshop, but still consider making the purchase, just remember: If a product did its job in the first place, it wouldn’t need manipulation in post-production.