Need an affordable way to keep an eye on your home while you’re away? Enter the Blink HD Home Monitor.

When paired with their Sync Module, each Blink unit gives you “instant home insight” by transmitting high-definition video clips directly to your iOS or Android smartphone as soon as motion is detected, or even if it gets too hot or cold! You can also peek in on your home using Blink’s Live View mode for anytime peace of mind.

And best of all, the Blink Home Monitoring system is completely wireless, so you can set it up in minutes and customize it to fit your needs:

Over the past couple of years, the home automation industry has grown by leaps and bounds. And as this technology evolves, it becomes increasingly powerful and less expensive, leading to ultra-affordable, easy-to-use systems like Blink.

But just because it’s inexpensive and hassle-free, does this mean you should invest in a Blink HD Home Monitoring system? And are there some important things to consider before you do? We’ll cover all of that in this review.

To begin, let’s take an in-depth look at the Blink system and its features.

The Blink System: Easy Is the Name Of the Game

At its most basic, the Blink system consists of three main parts: 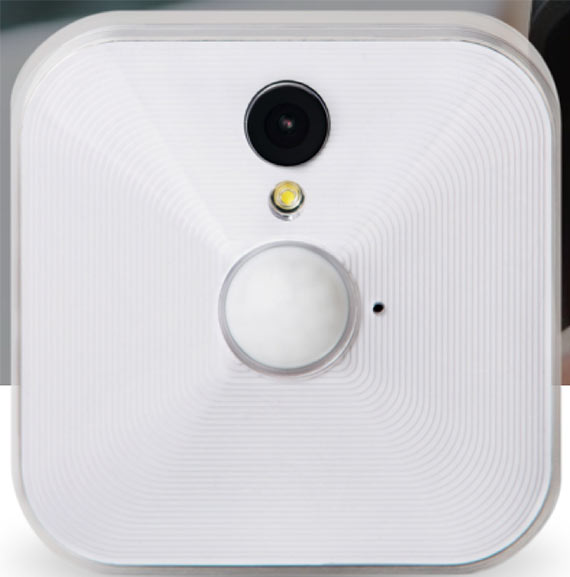 Using these components, you can customize the Blink Home Monitoring system to meet your needs. Because they’re wireless, each video unit can be placed on any level surface in your home, and even mounted in corners, on walls, or on the ceiling using non-permanent adhesive.

If motion is detected or the temperature gets too hot or cold (you’ll be able to adjust sensor sensitivity), Blink’s Instant On feature is programmed to record a 5-second video clip “within a fraction of a second” (which can be increased to 10 seconds if necessary) and then send you a push alert, with the video attached. Using the built-in microphone, each clip will feature full audio, as will any live streaming views.

Where does all this video go? For now (we’ll talk about upcoming features in a second), it’ll be stored on the company’s secure servers, which can keep up to 7,200 seconds of video (or roughly 1,440 five-second events). If this limit is exceeded, your oldest clips will be overwritten by any new ones.

The Blink Home Monitoring System will also send you a notification if your home’s Wi-Fi connection is lost or if it’s time to change batteries. Worried about privacy? According to the company, Blink’s cameras feature a “hardware-based LED indicator and optional audio alert let you know when Blink is recording, or in Live View mode, so you’ll never be caught off guard.”

How big can your Blink system get? According to the company’s FAQ, you can add up to 10 devices, with a “mix of cameras and alarms.” But we didn’t discuss any alarms yet, so what is the company talking about?

As of the time of this writing, the Blink system didn’t have any alarm capabilities, although the company claims you’ll be able to do this soon using their standalone battery-powered unit, which will feature a 105-decibel siren that can be customized for length and frequency.

This alarm will also feature an automatic arming and disarming function that can be handled remotely through the app. You’ll even be able to schedule arming/disarming in advance, “or create location-based rules to define when the system is active.”

Pro tip: These “location-based rules” will be implemented through something known as IFTTT functionality. In a nutshell, this means you’ll be able to program your Blink system to perform certain actions (after an alarm is triggered, for example).

Finally, remember how we talked about all video being stored on Blink’s servers? Well, they eventually plan to use the Sync Module’s on-board USB port to allow you to store video clips directly. You’ll even be able to pull clips from Blink’s servers and save them in your Module. When? As of now, sometime during Q2 of 2016.

Things You Should Keep In Mind About the Blink Monitoring System

Taking everything we’ve talked about so far together, we think there are some important considerations to keep in mind about the Blink system.

First, although Blink’s camera units are small, wireless, and can be placed just about anywhere, they’re not able to pan, tilt, or swivel (obviously you can move the entire unit, but the cameras themselves do not move). So, if one of your cameras accidentally gets bumped (when sitting on a bookshelf, for example), you won’t be able to adjust it remotely from the app.

How Big Can Your Blink System Get?

Next, we already mentioned that each Sync Module can support up to 10 Blink devices, such as cameras and alarms (once available). But what happens if you need more than this? It appears you’re out of luck. 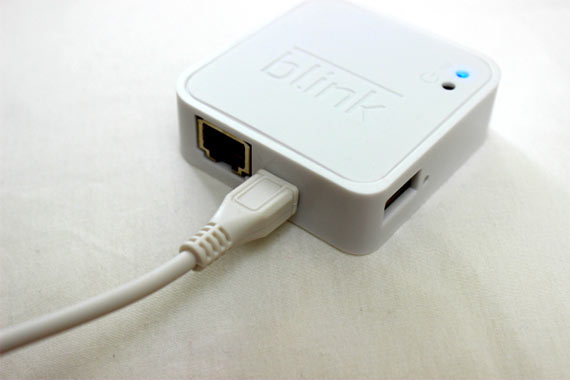 Blink’s Sync Module, which acts as a hub for the entire system. Image credit: SecurityGem.com

Sure, you could probably purchase another Sync Module, but then this begs the question: Can you connect to more than one module from a single app? Or, would you have to register one hub on one smartphone or tablet, and a second hub on another?

Blink Won’t Talk To Your Other Devices

Speaking of expansion, although it might be possible in the future, your Blink system won’t be able to communicate with any of your other home automation products.

So, although it features IFTTT functionality, you won’t be able to program a light to automatically turn on after a motion sensor is triggered (for example), or remotely turn on an appliance through the app. In our opinion, this is perhaps one of the biggest downfalls related to the Blink system, and might be a stumbling block for intermediate to advanced home automation aficionados (we’ll come back to this in the final section).

The good news is that if you’re a programmer, you might be able to create some of this functionality on your own through Blink’s API.

Lastly, although the upcoming ability to store video on your Sync Module certainly sounds appealing, it also means that you’d have to go around your house and manually download video from each camera in your system. Needless to say, this could be cumbersome and time-consuming.

With these considerations out of the way, what’ll you pay for a Blink HD Home Monitoring system?

Will Blink’s Price Make You Do a Double Take?

How much you pay for your Blink system depends on how many cameras you’d like (each system comes with one Sync Module):

Individual Blink cameras can also be purchased for $60 a piece.

As of this writing, Blink was set to start shipping the week of January 25th, 2016. Although anyone who purchased a system during their Kickstarter crowdfunding campaign (one of the top technology campaigns for 2014, raising more than $1 million) has probably already received theirs.

Each Sync Module will include 1 USB cable and 1 power adapter, while each camera will include 2 AA lithium batteries and one mounting kit (mounting bracket and double-sided adhesive).

After your initial purchase, your Blink system won’t require any contracts or monthly fees, and comes with a 1-year limited warranty.

Given Blink’s features and fairly low price (at least compared to the competition), what’s everyone saying?

What’s Everyone Saying About the Blink Home Monitoring System?

As we mentioned above, the Blink system hadn’t been released to the general public yet, although we came across multiple reviews from customers who were part of the Kickstarter campaign.

After using theirs for over a month, ASecureCam.com provided a fairly in-depth Blink review. They liked the system’s good video quality, long battery life, lots of useful features, and that the app is simple to use.

On the other hand, they noted that the “night vision” light is very bright, which might draw unwanted attention—something you don’t want if someone has broken into your home. Also, they noted that the Sync Module must be plugged into an outlet while it acts as the hub for the entire system. So if you lose power, the system is basically useless.

Ultimately, the author claimed they’d recommend Blink to others and stated: “Blink missed the mark by requiring the Sync Module, but they nailed the price point. Finding an HD camera for under $100 is rare and the fact that the individual cameras are completely cordless is a huge advantage.”

SecurityGem.com’s Take On the Blink System

SecurityGem.com found that the Blink system was easy to install and featured high-quality video with no lag time (although you’ll only have a 90° viewing angle). Overall, they were “thoroughly impressed” with the system, although their biggest complaints were:

The nighttime video performance left something to be desired.

Their Blink cameras would intermittently fall offline, and “The only way to resolve this is by physically unplugging the Sync module and plugging it back in.” They did note that Blink’s support staff pushed an update to their system, which improved performance.

When viewing video from a remote location, it can take a second for video to load.

From an app perspective, Blink’s iOS app had an average rating of 4.5 stars on iTunes, although there were only 7 total reviews. Common compliments cited ease of use, impressive functionality, and expandability options, while most reviewers stated that they’d like to see additional features in the future.

On the other hand, Blink’s Android app had only a 2.7-star average rating on Google Play, with 27 total user reviews. Most of the negativity seemed to revolve around the app’s propensity to crash, which appeared to be especially problematic with Galaxy S6 and Moto X 2nd generation smartphones.

Alright, let’s bring it home, shall we?

Is the Blink HD Home Monitor Right For You?

We’ve reviewed a lot of home automation systems here at HighYa, and it seems like the Blink Monitoring system occupies a space uniquely its own.

It’s not quite a traditional home automation system, since you can’t actually automate anything (such as remotely adjusting your home’s temperature with Nest or Keen Home), but it’s not quite a security system either (like Angee), since—at least as of the time of this writing—no alarm devices were available. And even once they are, it doesn’t appear that the authorities will be notified if an alarm is triggered.

So, where does this leave you? If you’re a newbie to the home automation/security scene and don’t want anything too complicated until you get your feet wet, it’s difficult to think of a better entry point than Blink. After all, it’s one of the least expensive options available, and it seems to include true plug-and-play usability—not to mention some pretty great features that you probably won’t find anywhere else at this price point.

On the other hand, if you’ve been in the home automation game for a while, Blink’s limited expandability and the fact that it won’t communicate with your other devices might have you looking elsewhere.