Dutch Glow claims to be a wood restorer derived from a 100-year-old Amish formula that cleans, polishes, and nourishes for a long-lasting shine. They boast it reveals the wood’s natural beauty, works on painted surfaces, and removes waxy buildup.

Dutch Glow is brought to you by SAS Group, a direct marketing company based in New Berlin, WI. At the time of our research, the company has a D+ with the Better Business Bureau and 48 closed complaints (as of 7/6/15), most of which appeared to reference unwanted products/charges added to orders, both online and off.

Dutch Glow also goes under the moniker Amish Wood Milk, ostensibly because it was invented by Amish woodworkers and has a white color. They state its “simple” ingredients break down years of wax buildup from using other polishes, revealing the furniture’s natural glow. However, we've accumulated numerous Dutch Glow Reviews that contradict that claim (more about this shortly).

To use Dutch Glow, the company claims you’ll need to apply it to any wood surface and wipe with a cloth. They brag it’s like a magician on cabinets, making grease, smoke stains, and fingerprints disappear, and also claim that you can restore wood antiques and get rid of crayon marks left by the kids in a similar fashion. In fact, viewing the before-and-afters in their commercial, you’ll see a variety of wood products that appear to be dramatically brought back to life with a stroke of Dutch Glow. Again, numerous complaints state otherwise.

Dutch Wood Glow’s suggested use is on oak, cherry, pine, maple, or teak wood furniture, and implore you to join the generations of sportsmen who trust Dutch Glow on their wood (which appears to adorn shotgun handles and duck decoys).

Dutch Glow retails for $10 plus $7.95 S & P, although they manufacturer automatically doubles your order at checkout (and throws in a floor nozzle and microfiber cloth) “free,” but charge you an additional $7.95 processing.

In addition, there is a $2 “web surcharge fee” on all orders, bringing the total to $27.90 for 2 bottles of Dutch Glow. (By clicking “process order” you are also signing an arbitration agreement.)

Dutch Glow comes with a 30-day refund policy, so if you find that dust (or down pillows) is still building up on your furniture (or any other reason), they claim you can return it for a refund. However, you have to pay to ship it back, and the $17.90 in processing fees will not be returned.

After all the brouhaha from our readers, we at HighYa decided to try out Dutch Glow ourselves. It was purchased from Bed, Bath & Beyond for $9.99 plus tax, so luckily we didn't have to deal with the excessive shipping fees and up-selling tactics mentioned in the next section. 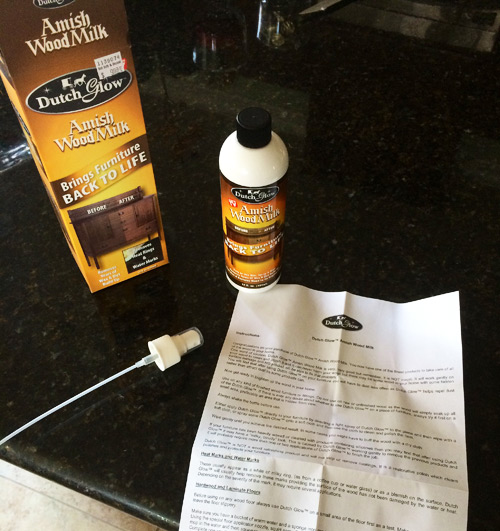 The first issue we noticed was the fact that the sprayer didn’t work, which was something another reviewer also experienced. To address this, we took the nozzle off, cut the tube shorter and screwed it back into the Dutch Glow bottle, which seemed to solve the problem.

Next, as the instructions indicated, we sprayed Dutch Glow onto a wooden table surface and kitchen cabinets, wiping with a clean dry cloth.

While thick liquid that came out of the bottle did indeed clean the table and cabinets reasonably well, we think it’s more of the elbow grease and dry cloth that did the trick. In other words, it’s our opinion that almost any other cleaning solution—including water—would do the same thing.

To prove this point, we asked an unbiased observer (OK, it was my wife) to take a look at a kitchen cabinet sprayed and cleaned with Dutch Glow and one simply wiped down with a cloth. The result? She couldn’t tell the difference.

Dutch Glow is not gooey, messy, nor oily. In fact, it did not leave any streaks, which are all pluses. Dutch Glow doesn’t seem to be as horrible a product as some of the reviewers have indicated, but is it GREAT and lives up to the HYPE? Well, not really.

And, if you want to read about some negative experiences Dutch Glow customers claim to have experienced, keep scrolling.

First of all, there are some unsupported claims by this product. There is no evidence that it is a century-old formula invented by the Amish (an old-fashioned Christian sect known for their rejection of technology and, apparently, their glowing furniture). In fact, they don’t even list its ingredients at all.

Secondly, if you were planning on going the route of ordering Dutch Glow through the website or telephone, think again. The shipping and processing fees are more expensive than the product itself, a “red flag” for us at Highya. That means, even if you do not like the product you will be in the hole for your initial fees, plus what it costs to ship back. And let’s not forget that you are also signing an arbitration agreement when you buy, preventing you from traditional legal recourse such as a trial by jury or joining a class action lawsuit.

Many of the 290+ Dutch Glow reviews here on HighYa complain of long delivery times, horrible customer service, a TON of additional up-selling during the purchasing process, telemarketers bombarding you, and stories of getting charged much more than expected tell us that it's probably better to not buy online from their website or over the phone.

If you still want to try Dutch Glow, we recommend going the route of purchasing directly from a local retailer (like we did at Bed, Bath & Beyond).

Next, as a friendly suggestion, don’t set high expectations for this product. As we mentioned, it will do some cleaning—about the same as any ordinary cleaning solution applied with a dry cloth—but it’s certainly not “magic!” If your furniture has scratches and other stains, it will be quite difficult to remove them with Dutch Glow alone, despite what the commercial promises.

Readers have given Dutch Glow an average rating of 1.5 stars, but the vast majority of them are frustrated with the customer service, extremely high shipping charges, and absurd refund policies. If Dutch Glow was being evaluated on the product alone, we would say it deserves at least 2.5 stars, if not 3.

What do you think? Agree or disagree? Let us know below!

Write a Review for Dutch Glow!