Using paint right from the can, Wagner’s indoor/outdoor FLEXiO sprayer system provides more accuracy and control with less mess, along with even coverage, simple functionality, and the ability to paint eight to 12 times faster than with a brush.

The system accomplishes this using an X-Boost Turbine for “unmatched power,” which attaches to the iSpray Nozzle for a consistent, professional finish when spraying broad surfaces such as walls, decks, and fencing. After a quick twist, you can replace this with the optional Detail Front End for an “ultra-smooth finish that is perfect for cabinets, trim, and furniture.”

Both FLEXiO nozzles can also be used for outdoor patio furniture, including tables and chairs, as well as vases.

Standing six to eight inches from the surface, simply aim and pull the trigger to spray, regardless of the size of the job, and whether you’re painting in a vertical or horizontal direction. When you’re finished, the system cleans up in five minutes using a small amount of soapy water.

These certainly sound like useful features, but is it necessarily the right model for you? Take a few minutes to read what we uncovered during our research, and we’ll help you take a more informed next step.

FLEXiO’s As Seen on TV Models

ToolNerds explains that high volume low-pressure (HVLP) paint sprayers like FLEXiO use a high volume of air “to aerosolize and propel the paint at lower air pressure. The result is a higher proportion of paint reaching the target surface with reduced overspray, materials consumption, and air pollution.”

Together, this means HVLP sprayers can reduce prep and cleanup time, while remaining more portable and compact than typical options.

They balance these potential advantages, though, by noting that the lower pressure used by HVLP sprayers means that application is slower than traditional sprayers, making them less than ideal for painting larger surfaces.

Wagner’s As Seen on TV offer is currently available for three different models in the FLEXiO series (although there are a total of 10): 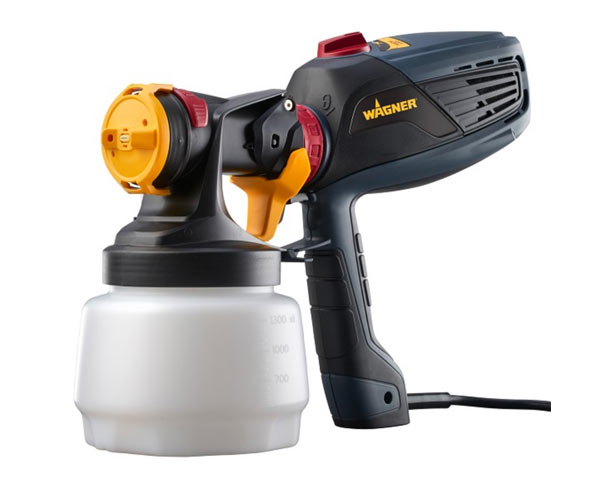 The 2000 is Wagner’s base model in the FLEXiO series. Credit: Wagner SprayTech Corporation

This model features two speeds (one for thick materials, another for thin) that can be adjusted using the X-Boost Power Dial, as well as the FLEXiO system’s unique iSpray Nozzle with adjustable control and the Lock-n-Go split gun design for quick five-minute cleaning.

Adding 1.5 quarts of paint to its canister will cover a 10’ x 12’ in two to six minutes (depending on whether you’re using stain or latex paint), with just one fill.

Together, Wagner advertises that the FLEXiO 2000 is best used on large fencing/decking, interior rooms, and exterior siding, using interior or exterior latex, or solid stain. 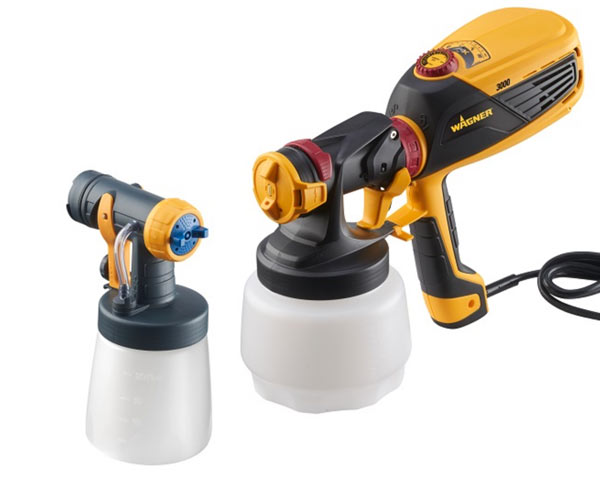 Comparatively, the 3000 model comes with all of the same features as the 2000, in addition to nine numbered settings with material adjustments, two different nozzles (one for walls, fences, and siding and the other for fine detail finishing on cabinets and trim), the ability to paint walls 10 times faster than a brush, and a sturdy carrying case for easy storage.

Using stains, you’ll be able to cover an 8’ x 10’ surface in one minute, or in five minutes using latex paint.

Wagner indicates the FLEXiO 3000 is best used for furniture, small or large fencing and decking, cabinetry and trim, interior rooms or exterior siding. It's optimal for exterior and interior latex, wood sealers, chalk/milk paints, lacquers and urethanes, and solid stains. 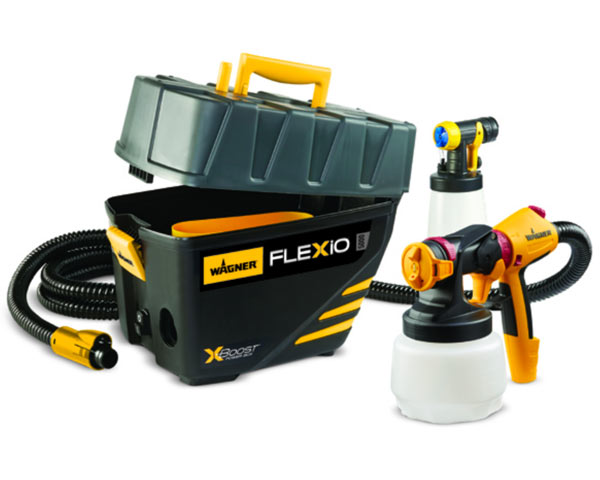 FLEXiO’s 5000 model is at the top of the lineup, with a floor-based motor housed in a hard-shell case, which doubles as a storage container. Credit: Wagner SprayTech Corporation

At the top of the series is FLEXiO’s 5000 model, which is a stationary version whose motor is housed in a case on the ground. This means you’ll have less weight in your hand during the application process, as well as handle-mounted controls with variable speeds that deliver precise adjustments for various coatings and projects.

It comes with all of the same features and components as the 3000, in addition to an 11.5’ air hose and an integrated case for storing the air hose, nozzles, and cups. It’s claimed to paint a wall 12 times faster than a brush.

How Much Does the FLEXiO Paint Sprayer Cost & Where Can You Buy?

The As Seen on TV offer is available for three different FLEXiO models (again, there are a total of 10 models in the series):

Each package comes with free S&H (one to three days), as well as a $20 rebate on high-quality paints from companies like PPG, Glidden, and Pittsburgh.

Note: We found several other models in the FLEXiO lineup available at retailers like Amazon, Home Depot, Lowes, Walmart, Menards, Ace Hardware, Target, and QVC, although none offered the 2000, 3000, or 5000 versions.

All direct orders come with a 30-day money back guarantee, less S&H, although the device must be new and unused. In other words, as soon as you test FLEXiO, you own it.

What Can We Learn from FLEXiO Reviews?

We encountered dozens of customer reviews on the Wagner website between FLEXiO’s 2000, 3000, and 5000 models, who had given them an overall average rating of about 4.8 stars. Common compliments related to ease of use and cleanup, reduced time compared to a brush or roller, and prompt customer support.

Outside of these, we encountered hundreds of online customer reviews for FLEXiO’s 590 paint sprayer across sites like Amazon, Home Depot, and Walmart, but none for the 2000, 3000, or 5000 versions.

From a company perspective, Wagner SprayTech Corporation is based out of Plymouth, MN and has been in business since 1970. They held an A+ rating with the Better Business Bureau, based on no customer reviews or complaints, as of 4/24/18.

While HVLP models come with many advantages, they’re also typically among the most expensive type of paint sprayer. With this said, you’ll find them available in just about every imaginable size, shape, and design, priced anywhere from under $100 to well over $1,500.

Comparing corded residential models like FLEXiO, here were some of the most popular results on marketplaces like Amazon and Google Shopping at the time of our research, as well as at retailers like Home Depot and Lowes:

If you’ve already decided that an HVLP model is ideal for your needs and preferences, how can you choose between the above, as well as the dozens of third-party models available locally and online? As with most consumer purchases, it could largely come down to the number of features you get for the money—otherwise known as overall value.

For example, while the FLEXiO, PaintWhiz, and Chicago Electric versions were some of the most expensive options in the table above, they also didn’t require paint mixing, which could save you a ton of time and hassle.

However, PaintWhiz only advertised painting times that were four times faster than using a brush or roller, whereas the FLEXiO 5000 advertises 12 times faster. The FLEXiO versions were also the only ones with the Lock-n-Go split gun design, so while they were among the highest priced, they could end up offering the greatest level of value (if saving time and avoiding hassle are important to you, of course).

Our Final Thoughts About FLEXiO

No matter where we looked at our research, Wagner’s HVLP paint sprayer systems (whether in the FLEXiO lineup or otherwise) were consistently at the top of the list among customers and retailers alike. So, while they might be at the upper end of the spectrum from a price perspective compared to popular competitors, it seems most report that they deliver meaningful value for the money.

Just keep in mind that while Wagner stands behind the FLEXiO 2000, 3000, and 5000 models with a 30-day refund policy, this only applies to new items. So, if you test it out to see if it meets your needs, you’ll immediately lose the ability to process a refund.

And when you also factor in that you’ll have to pay return S&H charges if you’re dissatisfied, it’s important to emphasize that this isn’t a completely risk-free transaction.

» See Also: How to Find a Reliable Home Contractor

Write a Review for FLEXiO!