What Is FLX Electric Bike?

This way, their website claims that FLX (pronounced flux) works exactly like a normal bike, except you’ll be able to climb hills easier and reach top speed faster. And once you engage the throttle, you could reach speeds up to 46 mph on full power.

Combined with what they call an elegant but battle-tested design that can take a beating, FLX’s electric bikes promise not just to perform, but also to look good while doing it.

Considering their competitive price, you’re here because you want to know if the FLX Electric Bike will deliver a better value than other brands. Is it really the “best eBike,” as referenced on their Indiegogo campaign?

Though FLX could certainly help put the fun back into cycling and get more happy riders onto bicycles, are there any important factors to consider before jumping into the e-bike arena?

We all come from different backgrounds, so in order to make sure we’re on the same page, let’s briefly cover some basics.

Here, we’ll quickly go over the basic concept of e-bikes, as well as some general points you might not have considered.

As the name implies, e-bikes involve an electric component that’s intended to help make pedaling easier. Because of this, as outlined by NYCEWheels.com, they typically feature three more parts than a traditional bicycle:

While electric bikes like FLX might sound a lot like an electric scooter, or even an electric motorcycle, the biggest distinction is that the latter are intended to provide full motoring power, while e-bikes are mostly intended to help make pedaling easier.

Before moving on, it’s also important to note that the addition of an electric motor to bikes like FLX can change their vehicle classification, depending on where you live. Bicycling Magazine gives but a couple of examples:

“According to Portland State University’s TREC Transportation Insight for Vibrant communities, as of December 2015, at least 40 US states and Canadian provinces had a minimum operator age for e-bikes, typically 14 or 16 years of age. In Alberta, 12 year olds can operate an e-bike, but in Quebec, you must be 18.”

Depending on your intended use, this means it’s probably a good idea to check your local laws before spending thousands on an e-bike.

Now, let’s take a look at FLX’s specific features, as well as the differences between each model.

Which E-Bike Models Does FLX Offer?

Overall, there are three models in the FLX Electric Bike lineup. As it turns out, though, they have far more features in common than not, so let’s start there.

What Are FLX Bike’s Standard Features?

The FLX Bike’s control setup looks a lot like a standard bike, including two brake levers and a shift lever for the rear derailleur.

The major differences are the inclusion of a throttle near the left grip, a central LCD display, along with a manual selector to navigate your different options. 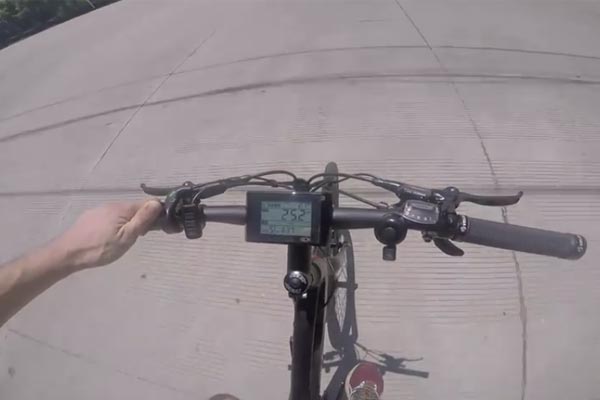 This selector is where you’ll be able to choose between five different pedal assist modes; Economy (power level 1, or basic assistance) can get you between 70 and 100 miles per charge, while speed mode (maximum assistance) will get you between 25 and 50 miles.

According to their speed test video, you can remove the speed regulator on your FLX for use on a private road, or off-road.

Their website also tells us that all FLX Bikes use high-quality components that can be ordered online or picked up at any local bike shop, including Shimano Alivio 9-speed cassettes, hydraulic disc brakes, adjustable saddles, and quick release wheels.

From a fit perspective, while the site indicates FLX Bikes can fit riders between 5'2" and 6'5", will likely be most comfortable for those between between 5'4" and 6'2". 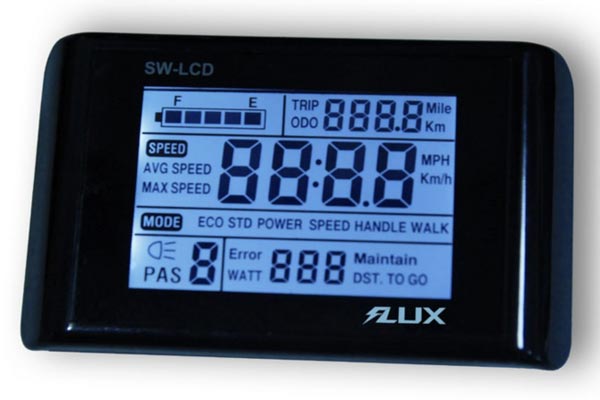 What About FLX Bike’s Battery & Motor?

FLX Bike’s 13Ah and 17Ah lithium-ion batteries are powered by the same Panasonic cells used in the Tesla Model S, so we’re told they’ll retain 90% of their initial capacity after 400 cycles. All electronic components are sealed so that they can get wet.

When the time comes, the included 3A charger will fully recharge the 13Ah battery in fives hours and the 17Ah battery in six hours.

If you need to secure your bike in public (such as commuting), the battery features a built-in key lock, or it can be removed and taken with you. When removed, it also features a USB port that can help charge your other devices.

The battery powers a maintenance free (650W peak, 250W normal) Bofeili brushless mid motor that's mounted between the pedals (compared to a hub-based motor), which they claim can be removed and replaced by unscrewing a couple of bolts.

Now, let’s take a look at how these features are implemented into each FLEX Electric Bike model.

Compared to the other models, the FLX Roadster promises to provide the best combination of economy and speed. 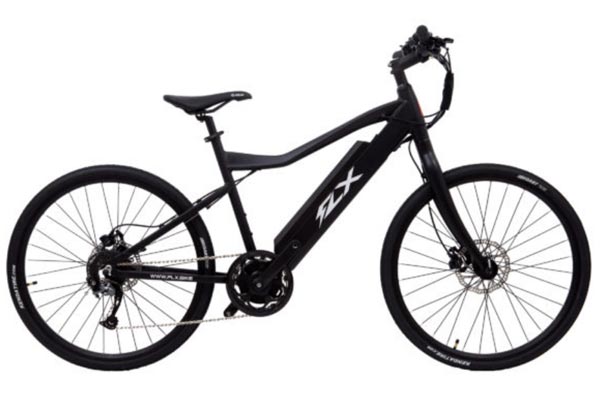 The Roadster is FLX’s least expensive electric bike model and is intended for paved and other hard-packed surfaces. Image credit: FLX Electric Bike

Claimed weight with battery is 51 pounds. 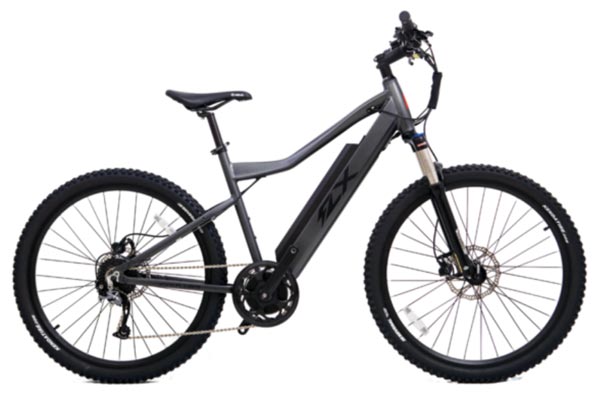 Adding short-travel front suspension and wider tires with more aggressive tread, the Trail model is intended to help you get off the pavement. Image credit: FLX Electric Bike 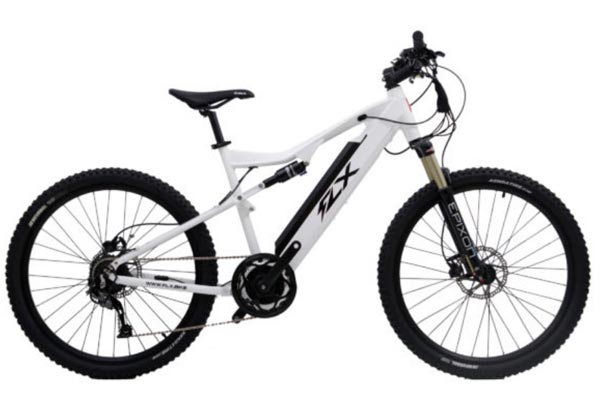 What will you pay for each of these models?

How Much Does the FLX Electric Bike Cost?

FLX Bikes are available in Gloss White, Gun Metal Gray, and Matte Black, with 13A or 17A motors. When checking out, you can choose between “Made to Order” (made just for you w/8-12 week delivery window) or “In Stock” (ships from a local warehouse within 2-5 days):

Additional accessories—everything from smartphone mounts to extra batteries—can also be purchased for anywhere between $10 and $650.

All bikes come with free S&H and a 1-year warranty. If one of your electronics malfunctions, the website indicates they’ll ship any required replacement parts, which you can take to your local bike shop (they’ll also pay for any repair costs covered under warranty).

In order to request a refund or process a warranty claim, the customer service department can be reached at (415) 621-9121. We also emailed hello@flx.bike to inquire about refund details, and will update as soon as a response is received.

Considering these prices can be thousands less than many competing e-bikes, are customers reporting a solid value with FLX?

What Can We Learn From FLX Electric Bike Reviews?

The FLX Bike got its start in a May 2016 Indiegogo campaign, where the fledgling product raked in more than $1.7 million.

While ElectricBikeReview.com got their hands on a pre-release version of the Trail model, it only featured pedal assist (no throttle override) and a gen two motor (new ones have gen three motors). Overall, they felt the motor was smooth and relatively quiet, although they noticed a little bit of a delay.

They also like that the brakes featured motor inhibitors, which work to kill the motor when you pull the brakes, so you don't inadvertently keep going.

If you don’t have time to watch the whole thing, here are his highlights:

Nick liked that FLX’s pedal assist was easy to use and very functional. He found the display was easy to change between settings and gave good readouts, while the grips worked well and felt solid.

Finally, he appreciated the fact that many useful accessories were available.

On the other hand, Nick really seemed to dislike his FLX Bike’s throttle (even going so far as to call it “garbage”), since he felt like it took way too long to activate and just wasn’t functional.

Specifically, he felt the only way it might be useful is if you needed to take a brief break on a long ride.

Other aspects that disappointed Nick were the limited battery power using pedal assist (without the throttle), which he found only lasted about 46 miles, as well as some questionable quality products like seat and tire tubes.

In the end, he thought that the FLX Bike might work best for someone looking to step up to a new electric bike, as well as those with injuries or physical limitations. However, he didn’t recommend it for commuters traveling 6-10 miles (or more) one way.

The popularity of the FLX Bike has already spawned at least one Facebook group, as well as several Meetup groups around the country.

Who Founded the Company Behind FLX Electric Bikes?

FLX Bike was co-founded in 2014 by Pete Leaviss and Rob Rast, who claim they’re “on a mission to get people out of cars and back onto bikes.”

Before launching the company, Pete worked as a mechanical engineer, while Rob worked as a Business Development Manager for QT Technologies and as founder and CEO of California Rast Trading Company.

FLX vs. Other Electric Bicycles: Which One’s For You?

The reality is that electric bikes are all the rage nowadays.

Searching online, you’ll quickly be met with a dizzying array of design options ranging anywhere between a few hundred bucks to well over $8,000. Some of these come from household name manufacturers, while many are sourced from companies you’ve probably never heard of.

Comparing the individual specs for each of these lines’ most affordable models, the closest two options to FLX’s Roadster appear to be Haibike’s XDuro Urban Plus ($3,599) and IZIP’s E3 Diamond Dash ($2,599).

The biggest differences are that Haibike’s option also comes with the COBI smart connected biking system (including headlight), as well as thru-axles instead of quick release axles (which can provide improved stiffness and steering feel), but also weighs 56 pounds. The Diamond Dash only has a 16-35 mi range.

Where does all of this information leave you?

Bbased on what I learned during my research, as well as my nearly two decades’ experience cycling everything from fixed gear bikes to mountain-tamers, I can say that FLX has jammed a whole lot of features into a very reasonably priced package.

In fact, dollar-for-dollar, you might be hard pressed to currently find a quality electric bike with this many features, at this low of a price. As you can see, similarly equipped models from popular competitors might cost you twice the price.

Does this mean the FLX lineup will be perfect for all riders? If you’re used to ultra high-end biking gear, then based on what I read in their specification sheets, some of their components might leave you wanting.

But for the vast majority of riders—especially those looking for a quality e-bike without paying an arm and a leg—FLX’s electric bikes could just fit the bill.

Also, based on some of the company’s recent firmware and component upgrades, it seems like they’re listening to customers and trying to provide the best cycling experience possible.