What Is Fret Zealot?

Promising to be a way to play guitar in just 60 seconds, Fret Zealot is an interactive full-spectrum LED learning and display system. The product mounts to any standard-length guitar, and we’re told that installation is a simple and intuitive process.

The device comes with its own companion mobile app, which the creators claim is designed with both the seasoned professional and the complete guitar novice in mind. In fact, the entire Fret Zealot platform is designed from the ground up to be applicable to any guitarist, regardless of experience level.

The Fret Zealot first went live on popular crowdfunding platform Kickstarter in January of 2017, going on to raise $248,826 in pledges, 518 percent of their original $48,000 goal. After this initial campaign, the product had a second round of funding on Indiegogo, where it amassed another $352,643 from backers.

Based on these impressive numbers, it’s clear that people are excited about the premise of the Fret Zealot, but is it right for you? Let’s find out.

Fret Zealot uses a non-damaging adhesive to install onto the neck of your guitar. You’ll need to de-string it in order to apply, so this may be a good opportunity to change out your strings if you haven’t in a while.

The company offers an instructional video that walks you through lining up the LED strips with your fretboard, which looks like a relatively straightforward process that shouldn’t take any longer than about 15 to 20 minutes for most users.

Once the Fret Zealot is installed, you’ll just need to attach the USB-rechargeable battery (which lasts up to eight hours per charge) and pair it with the app to start playing. This is where the real fun begins. 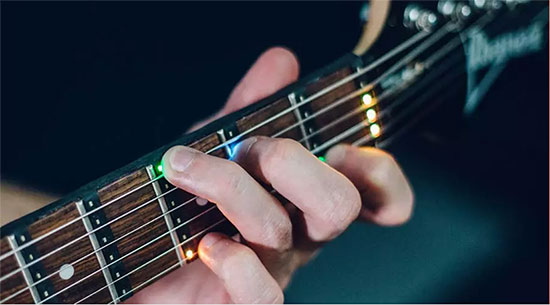 The Fret Zealot can display just about any chord shape and scale known to man, as well as individual notes all over the fretboard’s first 15 frets (more on this in a moment).

According to the creators, the device only goes upas well as two this high due to manufacturing and cost constraints, but they also claim that 99 percent of your playing will happen in the range covered by the device. Based on our experience playing the guitar without the Fret Zealot attached, we tend to agree.

During the conception phase, the makers state that they were focused on creating a product thin enough to have a negligible impact on your personal playing style. Although we haven’t tested the Fret Zealot, we’re told that the LED strips are only half the height of the frets themselves, making it clear that your playing won’t be impacted by them.

In order to truly understand what all can be done with the Fret Zealot, we need to take a closer exploratory look at its companion application. From there, we’ll break down its pricing and availability, as well as look into any potential competitors.

The Fret Zealot is closely tied with its companion mobile app, which is due to be released on Android and Apple iOS when the product begins shipping (more in the Pricing section). Upon opening the app and syncing it via Bluetooth with the Fret Zealot on your guitar, you’ll be presented with three main sections to choose from: Play, Learn, and Fun. 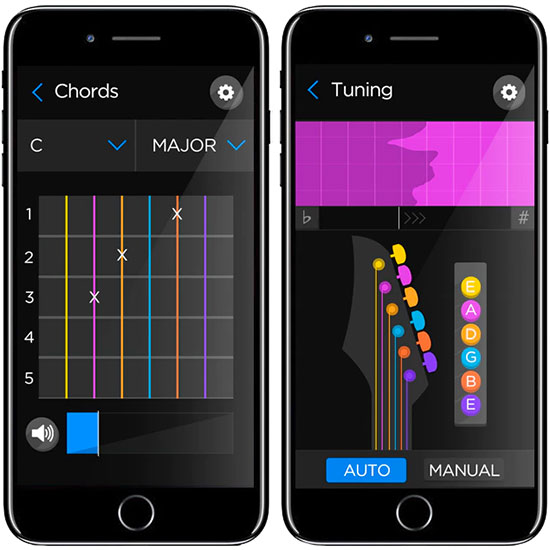 The Fret Zealot companion app looks to induce a dizzying array of features for users when it launches. Image credit: Edge Tech Labs

In Play, you’ll have access to a growing library of songs that can be displayed across the first 15 frets of your guitar using standard MIDI tablature. If the LED’s are not connected, you can still use the app to look up chords or song parts quickly for reference, as it will display them in standard tab formatting.

The developers have made it clear that they plan to add support for popular services like Tab Pro, allowing you to learn and play just about any popular (or even marginally popular) song you can think of using the Fret Zealot.

It’s even mentioned that the app will feature a mode where it will listen as you play, automatically showing you the next note or chord as you strum and pick along to your favorite tracks. Songs can be slowed down, looped, and otherwise adjusted as you learn and master them.

Taking a Look at ‘Learn’

In Learn, you’ll be able to load up and display just about anything you can imagine from a technical standpoint. All major and minor chords are already included in the beta version of the app, and we’re told that support will be added for diminished and augmented chords, as well as alternative voicings and shapes, at launch or shortly after.

A noteworthy feature the software will allow for is the use of a capo or custom tunings in conjunction with the Fret Zealot; simply tell the app how you are playing, and it will adjust what it shows you on the fretboard accordingly, thus expanding your creative options substantially.

Of course, you’ll have less total surface area available when using a capo, but there’s still plenty of room to play the vast majority of songs when used on the first 6 or so frets. This is especially relevant for more advanced players.

In the notes and scales section, you’ll be able to see countless variations of (you guessed it) notes and scales, allowing you to choose your root note, how many octaves you’d like displayed, and what type of scale (pentatonic, blues, natural minor, etc.).

Shortly after launch, the company plans to add support for custom lessons using the app interface, though no additional information was available on this aspect as of our research.

Finally, in the Fun section of the app, the Fret Zealot’s more aesthetically-driven features can be found. The light show function will allow you to choose from a number of mesmerizing patterns to be displayed across the entire LED grid on your guitar, with the company planning to add custom light programming in a post-launch update.

The product is being developed by Edge Tech Labs, a three-time creator on Kickstarter with a successful track record of delivering both their previous products (DrinkMate and VineTracks) to market. The company is currently accepting open investment for future projects, and updates on their Kickstarter page for Fret Zealot seem to indicate that they have several long-term plans for the product as an open-source platform for educators.

As of this writing, Fret Zealot was available for pre-order through the product’s main website. It currently is priced at $199.99 + $6.99 for shipping. They list that the product is on track to be shipped sometime in November 2017. The company’s latest Kickstarter update published on October 31st lists that final production quality checks are being carried out, and that they should be shipping out imminently.

We’ve reached out to the company for clarification, and we’ll be sure to update this article when we hear back.

One of the risks you take when purchasing a crowdfunded product is that it will arrive later than expected. Seeing as the initial delivery window was estimated to be October 2017, that seems to be the case here with the Fret Zealot, but we’re willing to give the company the benefit of the doubt based on the strength of their October 31st update.

Fret Zealot seems like a visually innovative way to master your favorite songs, but are there any products out there today that claim to deliver a similar functionality?

We were able to find a few products like the Fretlight, which were actually LED inlays pre-installed on branded guitars, but as it turns out, a few different companies are making removable options, including one that was developed nearly in unison with the Fret Zealot on the crowdfunding circuit.

This product, called FretX, differs in that it only attaches to the first four frets on your guitar. It features a similar mobile app, but obviously, it is not able to display full scales and various octaves for notes.

In addition to these differences, the FretX LED’s are not full-spectrum like those on the Fret Zealot, meaning they are only capable of displaying red and blue colors. All of this said, the device only costs $49, a fourth of what the product at hand will run you.

In our view, deciding what product is right for you will largely come down to your budget, as well as the scope of your guitar-playing ambitions.

For instance, if you’re really only searching for an introductory product (at an introductory price tag) to help you learn songs to play with a few friends, something like the FretX may be ideal. It’s cheaper than the Fret Zealot by a wide margin, and will allow you to master the chords used in thousands of popular songs over the first four frets on your guitar.

However, if you are serious about learning the intricacies of the instrument–-scales, advanced chord voicings, custom tunings, lead guitar, etc.–-Fret Zealot clearly has more to offer, allowing you to expand your playing over the majority of the guitar, while also showing you full scales and octave ranges in the process.

The Bottom Line: Is Fret Zealot the Right Learning Tool for You?

Based on everything we’ve learned about the Fret Zealot, will it truly live up to its promise of helping you play guitar in just 60 seconds? Here’s what we think.

From a purely technical standpoint, Fret Zealot appears to be an innovative and intuitive way to learn more about the art of playing guitar. If the device is able to live up to all of its promises, it will likely prove to be an invaluable tool for those of us who are visually-oriented learners in particular, eliminating the barrier between the countless books, tabs and other training materials and your actual application of them in your playing.

On the other hand, we can anticipate a few potential downsides to learning songs, scales and chords in this way. For some users, we could conceivably see the Fret Zealot acting as a musical crutch of sorts, preventing you from truly mastering the techniques and theory in a way that’s applicable when playing an instrument that isn’t equipped with all of those LED’s.

Despite this concern, we do feel that there is immense value to be had here even for intermediate and advanced guitar players, which is something that we can’t say with as much confidence about a more abbreviated device like FretX.

From a songwriting and composition perspective, having the ability to display custom scales, tunings, and notes almost anywhere on the fretboard opens up unique creative opportunities, and being able to put on dazzling light shows when performing is an extra layer added to the “cool factor” here.

All told, we’re very excited to see what the future holds for the team behind the Fret Zealot. Once the device starts shipping and getting into the hands of backers, we’re looking forward to reading more first-hand accounts of how it works in practice.

Just get your Fret Zealot in the mail? Once you’ve had a chance to play around with it for a bit, be sure and leave a review below to share your thoughts with other Highya readers!

Write a Review for Fret Zealot!