Kuna’s proprietary technology powers a line of outdoor home HD security cameras and smart lights that can help you prevent break-ins and can be controlled anywhere from your phone.

Whether it’s your front door, back door, or side entrance, Kuna provides a live video feed that helps you keep an eye on your house, your pets, and your vacation home or small business, and can even alert you when family comes home—regardless if it’s day or night.

Once an activity is detected, Kuna will send advanced alerts that allow you to decide how to respond, whether it's playing a pre-recorded message, speaking with the visitor, sounding an alarm, or calling the police. All video recordings are stored in a secure cloud for later viewing.

You want peace of mind, but you also want to make sure you’re getting the most value from all your purchases. From this perspective, does Kuna offer everything you need, or should you consider the competition?

Let’s start off by taking a look at Kuna’s lineup.

Which Products Does Kuna’s Technology Power?

In order to view the video transmitted by your Kuna product, you’ll need to connect to a Wi-Fi signal. This then feeds the information to your device.

Kuna’s smart lighting products also integrate with Alexa, although as of this writing, the only skill you could create was turning all connected lights on or off at the same time.

With these similarities in mind, let’s take a look at some of the meaningful differences between Kuna’s products.

Instead of a standalone unit, Kuna’s Toucan Surveillance Kit pairs a smart socket USB adapter with a USB powered HD camera that retrofits into your existing outdoor light. The website claims the process works over three steps:

Pro tip: Keep in mind that Toucan’s smart socket appears to add about two inches to the overall length of the light bulb, so you might want to make sure that your existing light can accommodate this extra length. 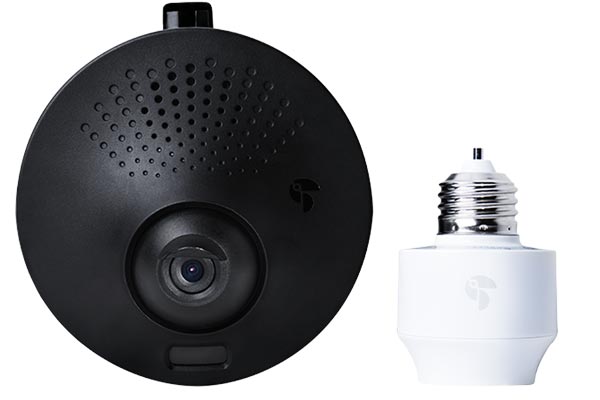 Instead of a retrofit device, Kuna’s Maximus Security Light features a smart Wi-Fi camera built into an elegant outdoor light fixture. The company’s website tells us you just have to replace your old light fixture and use the existing wires, making it ideal for the front door, back door, and garage areas.

In order to match different decors, Maximus is available in Craftsman, Traditional, Contemporary, and Coach designs. 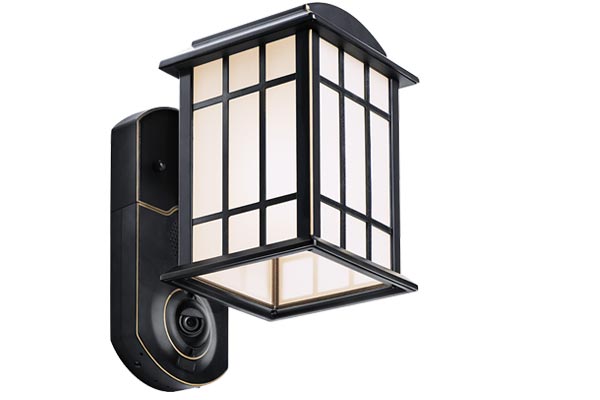 In a nutshell, Kuna’s Companion lights are designed to look exactly like their Maximus brethren, but without the functionality of a camera or two-way intercom. They sync with Maximus via Bluetooth and turn on and off at the same time. 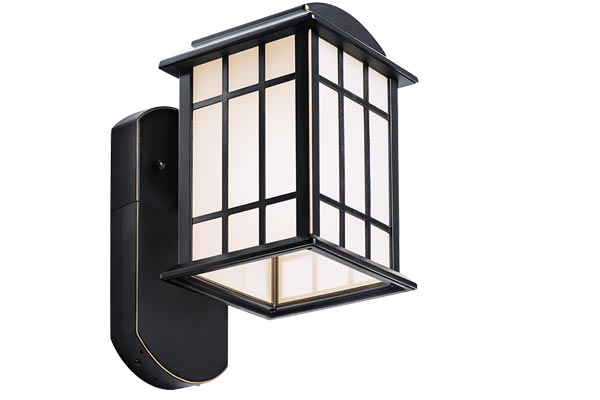 As you can see, Kuna’s Companion lights are designed to match their Maximus lights, without a camera or intercom. Image credit: Kuna Systems

How Does Kuna’s App Work?

Kuna’s app is where all the heavy lifting is done, including receiving notifications, viewing the live HD video feed, play an automatic greeting, speak to the person at the door, call 911, blast the siren, and interact with Alexa.

Inside the app, you can also download and share videos, adjust the motion detection sensitivity, change light settings, and turn off notifications.

In order to use Kuna, you’ll need to own an iOS device running iOS7 and above (iPhone 4S and above and iPads enabled with Bluetooth 4 capability), or an Android device supporting Bluetooth LE: 4.3 (Jelly Bean) and above. 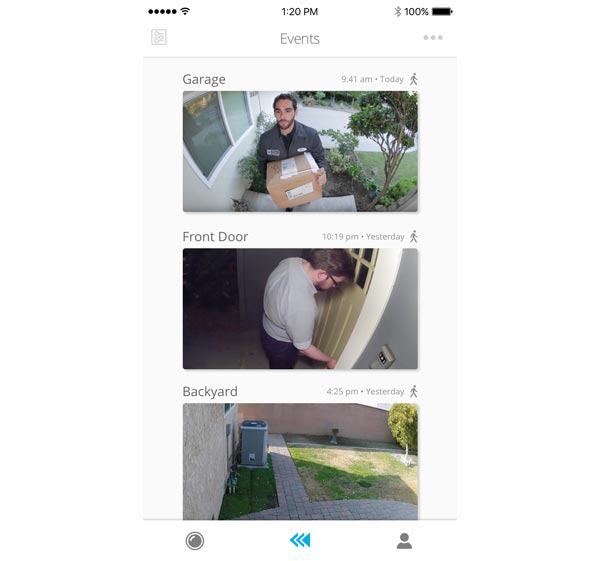 How much will this technology cost you?

How Much Do Kuna Smart Security Devices Cost?

Kuna’s devices, which are currently only supported in the US and Canada, are priced as follows, including free shipping:

Kuna’s lights can also be purchased online and locally at retailers like Amazon.com, Home Depot, Lowe’s, Best Buy, and Walmart (in some instances, for less).

It’s important to point out that, if you’re looking to download more than three videos per month, or to review, rewind, and download for up to 30 days (versus two hours), you’ll have to sign up for Kuna’s Premium Plan at $4.99-29.99/mo, depending on the number of devices and whether you choose to pay monthly or annually.

With the Premium Plan, you’ll also gain access to lifetime theft protection, priority support, and 5%-15% discounts off future device purchases. There are no contracts or hidden fees, and you can cancel at any time.

All Kuna-powered products come with a 60-day money back guarantee, less S&H charges, along with a one-year warranty against defects in materials and workmanship when used normally.

On Amazon, Kuna’s Maximus light had well over 600 customer reviews and an average rating of four stars at the time of our research. There, most compliments related to ease of installation, quality audio and video, the lack of batteries and cords, and its intuitive app.

Several common complaints referenced less-than-stellar nighttime picture (usually related to excessive glare), along with a delay seeing who’s there (often accompanied by a black picture lasting for several seconds) when going to live mode in the app. More than one also complained about the $60/year cloud fee for improved functionality.

On both iTunes and Google Play, Kuna Smart Home Security’s app had an average rating of three stars. Many claimed to have experienced ease of use and solid functionality, while others reported laggy video, delayed notifications, and bugginess.

As a company, Kuna Systems, based out of San Bruno, CA, was co-founded in 2012 by CEO Sai-Wai Fu and CTO Haomiao Huang.

Most of these popular media outlets reported that the Kuna Security Light looked nice, was easy to install and use, delivered sharp HD video and motion-activated recording, clear two-way audio, and an intuitive app.

In short, many recommended it if you’re looking for a no-hassle way to keep a closer eye on unexpected visitors.

On the other hand, common complaints were the lack of dedicated night vision that didn’t always capture low-light conditions well. Similarly, A Secure Cam noted that Kuna’s lack of WDR (Wide Dynamic Range) means that some users might lose picture quality if their porch is shaded while their walkway is sunny.

Pro tip: Remember the glare we just talked about? According to Tech Hive, “the company recommends using either a LED or a CFL bulb with a maximum brightness of 800 lumens to eliminate glare on the camera lens.”

Another concern was the ongoing cost of cloud storage, especially if you own multiple Kuna cameras, along with the fact that it doesn’t feature an IFTTT channel to work with other smart home products.

Speaking of which, are there any other products competing in the same space as Kuna?

When it comes to easy-to-install, motion-activated entry cameras, there’s probably no more popular current option than Ring Doorbell. As a result, Kuna often gets lumped into the same category—but the reality is that there are some meaningful differences.

First, the similarities: Both Kuna and Ring offer 720p HD cameras with motion detection, weather-resistant construction, and cloud video access; send push notifications, and are priced between $179 and $199.

However, Kuna also offers on-demand video, a siren, and the ability to play a pre-recorded message or chime as soon as someone is detected.

Ring can detect motion up to 30 feet away (with editable zones), features an 180-degree view (versus Kuna's 116 degrees), and connects to Phones and iPads, Android phones and tablets, and any Windows 10 computer (compared to Kuna’s iOS and Android-only capabilities).

Outside of these, you won’t find any other comparable devices that feature motion-activated recording, HD video, two-way communication, and cloud storage.

With this said, there are some close competitors like the Skybell Video Doorbell (video only), Nest Outdoor Cam (more involved installation w/exposed wiring), as well as Vivint (requires additional hardware and a contract).

We’ve certainly covered a lot of territory, so let’s wrap everything up.

What’s the Bottom Line About Kuna?

Not too long ago, if you wanted a basic front door camera with motion-activation and two-way audio, it might’ve cost you thousands of dollars and dozens of hours in labor. Today, however, an increasing number of all-in-one, set-it-and-forget-it home automation solutions are entering the market.

Products like these have made it easier than ever for even the least tech-savvy among us to enjoy all the benefits that home automation can offer. And they largely seem to do it very well.

Based on customer feedback for these plug-and-play devices—Kuna included—though, it seems like you might trade a lot of customization for these systems. As a result, they might not be ideal if you’re an advanced home automation enthusiast who’s used to testing the limits of their electronics.

Just keep in mind that the performance of systems like Kuna is almost wholly depending on your Wi-Fi connection, which might not always be strongest by your front door. If this is the case, you might need to invest in a signal booster.

Write a Review for Kuna!