Do you hate cleaning your cat’s litter box? Luuup attempts to make completing the daily chore a little easier, cleaner, and less wasteful with its three sifting tray system—eliminating the need for a scooper and extra plastic baggies.

Made available thanks to the wonders of crowdfunding on Indiegogo, Luuup has inspired an impressive following as the most funded pet product ever. The litter box system has already raised over $2,000,000 from 16,000+ backers, helping Luuup to reach 2357% of its original goals.

Perhaps Luuup’s crowdfunding success can be partially attributed to the fact that it’s not this product’s first time around. Cofounder Dini Petty originally backed the idea of a multi-tray sifting litter box back in the 90’s and saw some As Seen On TV success. However, buzz, and sales, eventually died down.

Dini Petty, a former self-piloting traffic reporter and Canadian daytime talk show host, has enjoyed a lifetime of celebrity throughout several career changes. After retiring from the spotlight, Petty felt the concept of a sifting litter box was worth another go.

She enlisted the help of her son, and the two went back to the drawing board to redesign this new-and-improved Luuup, implementing suggestions from shoppers who’d purchased the original.

The result, they claim, is the smartest, cleanest litter box you’ll ever buy. Can that be the case?

Here’s The Scoop on How Luuup Works

Luuup employs three identical sifting trays that neatly nest within each other. When you’re ready to clean the litter box, you grab the top tray and give it a gentle shake to allow the unused litter to sieve through. According to the product information, only the clumps remain—eliminating the need for a separate scooper. 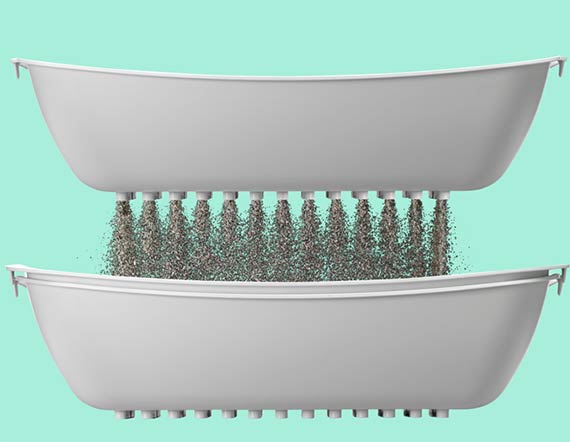 The tray in your hand can now be emptied into the garbage or rinsed off first, if you’re so inclined. The product’s description mentions that, due to the curved corners of the design, litter will not clump and cling to the base of the tray—meaning that using Luuup should be as convenient as sift, dump, and stack. 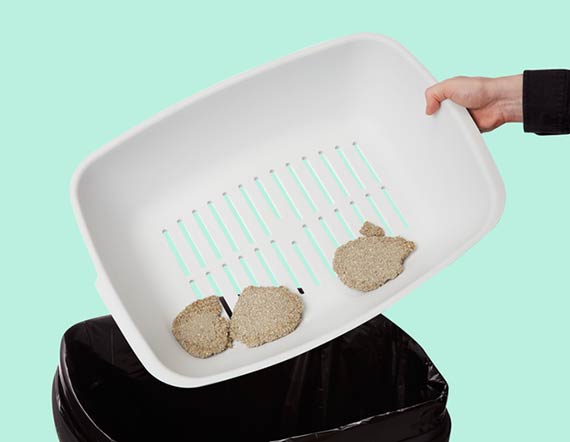 The ability to dump litter clumps directly into the garbage also means no extra plastic baggies for kitty waste—much less struggling with the occasional fallout from an undetected hole. 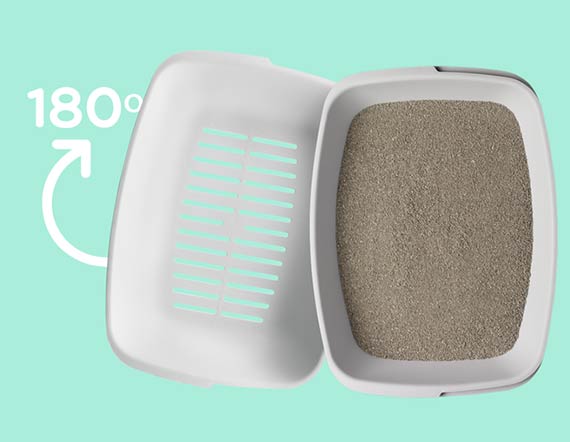 Once you’ve tossed the clumps away, simply turn the tray 180 degrees and put it at the bottom of the stack. 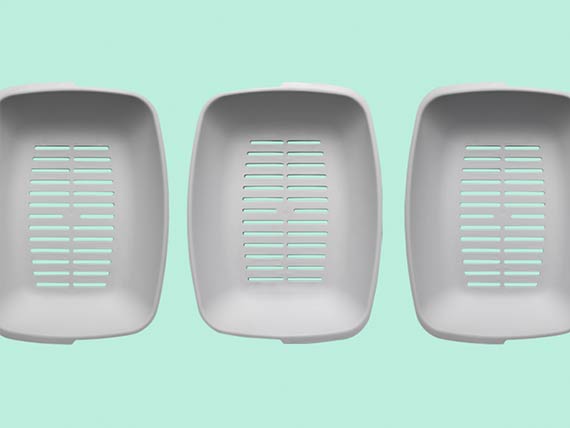 Luuup’s trays are designed as such that, when laid side by side, the identical slots will line up. To make sure you never end up with slippers full of litter, Luuup employs three tabs to indicate which direction the newest tray should be facing when nesting on the bottom.

And that nifty “looping” cycle of nesting trays is how you use Luuup—as well as inspiring the product’s name.

One issue with the Luuup’s predecessor was that it was just too small for bigger cats. This new version offers larger dimensions, measuring 15.4" in width and 20.2" in length.

To help potential shoppers better understand how Luuup helps accommodate bigger cats, the company shared the above demo video that was made by one of their beta testers. The video description explains that they weren’t just testing whether or not big cats could comfortably use Luuup, but whether or not the system would remain easy to clean when minimal litter was left unsifted for several days.

Because Luuup’s trays come in direct contact with waste before being cycled to the bottom of the stack, we’ve mentioned before that you may want to give each tray a rinse before returning it to the bottom. As with other litter boxes, you’ll also want to completely replace the litter every two to three weeks, taking the opportunity to disinfect the trays when you do. 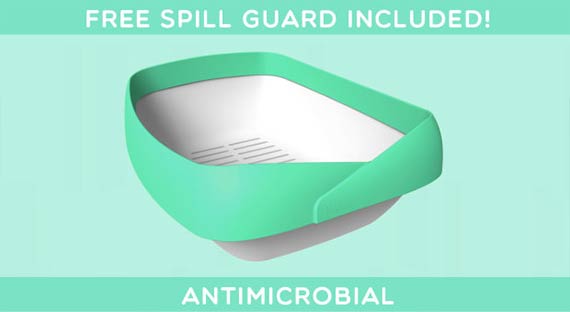 Additionally, Luuup comes with an anti-microbial spill guard to help contain the fallout from vigorous kicking. The spill guard can also be removed to reveal a lower profile of 5.2" that makes entry easier for older cats who can’t quite hop over a tall lip.

What kind of litter to use with Luuup? The product’s team suggests that premium brands seem to perform best in terms of clumping power along with low dust. They also advise that users should be gentle while sifting, to prevent clump breakage.

Like many crowd-funded inventions, Luuup isn’t quite ready to ship yet. The good news is that, despite having already exceeded its funding goals, you can still support Luuup through Indiegogo up until the projected shipment date. Depending on how much you choose to pledge, there are different “perks” available:

Your Luuup purchase comes with an anti-microbial spill guard for each litter box system. What’s not included? Each order is also subjected to shipping costs, which vary depending on your location.

However, that shipment date has just been changed from June to August of 2016. Pushing back initial shipments is fairly common with crowdfunded projects, since there can be unforeseen issues in manufacturing that come up at the last minute. That being said, the change can be frustrating to backers who have pledged funds and are looking forward to delivery by a certain date.

» Related: The Risks of Backing a Crowdfunded Campaign

What about returns? Again, funding a product has some differences from buying one outright. In this case, those who pledge money in exchange for “perks” (products) are limited to a 10 day window from the time that they make a purchase to ask for a refund—and their perks will be canceled. Since the product comes in contact with pet waste, there is not an option to return your delivered Luuup for a refund.

Does The Luuup Stack Up to Real-World Litter Box Problems?

“We love our cats, but we hate dealing with their litter boxes,” says Luuup co-founder Dini Petty in the first few seconds of their explainer video.

If you’re a cat owner, it’s hard to disagree. Even in the best of circumstances, litter boxes need to be placed somewhere that’s easily accessible for regular cleaning—but not so out in the open that you’re staring at it mid-meal.

And, again, that’s in the best of circumstances. If your cat has litter box quirks or weird requirements that you’ve come to understand only through NATO-level negotiations, your litter box setup and routine might confound the casual observer.

However, according to cat behaviorist Jackson Galaxy, many of the litter box issues you might be experiencing have more to do with placement and cleanliness than your cat’s own quirks.

For example, Galaxy suggests that boxes with a lid are less comfortable for cats, as they’ll feel trapped in the enclosed space. Your best case scenario? Multiple boxes scooped on a daily basis.

While the Luuup does accomplish allowing cats to not feel trapped, due to its open top, Galaxy also suggests that cats prefer litter boxes that are located in “socially significant areas”—which, again, means not pushed into the far corner of a dark room.

Some cat owners looking to follow this suggestion to improve litter box behavior might be less inclined to purchase Luuup, as the lid-less litter box does keep your pet’s waste within view. If you’d like to try Luuup, but want litter to be less visible, check the video below for a solution.

What about cats that kick their litter so aggressively as to cause spray? While I haven’t tried this method with Luuup, I’ve had success placing my cat’s litter trays inside a larger plastic storage bin after cutting a hole in the front for entry, as shown above.

Luuup take an inventive approach to solving litter box problems, but it’s not the first of its kind. Martha Stewart Pets offers a similar sifting litter box for $29.99 (plus shipping). However, it’s worth noting that Stewart’s product receives some pretty poor reviews. Here’s what customers are saying about it:

Since Luuup has yet to ship out, the only review we can draw from is the video shared by their beta tester. While he didn’t appear to have any of the issues customers experienced with Martha Stewart’s design, we also can’t confirm that these problems won’t crop up.

The Bottom Line on Luuup

The Luuup appears to be an ingenious way to bypass the task of daily scooping while helping cat owners keep their furry friend’s boxes fresh and clean. Does it mean that Luuup is truly the smartest, cleanest litter box that you’ll ever buy? That’s really a matter of personal preference.

The sifting litter tray could offer a welcome convenience to multi-cat (thus multi-box) households by relieving the need to stoop over boxes and comb through litter for tiny lumps. Additionally, Luuup’s uniquely rounded corners and large slots make it appear as if some of other problems, such as clumps getting stuck in grates, might be less likely to occur.

With that in mind, if your cat regularly has poor aim or dirties the lip of his or her litter box, cleaning Luuup might end up being more trouble than it’s worth.

While the jury is still out on whether Luuup is the smartest and cleanest, one thing is certain: Luuup pushed back their initial ship date. Again, this isn’t uncommon, but it can still be frustrating for consumers.

Bottom line: Since Luuup is set to be released so soon, we might hold off purchasing this product until they fulfill their commitment to those who’ve already pledged funds.

Write a Review for Luuup!