By selling bulk prepaid wireless plans completely online, Mint SIM delivers unlimited nationwide 4G LTE talk, text, and data service at the lowest prices of any national carrier. In fact, they claim that the more you buy, the more you save.

And with the company’s bring your own phone (BYOP) program, customers can obtain mobile service on their existing unlocked GSM phone, simply by switching out their SIM card.

Mint SIM seems to offer a lot of convenience at competitive prices. But does this necessarily mean they’re the right prepaid wireless carrier for you? Before answering your important questions, let’s quickly cover some background information to ensure we’re all on the same page.

What Is a SIM Card?

Lifewire’s Sam Costello writes that SIM (short for Subscriber Identity Module) cards are “small, removable smart cards used to store data like a your mobile phone number, the phone company you use, billing information and address book data,” and are required in order for most cell, mobile, and smartphone to operate.

Not only does this allow for easily transferring phone numbers and other important information from an old phone to a new one, but it also makes international travel easier, as users can simply swap out SIM cards in their current country.

However, as also mentioned on the Mint website, Sam reiterates that not all SIM cards are the same size:

Which of these sizes does Mint SIM offer? Let’s take a closer look.

How Does Mint SIM Work?

Before doing anything on the Mint website, you’ll want to make sure a) they stock a SIM card that’s compatible with your phone, and b) that they offer coverage in your area. This is as easy as clicking on the Bring Your Phone and Coverage links on the company’s website (see below). 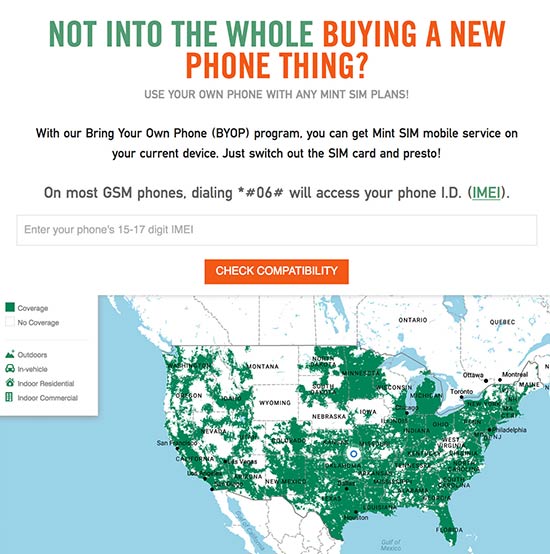 While Mint SIM stocks a wide variety of cards and offers service across much of the U.S. (especially the Eastern half), you’ll want to double check compatibility and coverage before proceeding.

After receiving your card (Mint sends a standard, micro, and nano size in the same order) and signing up for a service plan (more next), you'll need to visit www.mintsim.com, click on the Activate link, and enter the 11-digit ACT code in the upper right-hand corner of your SIM card.

If you want to keep your existing number, click on the Port Existing Number link and enter your old account number and password from your previous company. This will tell them to release your phone number, which often takes just a few minutes. In some instances, though, Mint notes that it could take up to 24 hours.

Then, get out your manual to find out what size SIM your phone requires; standard, micro, or nano. You can also find out where your SIM slot is located.

If the slot is on the side, you can pop it open using the appropriate tool (with your phone turned off, of course) and replace it with the Mint SIM, logo facing up.

In some models, you might need to remove the phone’s back cover, find your SIM slot (which may also require removing the battery in some models), and insert your Mint SIM into the designated slot. Again, with the logo facing up.

Finally, replace your back cover and turn your phone on.

The last step in the process is to configure your data and Access Point Names (APN) settings to make sure everything’s working properly with your new Mint SIM card. 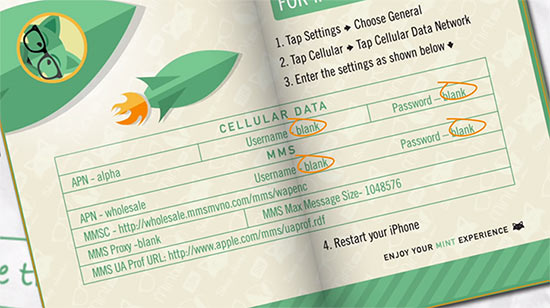 Each Mint SIM card will include a pamphlet that provides key information necessary for proper configuration. Image credit: Mint SIM

For Android Phones: Go to Settings à Cellular (or Mobile) Networks à Access Point Names (APN). Tap the + sign to create a new APN. Enter the appropriate settings shown in the pamphlet that came with your SIM card.

To wrap up, you’ll press the menu icon, click the Save button, confirm the Mint Internet and MMS profile, and restart your device.

How Much Do Mint SIM Cards Cost?

Each Mint SIM plan includes unlimited talk, text, and data delivered on a 4G LTE network. The data purchased is on a per-month basis, and the company will send you an SMS text each time it resets. However, data does not accrue or carry over from one month to the next.

The only differences are the length of service, the amount of data available each month, and how much you’ll pay:

According to Mint SIM’s FAQ, international call rates can vary by country, although you can access additional details on their International Rates page.

All three-month plans come with a seven-day money back guarantee, less S&H, as long as the merchandise is in original condition, with the original box and software, and no pad printing. If any items are missing or damaged, the company will charge a $15 per-item fee.

What Are Mint SIM Customers Saying In Their Reviews?

While we didn’t encounter a ton of online customer feedback for Mint SIM during our research, most of what we did come across was positive.

For example, Android Central obtained detailed feedback from several of their members, who agreed Mint was easy to set up (basically plug-and-play) and provided good instructions, if needed. They noted “performance was good, not great,” and that “it varied wildly depending on the time of day and the location.”

Most users tended to think that these slowdowns occurred since Mint piggybacks off of T-Mobile, who could prioritize their retail subscribers.

In the end, all members agreed that it was a good deal, and “even with its sometimes-spotty LTE data speeds,” that it could be effective if you’re looking to watch media on the go for less money.

The Gadgeteer also liked Mint SIM’s affordable plans, and noted that their service could work great if you “live, work, or travel in an area with T-Mobile coverage.” And if you exceed your data allotment for the month, you’re not cut off—instead, they liked that you’ll only drop to 2G speeds.

Along these same lines, NY Magazine’s Nick Swearingen found that Mint offers “a significant savings for service that isn’t noticeably any worse (and in some cases better) than what I’d get by going to one of the four major carriers.” However, he pointed out that if you’re traveling to more unpopulated areas, you could be out of luck.

From a company perspective, Mint SIM is based out of Costa Mesa, CA and has been in business since 2012. They held a B rating with the Better Business Bureau, based on two negative reviews and 18 closed complaints, as of 11/8/17. These referenced everything from porting problems to coverage issues, and a company representative responded with resolutions in each instance.

In a different Android Central article, Daniel Bader explains that an MVNO is a third-party business that leases access to one of the Big Four’s (Mobile, AT&T, Verizon, and Sprint) networks at a heavily discounted rate.

Then, the voice, messaging, and data provided by these networks is sold back to consumers at a slightly higher rate. This way, customers get much of the same quality and coverage provided by bigger networks but at a lower price, and the MVNO makes a profit.

“In other words,” he writes, “alternative carriers are exactly that: meant to capture the customers remaining in the margins, or those looking to pay bottom dollar to avoid the often-superfluous frills that are, many times, built into the cost of the plans of the incumbents.”

Are There Other SIM-Based MVNO Companies?

There are dozens of pre-paid wireless companies in the marketplace, although most work like calling cards—each minute of data used or text message sent ‘spends’ a certain amount of money. Then, once funds run out, they can be topped off again to repeat the process.

However, there are only a couple options that offer flat rate service like Mint SIM (although none feature the same SIM-based model). These include:

How can you choose between these services (or another) and Mint SIM? Let’s wrap up as we address this final topic.

Our Final Thoughts About Mint SIM

When choosing an MVNO, NerdWallet's Stephen Layton emphasizes that they could help you save a lot of money, but you should keep in mind that customers can receive lesser priority than the carrier’s direct customers. As a result, this could cause data speed problems.

Also, in most instances, you can’t change your plan after buying in bulk, so make sure that you’re fully onboard before placing your order.

But in the end, if you’re willing to pay upfront and don’t need a family plan, the Android Central article above notes that Mint SIM’s “call quality and messaging are more than adequate, so if you really need a cheap phone plan with the promise of internet in uncongested areas and off-peak times, this could be the answer for you.”

If you’re on the fence, though, we might recommend starting with the three-month plan, since it’s the only option that comes with a seven-day satisfaction guarantee.

Write a Review for Mint SIM!