This way, the company claims that Muzo can turn almost anything into a crystal clear acoustic environment, including windows, walls, and desks and other furniture; improve the quality of your sleep, and even help protect your speech privacy. And it promises to do all of this over three steps:

Together, the company tells us that Muzo’s noise-blocking technology can create a “personal zone creator” that can work as an alternative to sleep aids and costly sound machines.

Muzo sure sounds cool, but is it worth the money? Is it even a feasible concept?

How Does Muzo’s Anti-Vibration Technology Work?

Whether on TV, in a picture, or in person, most of us have seen a loudspeaker before. At their most basic, these devices use a magnet, a coil that conducts electricity, and thin fabric, plastic, or paper cone (also called a diaphragm), that work together to convert mechanical vibrations into sound.

Although each of these parts is essential, the diaphragm (the part that vibrates wildly when the cover is removed) is what physically converts these vibrations into sounds.

Comparatively, the exciter technology used in Muzo essentially acts as a loudspeaker without the diaphragm. But if this is the case, then how does it cancel—and generate—sound?

Instead of a cone, an exciter “speaker” is attached upside down to a rigid surface. As the entire structure of speaker vibrates up and down, it applies force to the surface, which then acts as a diaphragm to convert these vibrations into sounds.

But instead of emitting sound from a single point like a speaker, Muzo tells us it sends these vibrations to whatever it's attached to, whether a desk, a wall, or a window.

Specifically, Muzo tells us sound will generate from “every particle of the attached surface” and deliver excellent sound simulation and vivid quality.

This same ‘reverse speaker’ concept is also what allows Muzo’s anti-vibration technology to cancel out incoming energy generated by speech and vehicles like cars, buses, and trains: 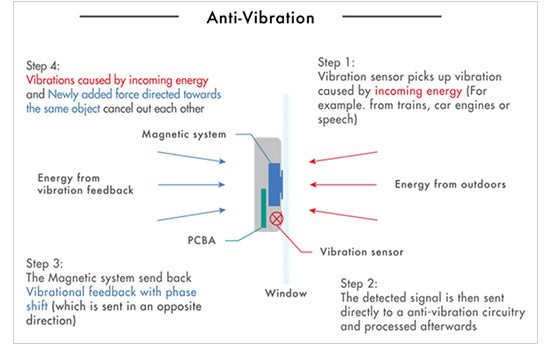 The exciter technology that allows Muzo to generate sound from any smooth surface also allows it to cancel incoming vibration. Image credit: Muzo

With these basics in mind, let’s take a look at some of Muzo’s other details.

What Other Technologies Does the Muzo Noise Blocker Feature?

The Muzo device is compact and portable, featuring a built-in Li-ion battery that can operate for up to 20 hours—and when the time comes to recharge (using the included micro-USB cable), an indicator light will blink to let you know.

On the back, Muzo uses a non-toxic, environmentally friendly TPE (thermoplastic elastomer) that allows you to stick, reposition, and remove the device as often as you like. Manually changing modes and adjusting volume is handled via the main exterior button.

Despite its compactness, Muzo claims to be jam-packed with a variety of cutting edge technologies.

For example, it utilizes a complicated algorithm and a powerful processor to compute a vast amount of signal data, while using a circuit board assembly and a vibration sensor to balance the amount of feedback provided by the NEO magnet system.

Together with the two built-in speakers and the company’s Billionsound Technology (BST), we're told Muzo can generate nearly 1,000 “dynamic, realistic” sound scenes that can drown out intrusive noises, or even help ensure your privacy.

This is accomplished via three different modes:

Inside the Muzo app, which connects to the device via Bluetooth LE, you’ll be able to choose between each these modes, adjust sound levels and noise monitoring, choose from 12 realistic soundscapes and mix them according to your preference, analyze your sleep, set auto-off timers, and adjust the protection range for Secret Mode.

In their crowdfunding campaign, one of Muzo’s stretch goals was to include RGB LEDs that could provide mood lighting selection and “decorate your room with color,” although we didn’t encounter any images or videos of these lights in action. 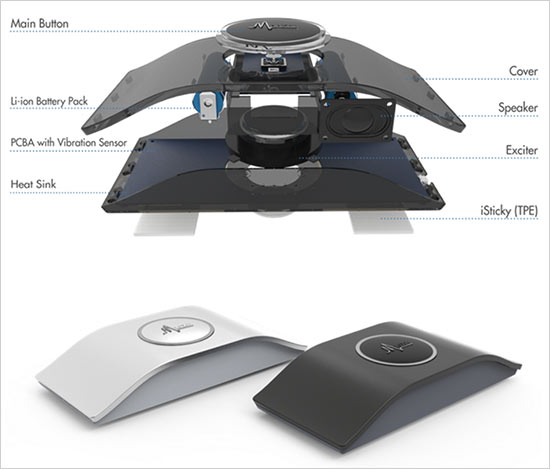 The Muzo device, which houses some unique technology in a small, portable package. But will it work in the real world? Image credit: Muzo

How much will you pay for Muzo's unique approach to noise cancellation?

How Much Does Muzo Cost? What’s the Release Date?

After placing your order, Muzo will send you a link to a survey where you can choose your color and enter your shipping details. All U.S. orders will pay $10 S&H and $15 for the rest of the world.

There weren’t any refund or warranty details listed on the Muzo website, so we reached out to the company to learn more. We’ll be sure to update this article as soon as a response is received.

Given the fact that most Muzo devices hadn’t shipped at the time of our research, could we learn anything from customer feedback?

Muzo Has Raised a Lot of Money—& Eyebrows

Muzo launched through a 2016 Kickstarter campaign where nearly 3,000 backers contributed more than $530K. The company also pulled in more than $1.5 million in pledges on a subsequent Indiegogo campaign.

No updates were listed on Indiegogo (despite dozens of requests from backers), and updates on Kickstarter were only available to backers.

While it technically doesn't exist in the hands of customers yet, how does Muzo's technology compare to traditional noise canceling methods? And what are customers saying about it?

Muzo vs. Noise Canceling Headphones: Is This Possible?

In other words, this outgoing wave is the exact opposite of the incoming sound wave, which is rendered inert before having the opportunity to vibrate your eardrum. The anti-wave basically acts as an invisible wall that prevents sound from being received by the user.

On the other hand, Muzo claims to cancel noise using anti-vibration technology that counteracts vibrations on a specific surface to which it’s attached. Instead of generating ‘anti-waves,’ it generates anti-vibrations.

Consumers are expressing skepticism that Muzo will work as advertised due to the sound being three-dimension.

With noise-canceling headphones, their microphone can intercept sounds at a very specific point (your ear), regardless of where in this three-dimensional space the sound was generated.

However, to accomplish the same in an open room, many consumers claim Muzo would need dozens of microphones and multiple vibration-canceling devices to negate the sound coming from all directions.

And even if this was the case, they claim that Muzo still couldn’t selectively choose which sounds to eliminate. This way (assuming it’s possible), Muzo would basically make everything in the room go silent—including your voice, the voice of anyone else in the room, the television, and so forth.

For a general rundown of this skepticism, we’d recommend checking out this Reddit thread. For a great summarization of what we just discussed, be sure to read mad_scientist_kyouma’s quick response.

If you’re looking for a pair of traditional noise canceling headphones, you have hundreds of options, including those from worldwide brands like Bose, Sony, Sennheiser, AKG, Bang & Olufson, and Audio-Technica. We even wrote about the Kokoon Headphones recently.

In general, you’ll find that the bulk of over-the-ear options are priced somewhere between $100 and $300, while in-ear options can be purchased from overseas manufacturers for as little as $20.

As far as Muzo specifically? We didn’t encounter anything exactly like it currently on the marketplace during our research, which could be because it's a revolutionary concept—or that it violates the laws of physics and isn’t possible.

Reading through the Reddit thread above, one commenter noted that Muzo advertises a very similar concept as Sono, which was widely promoted in 2013 and then largely fell off the face of the earth.

The company behind Muzo is Celestial Tribe, a San Francisco-based startup with a dense background in mathematics, electronic engineering, and information engineering. No team members are listed on their site or either of their crowdfunding campaigns.

Is It Time for You to Make a Pledge to Muzo?

Based on many of the reservations expressed by online consumers—along with the fact that other similar projects have fizzled out—we’re cautiously optimistic about the noise-canceling device.

Fortunately, as long as they don’t experience any delays, we should start hearing about real-world customer reviews very soon, which is one of the best ways to make an informed purchase.

In the meantime, we sent Celestial Tribe a few questions, including evidence for their claims, performance expectations, technical data (recharge times, number of recharges for a battery), and refund/warranty information.

We’ll be sure to update this article as soon as a response is received.

In the interim, don’t leave us hanging. Tell us all about your Muzo experience by writing a review below!

Write a Review for Muzo!