What Is Oclean One?

Billed as the first intelligent audible electric toothbrush, Oclean One features a variety of technological innovations that promise to help users track and correct their brushing habits, personalize their oral care, and take their overall experience to the next level.

The company notes that the sonic toothbrush also features a simple and elegant design, along with a soft touch exterior, a powerful motor, and long-lasting battery. Whether inside or outside, we’re told that all parts are manufactured to exacting specifications for a luxurious feel and appearance.

From kitchen appliances and lighting to thermostats and laundry machines, an ever-increasing number of the electronics we use every day are gaining ‘smart' capabilities. And for a good reason—they can often help simplify our lives.

But a smart toothbrush? The Oclean One is clearly an attractive device that seems to feature top-notch engineering. But how much value will you get from the information it provides? Are there any competing models?

You’re here because you want to learn more before handing over your hard-earned money. Before diving in, though, one important question that might be at the forefront of your mind is: Smart or not, will a more expensive electric toothbrush provide more value than a standard manual one? Let’s quickly address this.

Based on their built-in motor, there’s no doubt that an electric toothbrush will provide more power per dollar than manual options. Although the American Dental Association indicates that they’re equally as effective for maintaining oral health:

The Mayo Clinic reports something similar, although they add, “An electric toothbrush's bristle movement might even help you remove more plaque from your teeth and improve your gum health.”

However, they emphasized during the summary that, “the benefits of this for long-term dental health are unclear.”

Long story short: If you have gingivitis concerns, dexterity or other movement problems (such as arthritis), or simply prefer the unique feeling, then an electric toothbrush could be exactly what you need.

But will Oclean’s smart capabilities add to the appeal of an electric toothbrush? Let’s find out how it works.

Taking a Closer Look at the Oclean One Smart Sonic Toothbrush

Vibrating electric toothbrushes utilize a battery-powered motor to move the attached bristle head in quick back-and-forth motions. If this vibration is fast enough to produce an audible sound, it’s then known as a ‘sonic’ toothbrush.

With this in mind, why does Oclean One claim to represent the next generation of sonic toothbrushes? For several reasons:

On the outside, Oclean’s all-new material and painting process are said to deliver a smooth, luxurious look, along with built-in anti-bacterial and anti-fouling protection. There are no gaps in the ultra-portable unibody design larger than 0.4mm, and it’s rated IPX7 waterproof.

At the head, Oclean uses Pedex diamond, Pedex reminder, and DuPont Tynex Brilliance Pro bristles, which are diamond shaped to allow for a deeper clean, while maintaining a comfortable feel. 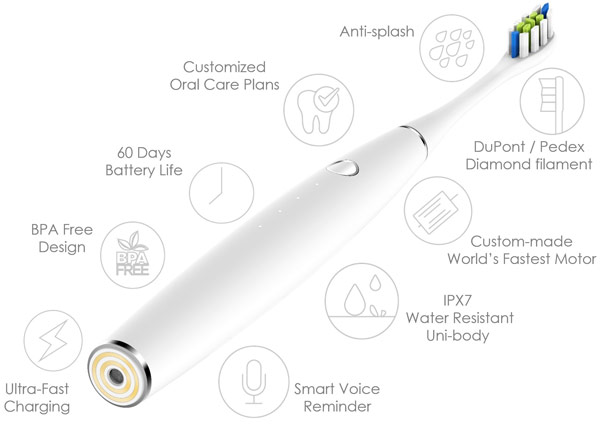 On the inside, the toothbrush features a built-in gyroscope that detects motion, angle, and pressure. Using an intelligent algorithm, the CPU then analyzes this data and passes it along to the smartphone app (more soon) via Bluetooth 4.2, where it can provide users with different modes, care planning, bristle replacement reminders, and reports.

Users can even listen to voice reminders while they’re brushing, while all the over-the-air software and firmware updates are handled seamlessly.

According to the company, Oclean One’s sonic motor features a patented structure design that increases power more than 20 percent over the competition, with a lifespan of about 5,000 hours.

This motor is powered by a 2,600 mAh battery that’s said to vibrate the head at 42,000 rpm, with the largest oscillation movement at 5.5mm. It will last 60 days per charge, and only takes 3.5 hours to recharge.

How Does Oclean One’s App Work?

While Oclean One’s hardware provides users with brushing ability, all of the data it collects is sent to and processed by the companion iOS (v8.0 and higher) and Android (v4.4 and higher) app. How’s it work?

While the company didn’t provide a whole lot of detail on iTunes or Google Play, we’re told that users will receive a smart score after they’re finished that shows how well they brushed.

This takes into account factors like total brushing time, technique correctness, and cleaning and brushing intensity, which you’ll be able to use to earn points and win rewards as you improve your oral health.

Inside the app, users will be able to choose between the different modes and customized cleaning plans discussed earlier, as well as track their progress and obtain suggestions about how to improve brushing habits.

Omate’s marketing manager let us know that if the app isn’t near the user, in order to manually record their activity, they can open it at any later time to modify their plans or adjust other customizations. 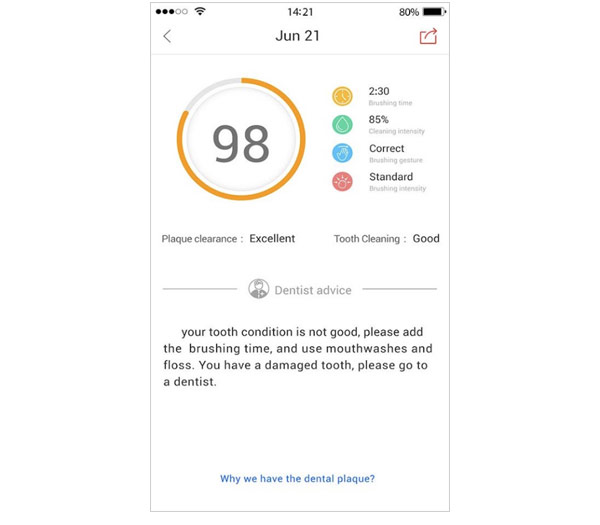 In this Oclean App screenshot, we can see the user’s overall brushing score, including total time, intensity, and technique. Below, suggestions appear that can help improve habits, although the grammar appeared to be less-than-stellar at the time of our research. Image credit: Google

How Much Does Oclean One Cost?

According to the main product website, Oclean One wasn’t available at the time of our research, with an as-yet unannounced Indiegogo campaign on the horizon.

We learned that Oclean’s campaign released on August 31, with an expected shipping date in November 2017. Products and prices were as follows:

Additional accessories include a mirror mount for $9, which will eventually retail for $14.

Important note: We also found a Chinese version of the Oclean One sonic toothbrush available on GearBest for $100.89, with an average shipping time of 19 days to the U.S.

Per the company (Omate’s) marketing manager, all Oclean brushes come with a five-day no question asked return policy from date of reception, along with a one-year global warranty

Oclean One vs. Other Smart Sonic Toothbrushes

There are dozens of sonic toothbrushes on the market competing with Oclean One, many of which come from name brand companies like Philips Sonicare (some of whose models use similar Diamond bristles as Oclean), Sonic FX, and Waterpik.

But what about other smart electric toothbrushes? We encountered a total of four models during our research, two of which were geared toward adults, while the remainder were for children.

From a similarities perspective, all featured app access, Bluetooth connectivity, and the ability to record brushing activity. Were there any standout features between them?

In addition to their respective prices and special features, WebMD indicates that the right toothbrush—electronic or otherwise—will also come down to factors like:

Clearly, if you have a small child in mind, then the Grush model's kid-specific design seems to take the cake. On the other hand, if you're an adult and price is the main factor, then the Oclean One might be difficult to beat, although there's currently no release or ship date available.

Interviewed in the Mayo Clinic article referenced earlier, Thomas J. Salinas, D.D.S. adds that “other features, such as adjustable power levels, timers, and rechargeable batteries" could also be beneficial, depending on your specific needs.

Our Final Thoughts About the Oclean One Smart Sonic Toothbrush

Based on what we learned from the device’s website, the Oclean One seems to be a high-quality, thoughtfully designed sonic toothbrush that, when paired with the smartphone app, could provide insightful information that might help maximize your oral health.

On top of this, the toothbrush was one of the lower priced smart options at the time of our research.

Because of this, it’s no surprise that Oclean appears to be a highly popular product. In fact, since the Indiegogo campaign released on August 31, 2017, the company had already raised more than $50K, with more than three weeks to go, based on an original goal of just $20K.

Considering this, if you’re interested in getting your smart toothbrush for the lowest possible price, now may be the best time to act. And if you’re ultimately dissatisfied with its performance once it ships (keep in mind that delays are common with crowdfunded projects), you’ll have five days to return it for a full refund.

In the end, as long as you can potentially wait a few months, it doesn’t seem that customers have much to lose when it comes to Oclean One, outside of perhaps a few dollars in return S&H charges.

Write a Review for Oclean One!