They also feature a lightweight, ultra-comfortable design and built-in moisture control, which the company tells us makes them ideal for action sports enthusiasts.

According to Protek, they included a state-of-the-art CSR chipset that delivers superb sound—including deep bass—and 5-6 hours of playtime for one earbud, or 3-4 hours for the pair. And when the time comes, they’ll recharge in just one hour.

But will Protek really be the “last pair of earphones you will ever buy”? What can you realistically expect from their audio quality? Will they work for your specific needs?

Let’s start answering all your important questions by taking a look at the details of Protek’s earbuds.

How Do Protek Wireless Earphones Work?

Using Bluetooth V4.2 technology, Protek earphones wirelessly receive audio from any Bluetooth-enabled device, with a transmission range of 20 meters for one earbud and 10 meters for the set (we’ll come back to this point later).

Speaking of which, we’re told that Protek’s earbuds can be used separately or in conjunction from the same device. Alternately, you can share an earbud with a friend and they can independently connect it to their own device.

While Protek’s earphones don’t feature interchangeable silicone tips for custom fitment like some of the competition, we’re told their innovative design will remain comfortably in your ear.

From an audio perspective, Protek’s built-in HD microphone allows you to make and receive calls (one click to answer calls, two clicks to skip to the next track), and the company tells us their newly developed CSR chipset “provides crystal clear vocals while maintaining premium bass sound.” 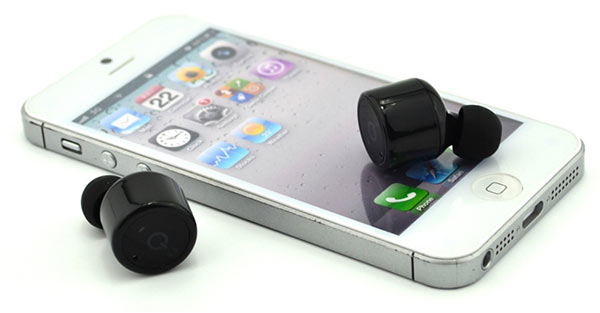 Each of Protek’s earbuds feature a 65mAh battery that delivers four hours of talk time. It’ll also provide 5-6 hours of listening time for one earbud and 3-4 hours for the set. Recharging will take about an hour via a 5V DC adapter.

One unique feature about Protek’s earphones is that their “smart battery” technology will automatically power down if they’ve been disconnected for five minutes, with an eight-day standby time.

Worried about moisture? According to the company, you’ll be able to sweat without any issues. However, they recommend that you avoid submerging the earphones completely underwater.

Before moving on, it’s important to mention two things:

Now, how much will you pay for this wireless technology?

How Much Do Protek Wireless Earphones Cost?

Regardless of which option you choose, all Protek orders come with free shipping.

Note: Protek was on their third batch of earbuds at the time of our research, 96% of which was sold and set to ship September 27. If you didn’t place your order prior to this date, no ETA for batch 4 was listed.

There also wasn’t a refund policy listed on the Protek site, so we sent an online contact form message over to customer service, and we’ll update this review as soon as we receive a response.

How Does Protek Earbuds Stack Up? Are There Any Customer Reviews?

There was a lot of great customer feedback displayed on Protek’s wireless, with common compliments citing ease of use, solid sound quality, and great customer service experiences.

Given this (as well as the fact that the company just shipped their third batch to customers), we were surprised to find zero feedback for the wireless earbuds elsewhere online. This includes common sites like CNET, Engadget, and more.

According to their website, Protek’s earbuds were developed based on a need for groundbreaking innovation in the headphone/earphone industry, with a focus on helping individuals experience true wireless freedom. Currently, the Protek team consists of:

Of these individuals, only Damir had any kind of online presence at the time of our research. Prior to helping form Protek, it appears he worked as a marketing manager in NY and MT.

In other words, it doesn’t appear the company ever raised money through a crowdfunding site like Kickstarter or Indiegogo, and other than some standard Facebook and Instagram posts (as well as a couple YouTube videos), we didn’t find any advertisements or promotional tools used to spread the word.

Let’s continue this thought into the next section as we wrap things up.

Compared to essentially every other wireless Bluetooth earbud the HighYa team has reviewed to date, we’re provided with the least amount of information about Protek.

Here are some important factors to consider:

These are but a handful of questions we think Protek’s manufacturer needs to address to ensure potential customers know 1) exactly what they’re getting and 2) how this compares to the competition.

Additionally, keep in mind that Bluetooth 5 was recently announced in June 2016, which is supposed to quadruple range, double speed, deliver 8X the data broadcasting capacity, and add functionality for secondary services like navigation.

As such, you can probably expect to see much of Protek’s competition integrate this technology soon.

What does all of this mean for you? While the market for completely wireless Bluetooth headphones is new, it’s also expanding rapidly, with major players like Apple and Samsung entering the mix. As such, Protek is up against some very stiff competition.

But at $119, Protek’s Wireless Earphones come in as the second least expensive options we’ve reviewed to date, giving them a distinct advantage if price is your number one concern. We’ll just have to wait and see how they stack up in the real world, and if this low price translates into a better value.