Like everyone else who needs help with their to-do list, you want clean floors without breaking a sweat, and POWERBot’s technology seems like it might fit the bill. Is it really the most advanced, though? And even if it is, does this make POWERBot a better value than the competition?

Here, we’ll help you find answers to your important questions. First, let’s take a deeper look at exactly how the details behind Samsung’s POWERBot.

How Does the POWERBot VR9000 Work? 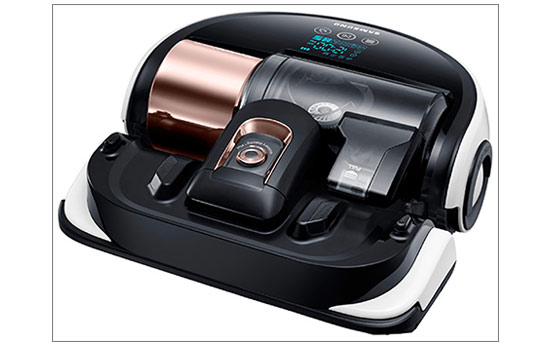 The company tells us one of their goals when creating the POWERBot was to add “more power and more convenience features than any other competitor on the market.” Let’s see what it includes:

To navigate effectively and to calculate the best cleaning path, POWERBot’s Visionary Mapping Plus system uses a built-in digital camera to “read” the room’s ceiling. Combined with its nine other onboard sensors, it uses this data to build a complete map of your home, “including walls, furniture and stairways.”

Then, as it goes about cleaning, your POWERBot’s FullView Sensor—and its 170° viewing angle and 250mm (about 10”) distance capability—will allow it to move around objects with ease. This means POWERBot can clean in a methodical back-and-forth pattern, while minimizing furniture scratches.

Together, Samsung calls this “the most advanced navigation on the market.”

As POWERBot moves about your home, it automatically increases suction power when it reaches a corner. It will also clean the corner three times in order to ensure it gets as clean as possible.

When the time comes, POWERBOT’s sponge filter is washable and easy to replace.

Speaking of cleaning, Samsung claims that, as long as you leave your doors open, POWERBot will clean every room on the floor while your away. It does this through six different modes:

While it’s cleaning, POWERBot’s Easy Pass Wheels allow it to easily transition between surfaces (carpeting, hardwood, tile, etc.) and move over obstacles. Its 12” wide combo brush and sturdy rollers will also leave behind “deep, visible” lines for a clean you can see, including picking up pet hair and dander.

POWERBot’s website provided very little information about their app, and we didn’t encounter an iOS POWERBot app on iTunes. The only option we came across on Google Play was for their 2014 Smart Robot vacuum.

Assuming this version also works for the most recent POWERBot, it appears to allow you to connect with your robotic vacuum wherever you are, giving you the ability to check status, control the device, receive notifications, monitor the camera, and more. 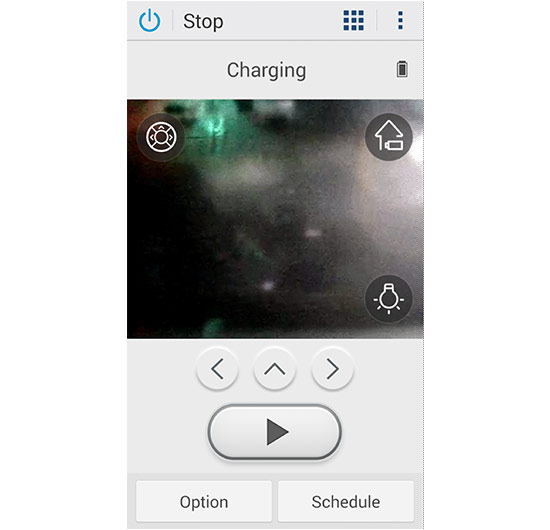 POWERBot’s app allows you to control the device, see through its camera, and more.

What Kind of Battery Does POWERBot Use?

POWERBot uses a li-ion battery, which we’re told can clean up to 1,500 square feet in one charge. Then, it will return to the docking station, recharge for up to 160 minutes (if the battery is fully depleted), and then clean another 1,500 square feet.

And if POWERBot isn’t finished cleaning when it’s time to return to the docking station, it’ll come back to where it left off once it’s recharged.

How much will all this technology set you back?

How Much Does the Samsung POWERBot Cost?

Each Samsung POWERBot is priced at $699.99 (normal retail price was listed at $999) and comes with an extra sponge filter, cleaning tool, and AAA batteries for the remote.

You’ll also get a free 10.1” Samsung Galaxy tablet (which will ship 6-8 weeks after purchase if you decide to keep your POWERBot), along with free Standard shipping. Express and Expedited shipping can be added for more money.

You can purchase POWERBot vacuums through many third-party retailers as well, including Home Depot, Target, Amazon, NewEgg.com, and more. If purchased from Samsung, your order will come with a 30-day refund policy, less S&H.

Replacement parts are priced at:

Considering this price, do POWERBOT’s customers fell like they’re getting a solid value for the money?

Does the Samsung POWERBot Come With Positive Customer Reviews?

CNET reviewed the POWERBot a little over a year ago, and felt that, while it delivers some unique features, top-of-the-line models from other manufacturers (more soon) delivered a better clean at less expensive price points.

Gizmodo had a lot of good things to say about the POWERBot, including its strong suction, along with its mapping/object avoidance capabilities. However, they noted that areas where the vacuum can’t squeeze through (such as some furniture configurations) or reach (such as under cabinets and next to walls), will still need to be cleaned manually, so it’s not a fool-proof cleaning solution.

64 Amazon customers provided their POWERBot feedback at the time of our research, giving it an average rating of 3.5 stars. There, most seemed pleased with its suction power, ease of use, and light weight. On the other hand, common complaints referenced loud operation, errors/difficulty finding base station, and ineffective dirt/debris collection.

As mentioned above, we only found the POWERBot app listed on Google Play, where 70 reviewers had given it an average rating of 3.6 stars. Of those who left feedback, it seems the most common complaint was inability to connect.

How does this compare to other robotic vacuums?

Samsung POWERBot vs. Other Robotic Vacuums

The good news is that if you’re in the market for a robotic vacuum, you have more choices than ever. However, it can be difficult to decide which one’s the best, so here are a few side-by-side comparisons with other popular models.

Roomba’s 880 model features a round design that might not access corners quite as well as POWERBot’s square design, along with its less “smart” and navigational technology. The 880 weighs a couple pounds less than POWERBot and can still be scheduled to meet your needs.

However, POWERBot is higher than the Roomba, meaning that it might not fit under furniture quite as well, and it’s currently priced about a hundred dollars more.

If there was a single closest competitor to the Samsung POWERBot, we think it would be the Dyson 360 Eye. After all, it features similar room mapping technology, camera-based “vision” system, cyclonic action, lithium-ion battery, the ability to cross difference surfaces with ease (although it uses tracks instead of oversized wheels), app connectivity, and more.

Where these two robotic vacuums are not similar is price; you’ll be able to purchase nearly two POWERBots for the price of one 360 Eye.

Neato’s top-of-the-line Botvac 85 also features a combo brush, the ability to map rooms (albeit using a laser-guided system), room-to-room cleaning, multi-stage filtration, the ability to return home after cleaning or when it’s time to recharge, and more.

On the other hand, Neato’s vacuums use nickel metal hydride batteries (NiMH), feature a shorter profile, and weigh about a pound less. Again, one of the biggest differences is that Neato’s 85 model comes in a few hundred dollars less than POWERBot.

Unlike any of the other models we’ve discussed so far, the Robo VacMop doesn’t just vacuum flooring, it can also mop hard flooring as well. Robo VacMop comes in a couple hundred less than POWERBot, although it seems to come with a wider range of complaints from customers.

Will the Samsung POWERBot Make Your Life Easier?

Whether you suffer from allergies, love walking into a clean home at the end of the day, or just want one less item on your to-do list, there’s no doubt that the Samsung POWERBot has the capability to do your vacuuming for you.

Does this mean that it’s right for you? While most professional reviews mentioned that the POWERBot is the best money can buy (second only to the Dyson 360, perhaps), only you can decide if this will translate into a solid value.

We’ve certainly given you plenty to think about here, but there are a few parting thoughts as we wrap things up:

Lithium ion batteries are common in consumer electronics like smartphones, tablets, and other mobile electronics, typically because they can hold a charge for a long time, pack a lot of power in a small space, and can be recharged many times. However, they’re not without their downsides. These include:

Although Samsung claims POWERBot features unparalleled suction, and that it vacuums corners three times before moving on, it may not vacuum other edges around your home quite as well. In fact, even the Gizmodo article we referenced above mentioned that it’s not a solid edge cleaner.

So, while POWERBot might work great for cleaning the open areas of your home during the week, you’ll almost certainly have to freshen up areas next to walls (especially under cabinetry) on a regular basis.

Where Will You Put the Docking Station?

Next, keep in mind that you’ll need to plug your POWERBot docking station into a standard power outlet, and rest the dock on the floor. As a result, you might not have as clean of an appearance as the commercial and website make it seem.

Finally, while we have no doubt that POWERBot will deliver cleaner flooring, it’s important to understand that—unless it can also dust, wash clothes, mop, do the dishes, clean windows, and much more—it’s nothing like a traditional maid service.

Given all this, if you’re in the market for a top-of-the-line robotic vacuum and money is no object, it might be difficult to beat the Samsung POWERBot. If not, it seems there are several options from other manufacturers that might provide a similar level of clean, but at a meaningfully lower price point.

Write a Review for Samsung POWERBot!