Today, we live in a data-driven world. The more information we have, the greater power we yield. This holds true whether we’re talking about world domination, or just running your home more efficiently.

In response to this reality, a bevy of new technologies have been invented that allow us to harness data like never before. Information that—although it’s been floating around for decades—simply couldn’t be collected in any meaningful way.

Enter the Sense Home Energy Monitor. This small device quickly connects to your electric panel and learns to identify and “listen” to each and every appliance in your home—whether they’re smart or not. Then, the information it tracks is sent to your smartphone and provides:

Or, as the company puts it, “Sense listens to every appliance to make your home more efficient, informed, and secure.”

We’ll talk about this again in a moment, but the HighYa team has reviewed several data-gathering devices like Sense Energy Monitor. Most of the time, one of the biggest stumbling blocks we encounter is that, while it’s undeniably cool to have access to all this new information, exactly how much it’ll improve your life remains a little fuzzy.

Is this the case with Sense? Is it worth placing an order? By the time you finish reading this review, you should have a solid answer in mind.

How Does the Sense Home Energy Monitor Work?

The Sense Energy Monitor is a small (5.3” x 2.6” x 1.25”) rectangular device that attaches to the service mains of most split-phase residential electric panels.

Once installed, Sense is able to “listen” for the unique electronic signatures (called “voices”) of attached devices, and record what they’re “saying” millions of times per second. Then, the Energy Monitor implements proprietary algorithms to help recognize each voice and distinguish one appliance from another.

Finally, the Sense device connected to your panel sends this data to your smartphone app.

In a nutshell, the process works over four steps:

Speaking of devices: which ones can you expect Sense to … sense?

Which Devices Will Sense Identify?

Briefly, here’s how the company puts it:

“Sense is able to identify common appliances (refrigerators, washing machines, etc.) on its own. It recognizes other devices, but may not be able to identify them — you can name these once they are detected. We're also developing a "Teach Me" feature that allows you to give an example of devices you'd like Sense to recognize.”

This is certainly helpful, but in our opinion, it’s still pretty vague and could have a pretty big impact on its overall usefulness. For example, if you’re a home automation enthusiast (likely one of Sense’s target demographics), you probably have a lot of non-traditional appliances running at all times.

If you have a decent size setup, these combined devices could consume more energy than your refrigerator and other traditional appliances. In an example like this, although extreme, it outlines that Sense might not always give you an accurate view of your energy consumption. We’ll come back around to this point in the final section.

Sense states that they’re constantly developing new algorithms to detect more devices as they get more data. The good news is that the Energy Monitor works regardless if an appliance is modern or decades old, although it can only be connected to “condos, townhouses, and single-family homes that have their own power meter. It does not yet work in apartment buildings unless the electrical panel is accessible.”

How much will you pay for all this sensing?

How Much Does the Sense Monitor Cost?

Production for the Sense Monitor is staggered. The first two runs are sold out and shipping is underway, and preorders are being taken for the third run, which is set to ship in August.

Sense’s price is $249 (which will increase to $299 after release). Shipping and handling was a flat $13 at the time of our research, regardless of address. Your order may also be subject to sales tax, depending on the state.

Pro tip: As we outlined previously, the company recommends having a licensed electrician install the Monitor, which could add $100 or more to your overall costs.

Sense Solar (it monitors solar usage) is currently available as an upgrade to existing Sense Monitors for $50. Shipping is in August for iPhone and October for Android.

The Sense Home Energy Monitor comes with a 30-day refund policy, less S&H charges, as well as a 1-year warranty against defects in materials and workmanship.

What Kinds of Reviews Has the Sense Monitor Received?

Although the Sense Home Monitor had already undergone two complete production runs, we were surprised at the overall lack of online customer feedback for the device during our research.

Most Sense reviews we found were in a single Reddit thread, although we found it very insightful, with a must-watch app demo. In fact, we learned more about Sense’s functionality in this video than we did on the manufacturer’s website.

One of the biggest questions we initially had was whether or not Sense’s app would allow you to see how much energy each device is using, versus the aggregate usage relative to other devices in your home. Otherwise, we weren’t sure exactly how useful it might be.

Based on what we learned though, this definitely isn’t the case. Within a couple taps, it appears you can see exactly how much a specific device is using (names are completely customizable), how long it’s be on, and even show it on your timeline for faster future reference.

Another tap allows you to view a real time power meter. This way, you can walk around your house turning on different appliances and immediately witnessing their impact on energy consumption.

Finally, Sense’s app allows you to identify trends by the day, week, month, and year, as well as see how much (and what percentage of) power each device is using. 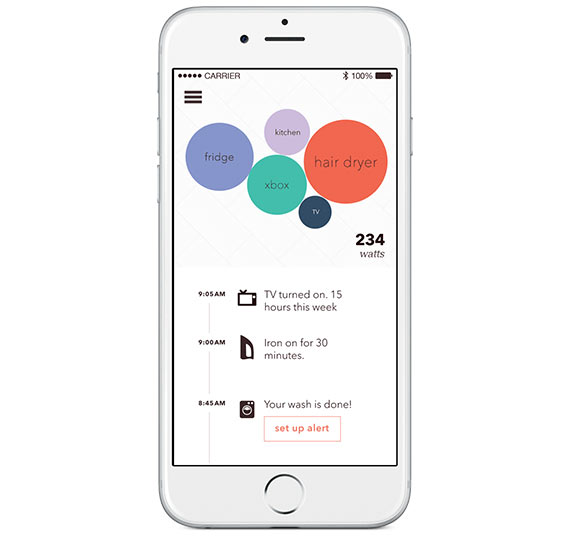 ​On the Sense app home page, you’ll see the relative amount of energy each device is using (colored bubbles), aggregate watts, and alerts. Tapping provides access to even more data.

Much of the feedback in this thread was from beta and field testers, most of whom seemed very pleased with Sense’s performance. In fact, the words “amazing,” “super cool,” and “technological leap” were used more than once.

Common compliments referenced that the Sense Monitor provided more in-depth information than the competition, and that this information was highly accurate. However, it wasn’t perfect at recognizing devices, as one user noted:

“Things like cellphone chargers are finicky because of their very low voltage/draw, and it has trouble with things like multiple garage doors (I learned this over time) where the motors are virtually identical but operate independently. Which, of course, is pretty understandable because the electric signatures are functionally identical from a technical standpoint.”

Sense’s co-founder even chimed in to the discussion and promoted his Q&A featured on ProductHunt. If you’re interested in the Sense’s finer details, it’s definitely worth a few minutes of your time.

Sense Labs is based out of Cambridge, MA and was founded in 2013 by three individuals: CEO Mike Phillips, VP of Product Christopher Micali, and VP of Engineering Ryan Houlette.

Prior to co-founding Sense, Mike founded SpeechWorks and Vlingo, where Ryan worked as Senior Architect. Christopher focused on the design and development of Sense’s consumer-facing mobile applications.

According to their bio on the Sense website, this is the same team that “brought advanced speech recognition technology to mobile phones including voice search, voice text messaging and dictation, and voice-enabled virtual assistant technology. Our products are used globally in Samsung and other mobile phones and in Siri before its acquisition.”

If you search online for home energy monitors, you’ll quickly learn that you have several options, including Curb, Neurio, TED Pro, Smappee, and more. While Curb seems like Sense’s stiffest competition—and some, like Smappee, allow you to switch appliances on and off remotely, unlike Sense—many of these other options don’t offer the same level of detail and insight.

Does this mean Sense’s Monitor is your best choice? Like any other purchase, the “best” option largely depends on your needs. But if you’d like the most data for appliances in your home, along with some cool alerts and tips, most testers seemed to have been blown away by its performance.

With this in mind, let’s loop back to the question we posed at the beginning: Will the Sense Home Energy Monitor improve your life? If so, how? Let’s quickly break it down.

For example, if Sense’s Monitor informs you that most of your television is watched between 6pm and 9pm (probably no surprise there), that it was turned on for a total of 20 hours this week, and that it’s the second most energy intensive appliance in your home, what can you do from there? Do you watch less TV? Do you purchase a new one that uses less energy? All of the above?

This is our biggest question about home energy monitors like Sense (and many other “lifestyle” sensors in general): Yes, their alerts and tips are super cool, and the insight they offer into previously unknown areas of life is fascinating, but what do you do with this data?

Ultimately, this is only something you can answer. But whether you’re a tech junkie that can’t get enough data or are just looking for some added notifications we’re you’re not home (and even when you are), there seems to be something for everyone to like about the Sense Energy Monitor.

Before you go, you might find this How to Choose a Home Energy Monitor guide from HowStuffWorks useful!