About Side Winder by Fuse

Advertised as the best MacBook accessory on the marketplace, Side Winder by Fuse is a patent pending charger reel that promises to eliminate cable damage and fraying, while also helping you organize and stow your charger in less than six seconds.

Just insert your charger, wind it up, and you’re ready to go, even in the smallest of pockets. This design also allows you to choose the desired length of the cable as needed, anywhere between 10 inches and 12 feet.

Although the MacBook Pro is an extraordinarily popular laptop, as mentioned on the Side Winder website, its charger currently holds an average rating of 1.5 stars among well over 100 reviews on Apple.com. Most complaints reference its tendency to tear or become otherwise damaged.

And even if it isn’t damaged, the cord’s 12-foot length can be unwieldy, especially if you’re using it on the go. But has Fuse’s Side Winder reel changed all of this? Is it really the ultimate MacBook accessory, as advertised on their website?

We had the opportunity to back the product’s crowdfunding campaign back in October 2017 and recently received it in the mail. Here’s what we learned from our firsthand experience, as well as our past research.

How Does the Side Winder Charger Reel Work? Our Hands-On Test

Upon opening, we though Side Winder was attractively and thoughtfully packaged, with easy-to-follow instructions. As originally advertised, the device features a simplistic revolving shell design that’s made from plastic, but that feels relatively high quality.

Using thin, cleverly designed plastic pieces that simply slide into place, it can accommodate all MacBook Pro charger models using Magsafe 1 and 2 attachments, including the following:

Note: Side Winder does not fit Apple’s 29W charger for 12” MacBook models. Also, using the reel requires the charger’s extension cable, which is not included with your order. 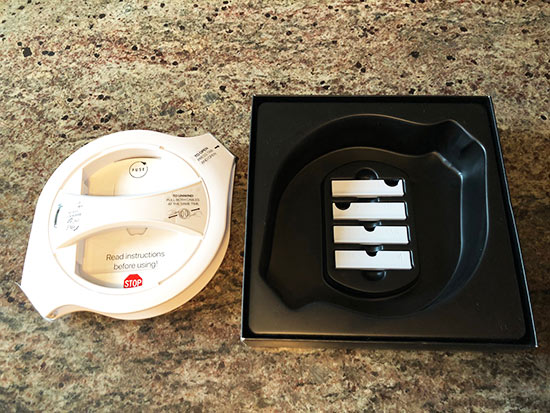 Apple's 60W MagSafe 2 charger fits into the Side Winder by default, although the device comes with a variety of slide-in plastic pieces (right) that can be retrofitted to accommodate all MagSafe 1 and 2 models.

The operation is super simple: After pressing a pushbutton mechanism on the opposite side of its hinge, Side Winder’s top opens to reveal a square tray, which is where your charger's brick will sit. If you own a model other than the 60W MagSafe 2, it's at this point when you’ll insert the included clips, which are clearly marked by model and side.

Once in place on the bottom, the charger’s cables rest inside appropriately sized slots. Side Winder’s top features mirror images of these slots, allowing it to close seamlessly. The four round magnets (two on top, two on bottom), provide a satisfying snap as it does so, while the side mechanism locks in place to prevent unwanted re-opening.

After the top is closed, winding the reel causes the charging brick inside to spin, thereby pulling the cables on each side in a circular motion—almost like a smaller, dual-sided garden hose reel. This provides adjustable length between 10 inches and 12 feet, while also organizing and protecting your MacBook charger from fraying and other damage.

Here, we can see how Side Winder’s top opens to accept the charger’s brick, ensures the cables remain in place without bending them at damaging angles, and winds everything into a super compact package with just a few turns of the wrist.

Overall, after testing the device ourselves, we found that Fuse delivered on all of Side Winder’s crowdfunding campaign promises. While its claim as the "ultimate MacBook accessory" might be debatable, it arrived on time, seemed to be constructed of solid materials that will stand up to regular use, and made winding a MacBook charger easier than we’ve ever experienced.

But will you pay a lot?

Taking a Closer Look at Fuse Side Winder’s Price

Side Winder is currently available only through the manufacturer, in two different models (charger not included):

Fuse Reels offers a six-month refund policy/warranty against defects in materials and workmanship on all Side Winder purchases, which begins from the purchase date. To request one, you’ll need to send an email to reelthefuse@gmail.com and include proof of purchase, such as your Kickstarter or Indiegogo order number.

After sending an email to the address above, we received a response from the company’s founder, who also emphasized that no warranty coverage is provided for the Apple adapter itself.

Are There Other MacBook Charger Reels Like Side Winder?

While we didn’t encounter anything designed exactly like Fuse’s Side Winder during our research, we did find a couple of options that could provide similar reel-based organization and protection functionality.

One of the top choices on Google Shopping was the Powercurl Pop Cable Organizer ($13), which supports 45W, 60W, and 85W MacBook Pro chargers. While the charger’s brick sits in the center like Side Winder’s version, there’s no twisting motion, which means that you’ll be responsible for manually wrapping the cord.

Another popular option on Amazon was the Powerplay cable organizer, priced at $35. These featured a more compact design than the Side Winder, although the leather cable wrap attached directly to the adapter brick. This version also required users to manually wrap cables.

Outside of these, we encountered several different MacBook charger pouches, pockets, and bags priced between $7 and $30, which could help you better organize your cables at home and when you’re on the go.

However, as with some of Side Winder’s closer competition, you’ll be responsible for wrapping and unwrapping the cables yourself, which might not provide the same level of fraying and damage protection.

Finally, back in 2013, LifeHacker’s Melanie Pinola wrote an article about the best way to wrap MacBook’s power cord, which involves first wrapping the big cord around the brick, with the smaller cord wrapped around the brick’s built-in hooks to hold everything in place.

A potentially solid method of wrapping your MacBook charger for maximum organization, although it might not protect against wear and tear as well as reels like the Side Winder.

Again, not to sound like a broken record, you’ll obviously be responsible for doing this yourself, and it might not prevent the frequent bends that can eventually lead to the cable’s rubber sheath fraying. However, it’s completely free and could at least address the organizational aspect, if that’s your major concern.

Our Final Thoughts About the Fuse Side Winder Reel

Fuse Reel’s founder, Logan Bailey, graduated from Brigham Young University in 2016 with expertise in entrepreneurship, business, management, and marketing, according to his LinkedIn page. And based on what we learned from his bio on the Side Winder website, he came up with the idea for the reel after noticing during class that, “every table was covered in an ugly mess of chargers.”

After creating a makeshift design from electrician’s fish tape purchased at Home Depot, Logan tells us that he turned his college house’s basement into a workshop and quickly made Side Winder into a reality.

Bottom line: For us, this Side Winder reel represents a “why didn’t we think of that” moment, as many of us on the HighYa team have experienced damaged MacBook chargers and frequent disorganization.

And while we had to exercise patience during the manufacturing process (as with any crowdfunding campaign), it was well worth the wait, as we think Fuse Reels delivered on all their original promises. We’re anxious to find out what other products the company has in store.

Write a Review for Side Winder by Fuse!