Marketed as “the most advanced sleep tracker,” Sleep Eight is a personalized smart mattress cover that uses unique built-in sensors to help anybody monitor and improve sleep.

As you slumber, Sleep Eight analyzes and records 15 different factors, including sleep patterns, bedroom environment, and disturbances, and sends this data to your iOS or Android smartphone. From there, you’ll be able to quickly access this information to help you better understand (and act upon) the conditions that allow you to get the best rest. Sleep Eight can even use this data to automatically regulate the temperature in your home!

Compared to the competition, Sleep Eight accomplishes this without requiring you to wear a clunky device with blinking lights, which itself can be disruptive.

Are you having trouble sleeping? Or, would you like to ensure that you’re getting the best rest possible? Either way, if you’re interested in tracking your sleep in the comfort of your own home—without being subjected to intrusive sleep studies—there’s perhaps no better time than now. In other words, you’ve got some good options.

Compared to other sleep trackers though, is there anything meaningfully different about Sleep Eight? Who might this sleep tracker work best for? What kinds of results can you expect? Are there some important considerations to keep in mind before placing your order? You’ve got questions, and we’ll help you find some answers in this review.

To make sure we’ve got a solid foundation to work with, let’s begin with Sleep Eight’s details.

Sleep Eight’s Tech Specs—& How They Might Benefit You

If viewed from the right side, Sleep Eight doesn’t appear any different than a standard mattress cover, except for its “simple pattern [that] resembles a ceiling of stars, [but] that is light enough to disappear under white bed sheets.” It’s made from 100% polyester built to withstand stretching or bulging, features a special layering composition that dissipates heat, as well as a hydrophobic fabric treatment that repels water, dust, and stains. This way, you’ll be able to accurately track 15 different sleep factors, without worrying about blinking lights or phones next to your head.

According to the company, the cover is “compatible with most mattress brands and styles, including memory foam, latex, innerspring mattresses, air mattresses, hybrids, and adjustable bases;” is placed onto your mattress just like any other cover (it goes under your fitter sheet), and won’t affect the feel. However, it’s not recommended for split adjustable mattresses.

On the left side of Sleep Eight’s mattress cover, however, you’ll notice a small grey disk attached to a cord. This is where all of its sensors are powered and is what sends the information collected to your smartphone (more in a second). 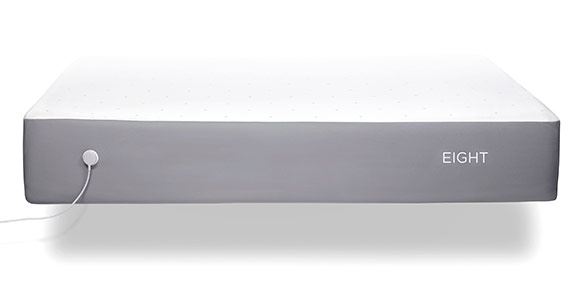 ​Except for the unobtrusive grey disk and cord, Sleep Eight doesn’t look much different than standard mattress covers.

Speaking of which, just what kinds of information does Sleep Eight provide?

What Data Does Sleep Eight Track?

By syncing with your iOS (8 or later) or Android (4.2 or later) smartphone via Bluetooth or Wi-Fi, Sleep Eight tracks:

Sleep Score – Taking all of this information together, the company claims Sleep Eight will build a “blueprint of your individual sleep patterns,” which is constantly updated in order to improve your sleep.

Personalized Climate Control – Using these data points, Sleep Eight determines the perfect temperature settings for your body. In fact, because the mattress cover is dual-zone, it can do this for each side of the bed independently.

From there, Sleep Eight integrates with your smart thermostat (such as Nest), along with other home automation products like door locks and light bulbs, to automatically adjust the temperature to keep your room cool enough for optimal sleep. For the ultimate in control, you can also choose between scheduled and manual temperature adjustments.

More than anything, Sleep Eight claims their smart mattress cover was designed to be simple and to work—without any gadgets in your bed, batteries to replace, or buttons to press—and their app is where it all comes together.

Here, Sleep Eight uses ballistocardiography (i.e. turning your body’s data into graphs and stats) to track what you need, such as sleep quality and duration, sleep cycles, and more. 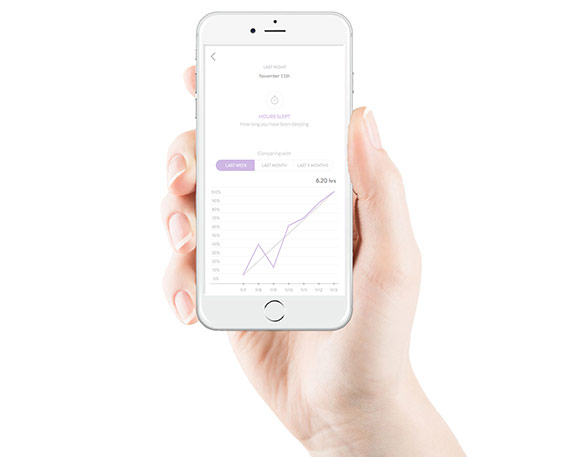 Sleep Eight will also sync with your fitness tracker or platform, such as Apple HealthKit and Google Fit “to identify what helps you sleep best.” This means that regardless of what you’re doing, Sleep Eight can “sync with your world and daily routine.”

How much will all this technology cost you?

The Sleep Eight mattress cover is available in Full, Queen, King and California King bed sizes. Current reserve price is $99, with the remaining $150 due at shipping.

Regardless of when you ordered your Sleep Eight, it will come with free shipping. Inside the box, you’ll find the mattress cover, power cable, smart box with connector cable, and a quick start guide.

All Sleep Eights come with a free 30-day return policy, along with a 1-year limited warranty against manufacturing defects.

Do Customers Think Sleep Eight Is a Good Buy?

As you might imagine, since Sleep Eight had yet to ship at the time of our research, there weren’t any online customer reviews yet.

Based on the fact that it can help you track your sleep without phones by your head or gadgets attached to your body, it’s received a lot of media attention, having been featured in outlets like TechCrunch, The Huffington Post, Engadget, and more. Other than high-level overviews (and a couple showroom and trade show demos) though, there wasn’t any in-depth information about the mattress cover’s real-world functionality.

Given this, although it seems to be a change in direction for the industry, we’ll just have to wait and see if Sleep Eight lives up to expectations. We’ll be sure to update this review as soon as feedback starts flowing in.

Although Sleep Eight seems to have carved out an unexplored niche for themselves, the sleep tracking industry is quickly evolving past being required to keep phones by your head (as mentioned on the Sleep Eight website), don wearable devices, or endure flashing lights throughout the night.

Although there seems to be a lot of excitement about all this new smart sleep tracking technology, there’s also a lot of hand-wringing going on about just how useful these devices are. In other words, even with all this information at your fingertips, what do you do with it? How can you realistically use it to measurably improve your sleep?

From this standpoint, it’s positive that Sleep Eight can sync with your smart thermostat (and supposedly, other smart devices at time progresses) to affect real change (e.g. temperature) that can help you sleep better. However, just like we’ve noted in our other reviews, we’d have to wonder exactly what you’ll use Sleep Eight’s other data for, other than for curiosity’s sake, since the app doesn’t appear to provide recommendations.

Will Sleep Eight Really Change Your Sleep “For Ever & for Better”?

At HighYa, we’re passionate about new tech, and we enjoy watching as products like Sleep Eight move through funding, production, and finally into customers’ hands. But before they make it to you, keep in mind that there are often delays, and in some instances, these products fall far short of customers’ expectations (Coin Credit Card and TrackR immediately come to mind).

While we’re certainly not saying you’ll experience the latter with Sleep Eight, there appears to have already been some delays. According to the company’s most recent blog post posted 3/21/16, only the first 50 customers have received their mattress covers, although the second wave was originally expected to have shipped by now.

What does all of this mean for you? In our opinion, if you’re in the market for a non-wearable sleep sensor that isn’t located near your head, such as on a nightstand, your options are pretty much limited to Sleep Eight. But unless you’re passionate about trying out new tech, you might want to wait until the customer reviews start rolling in before placing your order.

Write a Review for Sleep Eight!