Claiming to offer a superior sleeping experience, the Sleepgram is a microfiber pillow utilizing multiple firmness combinations to tailor to your preferences.

Stating that they felt traditional feather pillows were in need of a serious facelift, the creators of the Sleepgram say that they revised the plan for their product dozens of times before finding the perfect pillow.

What separates the Sleepgram from other pillows is the way you can use their combination of soft and firm microfiber pillows to find just the right firmness for you.

On the product’s website, we’re told that the Sleepgram pillow started with a series of sleepless nights faced by a company co-founder’s wife.

After trying out several different mattresses, they discovered that the key to a better night’s sleep actually lied in the pillows the couple was using. After sharing their story with another eventual co-founder, the initial idea for Sleepgram took root.

On the about us page of the website, we’re told that Sleepgram was born with the mission to make sleep, and pillow shopping, a happy experience.

Neither of the founding members appear to have a background in the sleep industry, with the website claiming that their prior experience was in software engineering and data analytics.

With all these things in mind, we wanted to know how well the Sleepgram pillow worked, so we tested the pillow for a month before writing our review.

Our Experience With the Sleepgram Pillow

As we mentioned above, the main aspect separating the Sleepgram from traditional feather pillows is the two different microfiber pillows. Basically, your pillow arrives in the mail with two inserts that fit into a 100% cotton cover.

One insert has a red tag on it and one has a blue tag. The insert with the red tag is of medium firmness while the blue insert is soft.

For me, it was pretty fun to see the Sleepgram box arrive. It was heavier than I thought and that’s due to the fact that there were two pillows and four inserts in the box.

The directions tell you to throw the insert pillows into the dryer for a few minutes so they expand. I did that, and then my wife and I made two pillows with the red- and blue-tag pillows, creating a firm pillow.

The first few nights I used the pillow, my back hurt the next morning, something that’s pretty standard when you change pillows or mattresses. Your body has to get used to a spine alignment and weight distribution.

There was, no doubt, a big difference in support between my old pillow, which was two cotton pillows crammed into one pillowcase, and the Sleepgram that included two of their firm pillows.

The initial back pain wore off after about four days. I started to notice that I was sleeping better and not waking up as much as I normally do. Typically, I wake up at least three or four times a night but that number was cut in half during the weeks I tested the pillow.

I also noticed that there was a streak of three or four nights where I only woke up one time. Based on this, I believe that the Sleepgram pillow provided me a better night’s sleep.

Another thing to note is that, during the time I tested the pillow, there are only a couple of times I had to adjust the pillow after I woke up. It seemed to be more supportive than my old cotton pillows.

One of the things I noticed is that, when I put my head on the pillow, it gave until just about a third to halfway down and then held steady. My head didn’t sink all the way down like it does with my old pillows.

My wife, who also tried the pillows, had a slightly different experience. She said that the pillow compacted too much during the night and the ear on which she slept hurt in the morning. 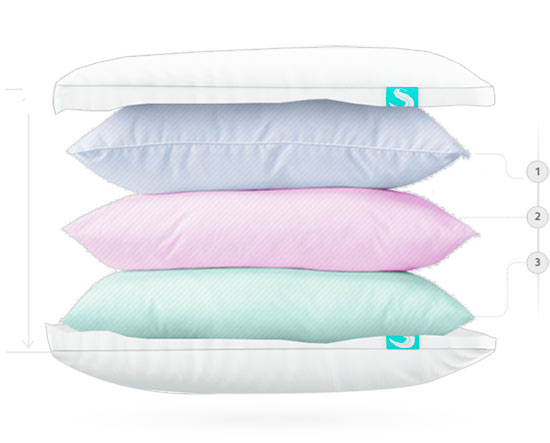 This image shows how the Sleepgram’s three-chamber design is situated within the 280-thread count cotton cover. Credit: Sleepgram.com

As of this writing, the Sleepgram pillow was available exclusively from the product’s main website online. It is available in two different sizes, standard/queen (18” x 26”) and king (18” x 33”), and each is available in four different quantities:

Shipping is based on the number of pillows you order, with standard shipping going for anywhere from $9.95 for a single pillow or a two-pack, to free for larger orders.

The checkout page informs us that each order comes with a 100-night return policy, not including any shipping & handling fees.

To initiate a return, you’ll need to reach out to customer service by phone at 877-257-5337 or via email at help@sleepgram.com. You’ll be required to pay return postage to get the product back to the manufacturer.

Sleepgram vs. Other Similar Pillow Designs

There are thousands of different pillows available both online and in-stores today. That said, are there any options out there that utilize a similar design to the Sleepgram pillow?

We found one pillow, the Morphiis, that’s similar to the Sleepgram in that you can insert multiple pillows into your pillowcase to adjust firmness. The Morphiis has six 100% cotton inserts. Its price tag, at the time of publishing, was $85 for a queen-size pillow and $95 for a king.

Whereas the Sleepgram can fit up to two of their insert pillows, the Morphiis utilizes up to six insert pillows. The advantage here is that Morphiis’ pillows can add a significant height difference for side sleepers with bigger shoulders.

We also came across single pillows that utilized various designs to provide firmness, like the WENERSI Premium White Goose down pillows or the Three Geese White Goose Feather bed pillow.

These pillows tend to be more affordable than Sleepgram, ranging from $24.99 to $39.99 and up when we checked during our research.

In terms of brand reception and feedback, several of these products featured hundreds of customer reviews on Amazon, many of which were five-stars. At the time of publishing, the Sleepgram had an average rating of four stars from 99 reviewers.

Common complaints included remarks about the pillow not being firm enough or too flat, as well as not being cool enough.

If you’re searching for the perfect pillow for your specific needs, consider the following:

The Bottom Line: Our Thoughts on Sleepgram

Based on everything that we’ve learned about the Sleepgram pillow and our own experience, we believe the pillow provides a solid night’s rest for most people who try it.

We believe that the Sleepgram improved our sleep, a fact that’s confirmed by the positive reviews the pillow gets on Amazon.

One of the most important factors in choosing a pillow, however, is budget and preference. On the budget side of things, we believe Sleepgram’s price is higher than many cotton- or down-based pillows. If money is a concern for you, then the Sleepgram may not be worth its relatively high price tag.

If sleeping preference is your deciding factor, then Sleepgram may be worth it because you’ll have 100 days to try it out. Experiment with the various options you have for calibrating firmness. Use the red and blue together, then do the blue by itself and the red by itself.

Editor's Note: Sleepgram Pillow was sent to us free of charge for review. This review is based on our honest opinion and impression of the pillow after sleeping on it for a number of nights. There is no material relationship between Sleepgram and HighYa. This article was revised on 9/12/18 by J.R. Duren

Write a Review for Sleepgram Pillow!