Founded by the co-winner of the 2009 Nobel Prize in Medicine, TeloYears has developed a patented method for measuring telomeres, which they claim can help you “discover what your DNA says about how well you’re aging.”

After placing your order, the TeloYears kit is sent right to your doorstep. You’ll collect just one drop of blood from your finger and mail it back in the pre-paid envelope to the company’s CLIA-certified lab.

Once there, they’ll measure your telomere length. These are the protective caps on the ends of your chromosomes that tend to shorten and fray as you age, depending on factors like genetics, environment, stress, and lifestyle.

Based on this length, the company will report your age in TeloYears, or the actual age of the typical man or woman whose telomere length is similar to yours. This number can be older or younger than your actual age.

If older, TeloYears claims you can use these results to improve your lifestyle and fitness choices. Then, you can have your telomeres re-measured in 6-12 months to track your progress.

The cool factor for TeloYears’ testing service is clearly off the charts. But what about its real-world relevance?

In other words, can you realistically expect to improve your health based on a TeloYears report? Does it represent a valuable use of your money?

What does the science have to say? Are there other telomere measuring services competing in the same space as TeloYears?

You have a ton of questions. Here, we’ll discuss what we learned during our research to help you find some answers, starting with the basics.

How Does TeloYears Measure Your Telomeres?

How Do Telomeres Relate to Aging?

You know how shoelaces have thin strips of plastic at the ends (known as aglets)? They’re in place to help protect it and make lacing your shoes easier. But over time and with regular use, they become frayed and are less able to their job.

Telomeres, located at the tips of our chromosomes (structures made of tightly-wound DNA), do much the same thing.

These repetitive nucleotide base pairs help keep our DNA from coming apart during cellular division, thereby ensuring our genetic data is accurately transcribed to the new cell. But the more they protect our DNA during this process, the shorter they grow and the more frayed they become.

Once telomeres become short enough, the cell is no longer able to replicate, leading to a state called senescence (deterioration; aging). In addition to the natural aging process, it’s thought that other factors like oxidative stress, inflammation, toxins, radiation, lifestyle, and the environment can also impact how quickly our telomeres age and reach a senescent state.

An illustration of how telomeres (the orange ends of the chromosome) can shorten over time as they protect genetic information during cell division. Image credit: Telomere Diagnostics

Important note: Currently, the TeloYears test is only available for individuals between the ages of 20 to 80 within the United States, except for the states of Maryland and New York.

According to TeloYears, the company can use this telomere shortening as a biomarker (a measurement that can be used to indicate disease, infection, or environmental exposure) for the lifetime of your cell. Or, as the company puts it, your telomere length is an indicator of how much “cellular reserve” you have remaining.

To accomplish this, TeloYears measures the average length of your telomeres (known as ATL) using a “proprietary quantitative polymerase chain reaction (qPCR) assay,” which uses DNA extracted from the white blood cells in the sample you provided.

This is because leukocytes (white blood cells) are particularly sensitive to pathological stress, so we’re told they may better reflect your whole-body health.

Then, your ATL is compared to the typical physical age of men and women who share the same. This determines your age in TeloYears, which may be younger or older than your actual age.

All of this data is summarized in a TeloYears Test Report, which graphically displays: 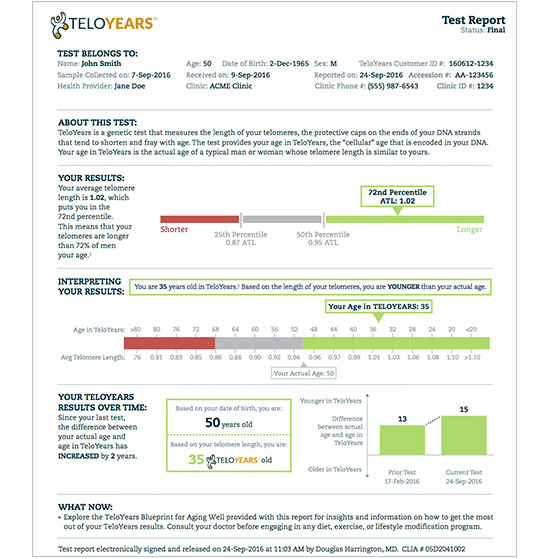 In this example, the individual’s telomeres are longer than 72% of men his age, putting him in the green zone. Image credit: Telomere Diagnostics

If TeloYears finds that your telomeres are longer than at least half of the people your age and gender (50th to 100th percentile), this puts you in the green zone.

Along with your TeloYears test, you’ll receive the Blueprint for Aging Well, which promises to help you take action based on your results.

This includes a self-assessment tool that can help you manage your TeloYears, understand how different factors can accelerate telomere shortening, novice-to-expert action plan suggestions (e.g. physical activity, stress, sleep, etc.), and a “deep dive” into the science of telomeres.

All of your TeloYears report information is available only to you and the ordering doctor, as mandated by HIPAA.

What Does Science Say About the Usefulness of Telomere Tests Like TeloYears’?

To be upfront, this is a massive discussion. But we know you’re busy, so we’ll provide as balanced a look as possible, in as short a space as possible.

What Is a Biomarker?

We quickly referenced the term earlier, but in a nutshell, it’s perhaps easiest to think of a biomarker as a biological signpost that can indicate if something is wrong. In other words, it can work as a clinical and a diagnostic tool to indicate a biological state or condition.

From there, your doctor might use these common biomarkers to formulate a treatment plan (e.g. ibuprofen for fever, adjusted diet for cholesterol, etc.).

Why is this an important concept as relates to TeloYears?

Since telomere measuring tests like these are a recent phenomenon, much of the related research—while substantial—is currently in its infancy. As a result, authoritative websites report that it’s unclear exactly what kind of biological marker is represented by telomere length.

Is There Clinical Proof For the Accuracy of Telomere Measurement Tests?

Continuing this thought, the TeloYears website is correct; there is some clinical evidence that might associate telomere length with diseases like obesity and diabetes, cardiovascular disease, cancer, and Alzheimer’s disease, along with mood disorders like anxiety, depression, and panic disorder.

Further, there are also some studies indicating that changes to lifestyle factors, such as exercise, diet, and stress management, may slow down telomere shortening and even increase length in some instances.

In fact, the TeloYears website lists 12 such studies to support some of their claims. And if you want more than 6,500 related studies, try searching for the term “telomere length” on the NIH’s PubMed.

Again, though, while existing evidence seems to indicate a close relationship between telomere length and aging, there doesn’t seem to be this same level of evidence showing that telomere length can act as any sort of biomarker to formulate a health plan.

Let’s carry this thought over to the next section.

What Are Authoritative Websites Saying About Telomere Tests?

The HighYa team isn’t staffed by geneticists. But many authoritative websites we encountered during our research reinforced the potentially wide chasm that exists between measuring telomere length and its value as relates to an assessment of health.

The Genetic Literacy Project notes the scientific community understands that age and telomere length are related, but that there are a lot of discrepancies in the literature beyond this most general finding:

"To the end, it's unclear of telomere length is of any real clinical value. Is it truly a valuable biomarker for unhealthy behaviors? Perhaps it is just another superficial sign, like gray hair and a shorter walking stride, of aging."

They go on to conclude that monitoring or repairing telomere length might be akin to dying gray hair in the fight against aging. "It could be nothing but cosmetic."

Science-Based Medicine takes us deeper into this thought process:

"We are nowhere near clinic- and community-ready measures of telomeres, because our methods disagree with each other and with assessments analyzed in other labs, and because efforts to develop summary numbers depend on the assumptions and statistics that are used. Importantly, there are no commonly-accepted calibrators or standards, so comparison across laboratories and the studies that rely on them is difficult."

This article can be a dense read, but we’d highly recommend checking it out if you’re looking to get a good handle on the situation.

Finally, writing for Slate, Daniel Engber calls many of these telomere testing services a “spurious health trend,” based on the overall lack of clinical consensus:

“A review from 2010 listed 10 studies of telomere length and early death, of which five found no association whatsoever. Different groups also tried and failed to link the length of telomeres with patients’ blood pressure, lung function, and grip strength (an indicator of overall health). Some studies did find that shorter telomeres predicted cognitive impairment—cellular aging might predispose you to dementia, for example—but other analyses found the opposite.”

What We Learned From TeloYears Reviews

From a company perspective, Menlo Park, CA-based Telomere Diagnostics was co-founded in 2010 by Elizabeth Blackburn who, along with Carol Greider and Jack Szostak, won the Nobel Prize in Medicine for 2009.

However, the TeloYears test wasn’t released until October 2016. As a result, we only found one consumer-oriented review on Reddit, who—while it didn’t appear they tried the test—seemed to harbor much of the same skepticism about the functionality of the information it provides.

We also found reviews in publications like the New York Times and Wall Street Journal, although these weren’t hands-on reviews.

Now, what will you pay to have your telomeres measured with TeloYears?

How Much Does TeloYears Cost?

The TeloYears test is priced at $89. 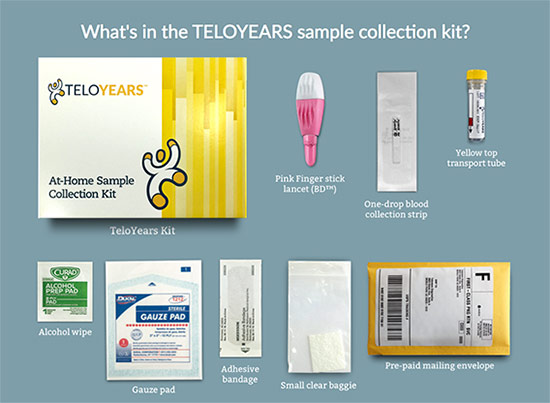 All orders come with a 30-day refund policy, less $20 to cover S&H, as long as you haven’t shipped your blood sample to the company’s laboratory.

How does this price compare?

How Does TeloYears Compare to Other Genetic Tests?

We’ve frequently written about popular genetic testing services, and even wrote an in-depth guide to figuring out if a genetic test is right for you.

However, those tests are typically used for entertainment or genealogy purposes, or for detecting the presence of cancer or genetic diseases.

On the other hand, there are dozens of telomere measuring tests competing in the same space as TeloYears. How do their key factors stack up?

Here are a handful of popular options (note: some options will require a blood draw at a clinical, instead of your home):

As you can see, TeloYears is the least expensive option. And from a consumer perspective, they promise to provide the most down-to-earth, actionable information. But does this mean you should place your order?

We think the disclaimer at the bottom of the TeloYears website succinctly summarizes much of what we’ve discussed here:

“The TeloYears test is not intended for screening, diagnosing, treating or preventing diseases or medical conditions. … The performance characteristics of this test were determined by Telomere Diagnostics. It has not been cleared or approved by the U.S. Food and Drug Administration.”

In layman’s terms, outside of the laboratories in which telomere tests like TeloYears are processed, they’re not subject to any oversight by the FDA. Their claims—including their diagnostic accuracy—aren’t monitored, their results (and the data they’re based on) are determined in-house, and other telomere testing services might not deliver the same conclusions.

Given this, is there any medical validity to TeloYears’ testing service? Again, we’re not genetics experts and we didn’t try the service ourselves.

But if you’re looking to make a fully empowered decision, you now have a core understanding of how TeloYears works. As a result, we’d recommend making an appointment with your physician and asking any potential questions raised here.

In the meantime, with a co-winner of the 2009 Nobel Prize in Medicine as a founder and an extensively informative website, we have no doubt that TeloYears is a legitimate company. But only by taking what you’ve learned here and speaking with your doctor can you decide if it’ll deliver the right level of value.

Write a Review for TeloYears!