About The Light Phone

Designed to be used as little as possible as a seamless extension of your smartphone, the credit card-sized Light Phone only allows you to make and take calls.

For those times you don’t need the internet in your pocket, but do need a little peace of mind, the unlocked 2G GSM Light Phone is all about minimalization.

Its intentionally limited functionality removes texting from the equation and features just ten speed dials, vibrate and ringtone modes, and a desktop app with Mac, Windows, and Linux support, while allowing you to keep your same number. In addition, you’ll only be charged a minimal fee of $5 per month to use The Light Phone.

Based on its diminutive design and limited features, it’s clear that The Light Phone might be able to help you “leave your smartphone behind and enjoy peace of mind,” as claimed on the device’s website.

But is this what you're really getting for your money, or are you being sold an image, more so and than a real-world solution to overstimulation? The Light Phone raises some interesting questions, and here, we'll help you find some answers.

What Problem Is The Light Phone Looking to Solve?

You only need to walk out your front door to know that we’re a smartphone-obsessed culture. The Internet is bloated with videos of people getting into all sorts of uncomfortable situations because they were more focused on their phone’s screen than what was going on around them.

Given this, it’s no wonder that a recent fact sheet posted by the Pew Research Center revealed 95% of Americans own a cell phone of some kind, which is up a whopping 77 percent from six years earlier in 2011.

Specifically, 81 percent of U.S. adults own a smartphone, which we use an average of about 1.75 hours per day to consume various types of media.

But what if you could get this time back by removing the temptation of a smartphone in the first place? Would we be able to appreciate more of the real world around us and increase your quality of life?

After all, as noted on the device’s website, The Light Phone is centered around the idea that “Time and attention are two of the most important things we take for granted.”

How Does The Light Phone & Desktop App Work?

Available in Matte White or Matte Black colors, The Light Phone is an unlocked 2G GSM phone that weighs in at 1.25 ounces, features a basic OLED display, uses a SIM card to function right out of the box, and provides 45-90 minutes of talk time (depending on connection). Because it doesn’t rely on Bluetooth, the phone will work equally well regardless of its proximity to your smartphone.

The manufacturer tells us you’ll set up the phone through a desktop app on your computer (lightphoneapp.com), starting with a text to your existing smartphone. This text will contain two numbers, that “when dialed will turn ON/OFF call forwarding accordingly.”

Note: Obviously, this means that your existing carrier must support call forwarding in order to forward your smartphone calls to The Light Phone. We’ll talk about additional potential limitations shortly.

Here’s a quick overview of the process:

When you’re ready to return to using your smartphone, turn off call forwarding to your Light Phone. 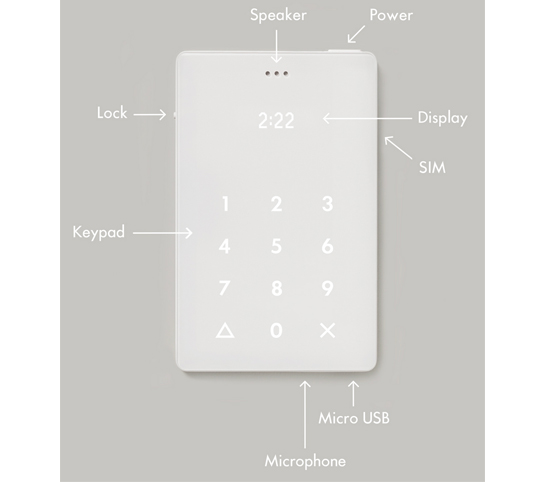 According to the company's FAQ, The Light Phone's battery will last about 2-4 days on standby, depending on signal strength. As such, the company recommends fully charging before ‘going light.’

In a nutshell, The Light Phone only features two modes:

Does The Light Phone Have Any Limitations?

Although The Light Phone is SIM-based, they don’t offer SIM cards to international customers, which means you’ll need to purchase something locally, if applicable. Even then, the cloud software platform will not be available and therefore unable to mask outgoing calls with your primary number.

Furthermore, since The Light Phone was specifically designed as a second casual phone, it shouldn’t be considered a primary, standalone option. Further, you can currently only forward one phone to The Light Phone and any voicemails won’t be accessible (except directly from your smartphone).

Important note: Based on their marketing approach and materials, it seems like The Light Phone is geared toward an outdoor aesthetic. However, the device’s FAQ notes that “Sunlight will significantly reduce the visibility of the display and keypad,” so it might not be ideal in bright light.

Similarly, the FAQ also clarifies that “Emergency calls from your phone may not be possible in some areas or circumstances” and that “In less populated areas, the weaker digital signal deployed on higher frequencies may not be sufficient to reach a cell tower.”

As a result, they recommend, “Before traveling in remote or undeveloped areas, plan an alternate method of contacting emergency services personnel.”

Potential limitations aside, what will you pay for the minimalization provided by The Light Phone?

How Much Does The Light Phone and Its Plans Cost?

The Light Phone II Black is priced at $350. The Light Gray color is available for pre-order but at the same price.

A Light Plan costs $30 per month. It includes unlimited domestic talk and text along with 1gb of data for the necessary features in your phone.

You're able to keep your existing number or get a new one through AT&T, which is the carrier The Light Phone II uses.

Each order comes with a free SIM card which you use to activate your phone upon receipt.

Does the Light Phone Have Any Competition?

Even if you search online for a “basic cell phone,” you’ll find that many models still feature large color screens, online access, onboard music storage, the ability to text message, and many even come with at least basic games (think Solitaire). In other words, even a ‘basic' modern cell phone makes The Light Phone look like some Stone Age relic by comparison.

In short, it doesn’t currently appear to get more basic than The Light Phone.

In an ironic shift of perspective, though (even compared to a few short years ago), you’ll have to pay for The Light Phone’s simplicity. Whereas many basic cell phones can be purchased for just a couple bucks (or even come free with a signed contract), the phone's $150 price tag could certainly be considered steep.

Our Final Thoughts About The Light Phone

In our opinion, there’s little room for argument that The Light Phone features a fantastic minimalistic marketing approach and slick packaging design to invoke a minimalistic aesthetic. By challenging the status quo and helping us (at least temporarily) disconnect from our overconnected world, the company seems to signal a forthcoming change in perspective.

But, in light of today’s world, we have to ask:

Some of these are deeper questions than others, but the bottom line is that only you hold the answers.

Write a Review for The Light Phone!