TV Frog is an Android media hub that connects to your TV via Wi-Fi or Ethernet and allows you to stream your own media, such as photos and videos. After downloading the appropriate apps, you’ll also gain access to movies and TV shows from popular media services like KODI, Netflix, Hulu, and YouTube—and in crystal clear 4K Ultra HD.

The website tells us the hub will also be able to stream music, allow you to enjoy Android gaming, and browse the web whenever you please, all in a plug and play device that promises to “deliver unparalleled entertainment at no additional costs or stress.”

But before you hand over your money, you’ve come here to learn more about TV Frog, and whether or not it’s the right device for you. Will it really “make your TV smart”? And even if it will, are there other devices competing for your dollar?

What Is TV Frog & How Does It Work?

In 3 Easy Steps For Cutting the Cord, we explain that there are three key components for streaming content to your TV (or making it “smart”):

As you probably guessed, TV Frog represents the hardware in this equation. Basically, it houses software that processes signals received through a Wi-Fi or Ethernet connection and translates them into images that appear on your TV.

It also houses downloadable third-party software (or apps) that can enhance the viewing experience, including popular options like Netflix, HULU Plus, and Sling TV. You can store as many apps and other media as the device's hard drive can hold.

What Are TV Frog’s Specifications?

As mentioned, TV Frog works over a Wi-Fi or Ethernet connection. It also features 1GB RAM and 8GB memory, utilizes a Quad-Core Cortex A7, 2.4GHZ CPU, and runs on an Android version 6.0.1 Marshmallow operating system.

On two sides of TV Frog, you’ll find a variety of ports that allow you to import pictures into a library for later browsing, as well as to play all your music (including AAC, MP3, FLAC, OGG, WAV, and WMA formats). These include:

According to the website, you’ll be able to access a cue sheet, tag your files, integrate with MusicBrainz, and create smart playlists. TV shows can be viewed by episode and season, and can be sorted by watched status, description, and actors.

If you need to browse the web or stream content directly from the Internet, you can also use TV Frog’s wireless mouse after connecting its USB Bluetooth receiver into the back and downloading the browser app. 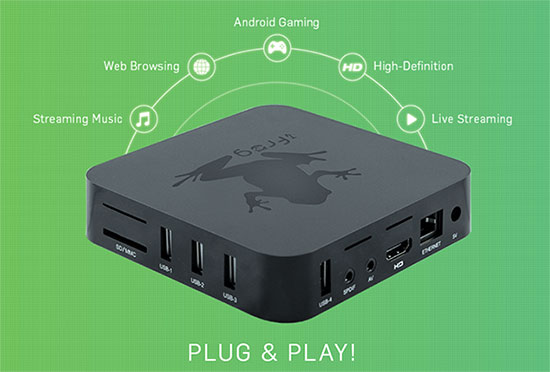 What will you pay for all of these features?

How Much Does TV Frog Cost?

How much you pay for each TV Frog device depends on how many you purchase:

Each unit includes a TV Frog, one HDMI 4.1 cable, one wireless mouse, and one AC/DC adaptor and power cable.

At the time of our research, the company was also offering a free universal power adaptor and surge protector they claimed will allow you to use TV Frog, or any of your other devices, in any country in the world.

All TV Frog purchases do not come with a 100% guarantee, although after reading through the Terms, we learned that this guarantee comes with some fairly strict guidelines.

First, we’re told that all products are sold “as is” and all sales are final. In other words, there are no refunds, only exchanges permitted.

Second, you can process an exchange within 30 days of receiving your device, although it “must be unused and in the same condition that you received it. It must also be in the original packaging.”

In order to request an exchange, customer service can be reached at 888-836-8088 or support@freeseetv.com.

Are There Any TV Frog Customer Reviews or Feedback For the Company’s Other Products?

We didn’t encounter any firsthand customer feedback for TV Frog at the time of our research, although we did find an in-depth Snopes article titled Is TV Frog a Legitimate Alternative to Cable?

In short, they found that TV Frog appears to be a legitimate device, but emphasized that “does not enable users to watch cable television for free, whether legally or illegally, as it merely provides an internet connection to any given television set.”

This means that, in order to watch legal content from third-party services, you’ll need to pay extra or sign up for a subscription (depending on the specific service).

From a company perspective, TV Frog is brought to you by Strong Current Enterprises Ltd., based out of London and in business since 2010.

Despite their time in business, the only other product Strong Current had brought to market at the time of our research was HDZoom 360 (also sometimes referred to as HD 360X Zoom), although it also didn’t feature any customer reviews, either.

Lack of feedback aside, how does TV Frog stack up against the competition?

Remember, as the Snopes article above mentions, TV Frog simply provides an internet connection to any television set, while also providing a graphical interface that can be used to view content. In other words, it’s a media streaming device.

But, there are a whole lot of streaming devices competing in the same marketplace as TV Frog, including behemoths like AppleTV, Roku Premiere, Google Chromecast, and Amazon Fire TV. Does it fare well?

In addition to these options, there are perhaps thousands of other generic Android-based streaming devices from third-party companies.

In fact, if you enter the phrase “Quad-Core Cortex A7, 2.4GHZ” into your favorite search engine, you’ll encounter several streaming devices that make many of the same claims as TV Frog, some of which were available for as little as $40 at the time of our research.

Comparatively, while these Android options might move your television into the online realm, they typically feature less robust functionality than some of the mainstream competition above (i.e. not as many popular apps available).

Perhaps TV Frog’s biggest advantage is that it offers a built-in browser, although the fact that you’ll have to use a mouse means you’ll have to be sitting next to a flat surface (versus in the middle of your couch under a blanket, for example). It’s also positive that the device features four USB ports, although 25% of these will be taken up by the mouse’s Bluetooth receiver.

TV Frog’s 4K output capability could certainly appeal to movie buffs, but it’s important to keep in mind that the content you’re viewing must be transmitted in 4K, and your TV must be able to display 4K.

In short, don’t think that TV Frog will magically turn the picture quality on a circa-2001 TV set into something you’d expect on something like the Samsung QLED TV.

Let’s carry these thoughts over to the next section as we come to an educated conclusion about TV Frog.

Our Final Thoughts About TV Frog

If you’re simply looking to move your TV into the 21st century and connect it to the Internet, based on what we learned from the device’s website (we didn’t test it firsthand), it seems like TV Frog is a legitimate product that might get you there.

And with its wide variety of inputs, it seems like it could also act as a central hub for connecting a handful of other devices and media (although it might not represent the most elegant option).

In the end, though, we don’t think the most important question related to TV Frog is one of legitimacy; it’s one of value.

In other words, if you’re only interested in gaining online access through your TV, and then using it to stream different media directly, there are dozens of valid options from mainstream manufacturers that can be purchased for less than $50. Which, as consumers ourselves, might deliver more value than TV Frog.

On top of this, these mainstream options will typically support a broader range of content services, which might be important if you’re looking to add a Netflix, HULU Plus, etc. subscription at some point in the future. They’re also typically backed by trained support staff who can get you back up and running quickly if something goes wrong.

Finally, many of these mainstream devices come with solid refund policies and warranties, neither of which seem to be provided by Strong Current Enterprises. As such, make absolutely sure you want to purchase TV Frog before pressing the order button.

Write a Review for TV Frog!