Zevo manufactures a line of instant action, bio-selective sprays that use essential oils to target nervous system receptors only active in insects, which quickly paralyze and kill them on contact. They also offer a Flying Insect trap that can kill insects for up to a month and a half.

Because of these mechanisms of action, the company advertises their revolutionary products are safe for use around people and pets, and their sprays—all of which feature precision triggers that allow you to spray from a distance accurately—are effective for both indoor and outdoor use.

Zevo’s insect sprays and traps certainly come with competitive prices, but will they deliver on their advertising promises? Let’s start by zooming in and examining their product lineup.

There are currently four Insect Spray formulas in the Zevo lineup, all of which promise to quickly paralyze and kill insects without the use of imiprothrin, cypermethrin, pyrethroids, butane, or propane:

Formulated to exterminate wasps (including their nests), hornets, yellow jackets, and other stinging insects.

Pro tip: You’ll notice that except for cinnamon oil, Zevo’s Stinging and Crawling spray formulas are the same.

This system features a plug-in base that uses two blue and UV LEDs (for a total of four) to attract insects like houseflies, fruit and drain flies, mosquitoes, midges, moths, gnats, fleas, and flying roaches toward a strong adhesive pad. Once stuck, it holds them in place until they dehydrate and die.

This pad is attached to a plastic shell-shaped cartridge with discreet openings, and the Insect Trap can’t be operated without one in place. After about 45 days (or when it’s full), you’ll simply pop out the old cartridge, replace it with a fresh one, and plug the device back into an outlet. 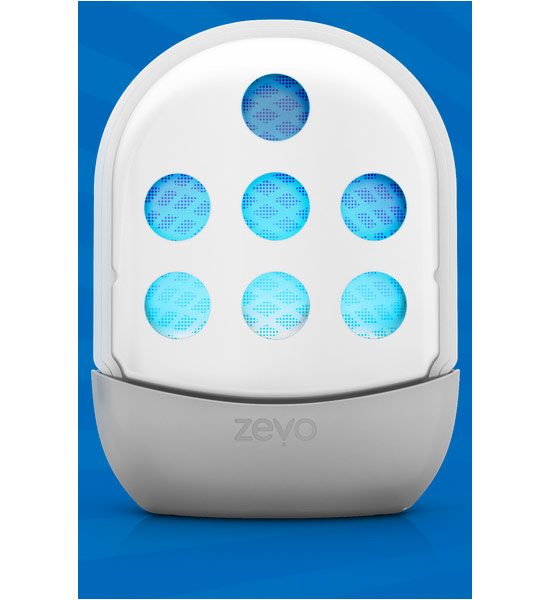 Could the Ingredients in Zevo’s Insect Sprays Cause Side Effects?

With this in mind, the Zevo website explains that since their Instant Action Sprays are comprised of “naturally occurring compounds found in a wide variety of fruits, vegetables, and spices,” they’re considered safe around people and other mammals like dogs, hamsters, guinea pigs, ferrets, and rabbits.

They emphasize their sprays shouldn’t be used around fish, birds, or reptiles. You should also never apply them directly to your skin, to pet’s fur, or to plants or soil.

How Much Does Zevo Cost and Where Can You Buy?

If purchased from Zevo’s main website, customers will pay:

On the other hand, ZevoOffer.com offered only the Crawling Insect and Flying Insect formulas, which were priced at:

All direct orders come with free shipping, as well as a 30-day refund policy, less S&H. Note: Their terms emphasize they “cannot accept items back that have been opened or used unless the item was received by you in a damaged or defective condition.”

We also found several of Zevo’s products sold on HomeDepot.com (as well as in-store) for about the same prices. Third-party refund policies may vary.

What Can We Learn from Zevo Online Customer Reviews?

On Home Depot’s website, we encountered 80+ customer reviews for Zevo’s Flying Insect Trap, who had given it an average rating of about 2.3 stars. There, most compliments seemed to reference ease of use and effective results, while complaints frequently revolved around less-than-stellar results and high prices.

Comparatively, Zevo’s sprays, traps, and bundles came with meaningfully higher 4.5-star average ratings on the brand’s website. Compliments and (the relatively few) complaints were similar to those found elsewhere online for their traps.

Most customers also reported good results with the company’s different spray formulations, although the relatively few complaints often cited less-than-stellar smell, and indicated that they tend to leave behind an oily residue.

Zevo vs. the Competition: Are Natural Insecticides Effective?

There are many theories as to why insects as a whole are drawn toward UV light. Despite this incomplete understanding, there are perhaps hundreds of different products available in all shapes, sizes, and designs that take advantage of this attraction by combining UV lights with sticky surfaces and/or dehydrating fans to kill insects, without the use of chemicals.

However, limiting our options only to wall-mounted plug-in devices in direct competition to Zevo, we found significantly fewer. These included the:

Given their similar functionality and price points, choosing the best option might largely come down to your budget—not just initial price, but the cost of replacing boards and bulbs (when applicable).

When it comes to sprays, the Texas A&M AgriLife Extension explains there are several effective plant-based insecticides used on a commercial basis—including pyrethrins, sabadilla, nicotine, Linalool, and neem—that are very low on the toxicity scale for mammals. Often, they work by shutting down the insect's nervous system or other important bodily functions.

However, they emphasize “products containing these active ingredients must be registered for use by the Environmental Protection Agency (EPA) and used in accordance with the provisions of the Federal Insecticide, Fungicide, and Rodenticide Act (FIFRA).”

The Consumer Reports article cited earlier, though, points out that because the FDA doesn’t consider botanical ingredients like those found in natural sprays such as Zevo as serious safety risks, they’re not “required to prove to federal regulators that they actually work. And CR's testing has repeatedly found that they don’t work well.”

Still, we found many competing botanical sprays, most of which ranged in price between $10 and $20, putting Zevo’s options at the lower end of the price spectrum. Does this necessarily mean you should give them a try?

Zevo’s lineup is brought to us by Procter & Gamble, a company that’s been in business since 1837, manufactures thousands of products, and held an A+ rating with the Better Business Bureau, as of 7/17/18. They also stand behind Zevo with a 30-day refund policy and their products seemed to come with mostly positive online customer feedback.

Just keep in mind that as soon as you try any of them, you won’t be able to process a refund through the manufacturer.

Considering you can potentially have their products in your hand faster by shopping at a local Home Depot, as well as return it there if it doesn’t meet your needs after testing, it might make logical sense to go this route. This could also save return S&H charges back to the manufacturer.

Write a Review for Zevo!