Molekule Review: Is This Air Purifier Worth It?

If you’re familiar with traditional air cleaners, you know they work by filtering particulate matter out of the air.

But according to the folks over at Molekule, they’ve created the world’s first molecular air purifier that doesn’t just capture pollutants, it eliminates them—including allergens, airborne chemicals (VOCs), mold, viruses, and bacteria.

Not only this, but Molekule is also portable, much quieter, and can be monitored and controlled via its companion app.

In a nutshell, here’s how it works (we’ll go into more detail in a second): Molecule’s intake pulls in 360° of air. As this air passes over a patent-pending light-activated nano-filter, any harmful pollutants not caught by the prefilter are turned into harmless elements at the molecular level. Then, this sanitized air exits Molekule into the surrounding room.

Although Molekule claims their technology is based on 20 years of research and development, does this necessarily mean that the purifier will work better than traditional options? Even then, will it deliver a solid level of value?

To begin our review, let’s take a look at Molekule’s finer details.

How Does Molekule Air Purifier Work?

Made from machined aluminum, each Molekule air purifier is 23" H x 8.25" in diameter and weighs 18 pounds. On its top, you’ll find a natural leather handle that allows you to move the purifier wherever it’s needed.

Speaking of which, the manufacturer recommends using one Molekule per 600 square feet, and placing it in areas where you spend most of your time, especially close to your bedside at night. This way, it can help you wake up feeling refreshed.

When in use, Molekule features three operation modes: 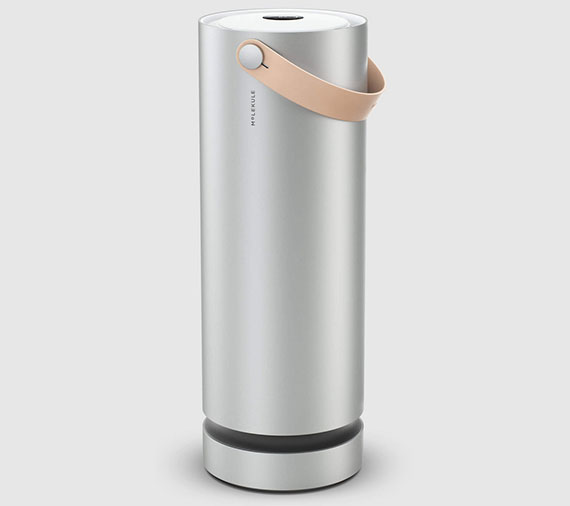 Each of these settings can be adjusted directly via Molekule’s touchscreen display. Or, using your home’s Wi-Fi connection, it can connect to the companion app, which can report metrics for each cleaning cycle, allow you to select the operation modes above, and display the remaining life for both filters. Built-in sensors will also order new filters as needed, which will arrive directly on your doorstep.

We’re even told Molekule’s app will, over time, “increase in intelligence to report surrounding air quality metrics (both indoors and outdoors).”

Most air purifiers work using HEPA filters to trap 99.97 percent of airborne particles 0.3 micrometers (µm) in diameter (several hundred times smaller than the thickness of a human hair), depending on the filter’s size and quality. However, this process only traps particulate matter; it doesn’t eliminate it.

Comparatively, Molekule uses a proprietary technology called PECO (Photo Electrochemical Oxidation) to disassemble pollutants at the molecular level and convert them into nontoxic elements—without creating ozone. We're told this technology was developed over the course of two decades, and that it's able to destroy pollutants 1,000 times smaller than HEPA filters (0.1 nanometers), including VOCs and viruses.

According to the company, this means that Molekule is the “only product that eradicates the full spectrum of indoor air pollutants.” Here’s how they explain it:

“This is done by creating a catalytic reaction that happens when a nanoparticle-coated filter is activated by light. Pollutants are broken down into their most basic molecular components, making them safe for us to breathe.”

The process works through four steps: 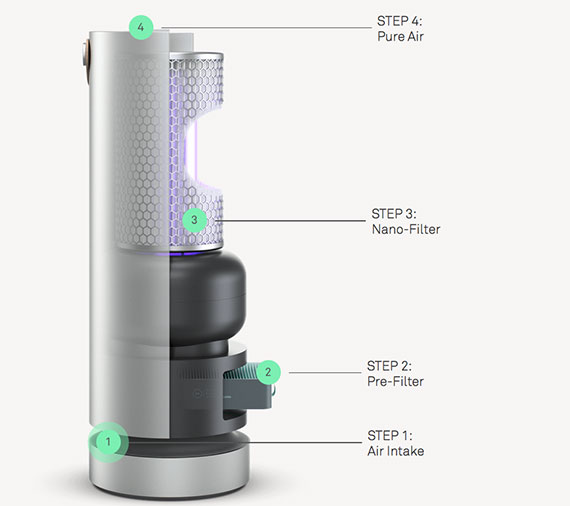 Together, the company advertises this four-stage purification process will eradicate the full spectrum of indoor air pollutants.

The manufacturer also reports that Molekule has been extensively tested by third-party laboratories, including the University of Minnesota and the University of South Florida, some of which have been shown to completely eliminate 3.9 million E. Coli in a single pass. A few white papers supporting these claims are listed on the Molekule website, and we were also able to dig up a PECO technology review elsewhere online.

How Much Does Molekule Cost?

If you prefer to buy individually, a single pre-filter is $30, which should be replaced every three months. One nano filter is $85 and should be changed out every six months.

Direct purchases delivered within the contiguous U.S. come with a flat $29 shipping fee, while deliveries to Alaska, Hawaii, Puerto Rico, and the U.S. Virgin Islands are charged $40 S&H.

For qualified customers, Affirm offers financing for as low as zero percent APR.

All Molekule purchases come with a 60-day refund policy, less S&H charges, as well as a one-year limited warranty.

A Look at Reviews and Complaints About Molekule

The relatively few complaints frequently related to functionality and service concerns, although a company representative responded to each.

As a company, Molekule, Inc. was founded in 2014 and is based out of San Francisco, CA. They held a C+ rating with the Better Business Bureau, based on one negative customer review and five closed complaints, as of 4/30/18. No additional details were available.

Who Invented the Molekule Air Purifier?

The PECO technology behind Molekule was originally invented by Dr. Yogi Goswami, a Professor of Chemical Engineering at the University of South Florida, using principles of solar technology, light, and nanotechnology—along with two decades of research, patents, and publication.

Today, Dr. Goswami’s son, Dilip Goswami, has taken this technology and "enlisted some of the brightest minds in applied science, engineering, and design" to implement it into Molekule, a device the company believes can help millions of people breathe better.

Because of this, the company is on a mission to “eliminate indoor air pollution, in every home, for everyone,” and to adapt the technology behind Molekule for use in businesses, hospitals, airplanes, and in many other potential applications.

Our Bottom Line: Who Is Molekule Good For?

Whether you’re searching online or at a brick-and-mortar retailer near you, the fact of the matter is that you can typically pick up a high-quality HEPA-based air purifier for anywhere between $100 and $200—which is up to 80 percent less expensive than Molekule.

However, as we often say here at HighYa, the price is only one factor in determining the overall value. The second part of the equation is how much use you'll get out of Molekule, as well as the potential health benefits it can provide.

Here are a couple of admittedly simplistic examples to outline what we mean:

Are you just looking for something to remove dust and other larger particulate matter from the air inside your home or office? An option that might be able to deliver the most bang for your buck? In an instance like this, it might be difficult to go wrong with a traditional air purifier.

On the other hand, do you have allergy sufferers in your home? Are you looking to get rid of the most allergens possible—including airborne chemicals, viruses, and bacteria? Because Molekule's PECO technology can destroy matter hundreds of times smaller than a HEPA filter, its high price might be worth the much-improved performance.

Write a Review for Molekule!