Do you love milk, but can’t stand the way it makes you feel afterward? If so, according to the a2 Milk Company, you might have difficulty digesting the A1 protein found in the majority of commercially produced milk.

To help you enjoy milk again, a2 Milk promises to use only cows that produce the A2 protein, delivering “milk that’s naturally easy to digest” and that “feels better.”

Maybe you stopped drinking milk years ago. Perhaps you even thought you were lactose intolerant at one point. But is there any clinical evidence supporting this whole A1/A2 protein thing? If so, can you expect a2 Milk to deliver on its promises?

We’ll break down everything we learned during our research in order to help you make a more informed purchase.

How a2 Milk Works

According to a video on the a2 Milk Company website, 30% of the protein in cow’s milk is comprised of beta-casein, which can be categorized as either A1 or A2. What’s the difference?

It all comes down to one amino acid at position 67 on the protein chain (see below for a visual representation of this). Here, you can see that A2’s structure is closer to human milk than to A1, which the manufacturer claims is often responsible for the digestion problems related to most commercial cow’s milk. 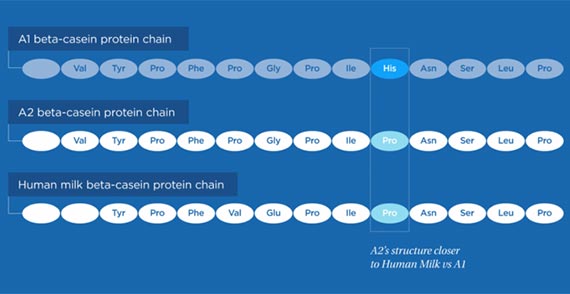 Here, we can see that an A! beta-casein protein chain is more similar to a human’s than A1. As a result, a2 Milk claims to help prevent digestion-related issues. Image credit: a2 Milk Company

How, exactly, does this different amino acid affect digestion? Once A1 beta-casein protein reaches the small intestine, BCM-7 (beta-casomorphin7) is produced, which is a peptide that acts as a histamine releaser. Because of, after BCM-7 has been absorbed into the system, is can irritate, inflame, and cause digestion issues.

There has even been some research (more about this in a second) showing a possible correlation between the A1 protein and much more serious conditions, such as autism, schizophrenia, slow muscle tone and psychomotor skill development in children, and more.

On the other hand, we’re told that A2 beta-casein doesn’t produce BCM-7, helping to prevent many of these related problems. Which is why the a2 Milk Company only sources milk from dairies with A2-only cows, which are highest among breeds like Jersey, Guernsey, and the Normande.

In addition, a2 promises their milk is also free of growth hormones, rBST, antibiotics, artificial ingredients, and additives.

What does the scientific community have to say about these claims?

Is There Clinical Support for the A1 vs. A2 Hypothesis?

This A1 vs. A2 hypothesis has been hotly debated in New Zealand, Australia, and Europe for years, although it’s more recent news on US shores.

In a nutshell, there hasn’t been a whole lot of clinical research, although the European Journal of Clinical Nutrition published a summary in 2004 claiming that “there is no convincing or even probable evidence that the A1-casein of cow milk has any adverse effect in humans.”

A Food Safety News article takes a more measured approach when stating: “Through the years, some studies extolling A2 milk have been refuted, and the general agreement is that some have been inconclusive and more research needs to be done. Interest in the topic continues to drive research.”

Interestingly, according to a 2014 Mother Jones article, the A2 corporation holds a patent for the only genetic test that can distinguish A1 and A1 cows. Also, “in 2004, the same year that A2 Corp. went public on the New Zealand Stock Exchange, Australia's Queensland Health Department fined its marketers $15,000 for making false and misleading claims about the health benefits of its milk.”

Bottom line? Until peer reviewed clinical evidence emerges that clearly settles this A1 vs. A2 issue for good, it’s sure to continue being a topic for heated debate.

In the mean time, is it worth spending you hard-earned money on a2 Milk, or are there better options? Before getting there, let’s quickly discuss lactose intolerance.

According to a disclaimer on their website, “a2 Milk is not suitable for anyone medically diagnosed with lactose intolerance, galactosaemia or cows’ milk allergy.” But why?

Lactose intolerance is caused by an insufficient amount of lactase in your small intestine. As you might have guessed, lactase is the primary enzyme responsible for digesting lactose, the primary sugar in most dairy products, leading to poor digestion.

On the other hand, the digestive irritation a2 Milk promises to address is caused by a protein. In fact, the company claims that these two conditions can exhibit similar symptoms, leading about 25% of the population into believing that they’re lactose intolerant, while only about 5% of the population is medically diagnosed as such.

Alright! That’s enough science-y talk for one day. Next, let’s find out how much you’ll pay for a carton of a2 Milk.

How Much Does A2 Milk Cost?

We’ll talk more about the company next, but a2 Milk was previously sold in the US from 2003-2007, although the company claims it didn’t catch on, so its market presence was pulled.

Today, however, you’ll find a2 Milk primarily sold at Safeway and Sprouts locations. No prices are listed anywhere online, but our local Safeway was selling cartons for $3.99, while Sprouts priced their a2 Milk at $3.69 at the time of our research.

Now, let’s talk more about the person behind the company.

Who Founded the A2 Milk Company?

Although their US base is in Boulder, CO, the a2 Milk company was founded in 2000 by New Zealander Dr. Corran McLachlan.

Prior to founding the company, Dr. McLachlan earned his degree in Chemical Engineering from Canterbury University, and then went on to earn his PhD from Cambridge University in England. It wasn’t until 1994 though, that Dr. McLachlan began researching milk consumption, which eventually led him to potentially discover a link between the A1 protein and certain health concerns.

Over the course of his career, Dr. McLachlan authored 29 scientific papers and developed 11 different patents.

Should You Buy a Carton of a2 Milk?

Ultimately, whether or not you’ll find value in what the a2 Milk Company has to offer depends on many personal variables we simply can’t know about. But even in a worst-case scenario, you won’t be out more than a few dollars if you’re not satisfied.

But before you head to your local grocery store, keep in mind that having problems digesting milk can stem from many different causes. This includes not just the lactose intolerance and A1 protein we’ve already discussed, but also legitimate milk allergies—even a completely separate (but similar sounding) diagnosis called cow’s milk protein intolerance.

What’s the point? Just because you’re having problems digesting milk, until you figure out what’s causing the underlying issue (with the help of your doctor, of course), you might have to try several different products to find one—if any—that works.

In the mean time, a2 Milk certainly seems like a legitimate company who believes that their product can comfortably help you enjoy milk again.

Did a2 Milk help you find relief from digestion problems? Would you recommend it to others? Tell us your story by writing a review below!

Write a Review for a2 Milk!