BPH can affect up to 50% of men over the age of 50. The associated urinary symptoms develop as the prostate gland enlarges and compresses your urethra, the duct that transports urine out of the body from the bladder.

ProstaGenix says their supplement’s mix of ingredients will reduce the effects of an enlarged prostate, also known as benign prostate hyperplasia.

By taking pills, the company alleges that you will:

ProstaGenix is based in Hollywood and is relatively well-known because of its lengthy TV commercials featuring famed interviewer Larry King.

This review examines the supplement's ingredients and safety to determine if it can work as advertised.

Each capsule of ProstaGenix contains eight different elements and vitamins as well as a pair of blends: one contains sterol and one contains polyphenols.

While each ingredient may provide a health benefit, the company focuses on sterols, which are plant-based fats that ProstaGenix says have the most significant impact on reducing your prostate-related symptoms.

This is because sterol, according to John Satino, the former research coordinator for Merck Pharmaceutical’s 1989 of BPH drug finasteride, makes the urinary track slicker so that it’s easier for urine to flow out of the bladder and past the prostate.

ProstaGenix says that their prostate supplement contains more beta-sitosterol and more sterols, in general, than 157 other supplements on the market.

We contacted the laboratory at which ProstaGenix conducted their studies to verify the results but did not receive a response at the time of publishing.

For now, we’ll provide a list of the supplement’s other ingredients along with their dosages:

In addition to PostaGenix's purported actions of their sterol ingredients, there are a couple of the other ingredients that have been specifically tested in those with BPH which may also offer relief.

ConsumerLab.com notes that there are two studies from the ’90s that support the notion that beta-sitosterol can improve urine flow.

One of those studies, published in The Lance in 1995, indicated that men with BPH who took 60 mg per day of beta-sitosterol saw noticeable results.

“Significant improvement in symptoms and urinary flow parameters show the effectiveness of beta-sitosterol in the treatment of benign prostatic hyperplasia,” the study concluded.

Additionally, the study noted that the prostate sizes in the men taking the beta-sitosterol did not shrink.

The study was a randomized, placebo-controlled, double-blind study, which is the highest standard when it comes to research. It means the men in the study had no idea if they were taking the placebo (fake pill) or beta-sitosterol.

Another randomized, double-blind, placebo-controlled study found that men who took 130 mg of beta-sitosterol per day had better flow, less leftover urine in their bladders and overall better quality of life.

The Linus Pauling Institute referred to these two studies in their analysis of beta-sitosterol's effect on urinary symptoms of BPH. While they noted that the studies show success, they tempered their conclusions.

In 2000, a review of 4 randomized trials conclude that beta-sitosterol safely and effectively improve urinary symptoms in those with mild to moderate BPH.

They also stated that beta-sitosterol may be especially useful in those with a higher risk for adverse effects and complications related to medical or surgical management of their BPH.

In 2012, researches provided an overview of BPH treatment with dietary supplements as the 2000 study represented the last time this information was updated. They corroborated the 2000 report, finding beta-sitosterol to be effective and associated with “mild and infrequent adverse events”.

“Although the results of a few clinical trials suggest that relatively low doses of phytosterols can improve lower urinary tract symptoms related to BPH, further research is needed to confirm these findings,” the site says.

Based on these studies, we’d say there is evidence that beta-sitosterol could help reduce the urinary symptoms of BPH. However, keep in mind the studies to support this conclusion are minimal and, in most cases, more than 20 years old.

Vitamin D is another ProstaGenix ingredient that has been studied in relation to BPH.

In fact, in 322 men, those with vitamin D deficiency also had a larger prostate volume, higher scores in a blood test used to screen for prostate issues, and a lower urinary flow.

In addition to being used as a potential sign of BPH, vitamin D may offer relief as well. Doses at 6000 IU/day can decrease prostate volume in those with BPH, according to this review.

Lastly, the polyphenol blend ingredient, quercetin, has also been studied as a potential BPH treatment option.

In 30 men with chronic pelvic pain, those treated with quercetin 500mg twice daily experienced significant pain improvement and also noted enhanced urinary flow. This hinted at a possible benefit for those with BPH.

In 200 men with BPH, those treated with 40 drops of quercetin daily experienced improved urinary flow rates when compared to placebo at 3-months.

The main side effects you may see come from the supplement’s beta-sitosterol. you may experience diarrhea, nausea, indigestion and other gastrointestinal issues.

A favorable safety profile can be valuable as medical treatment for BPH with alpha blockers may result in drowsiness, dizziness, or unsafe drops in blood pressure.

Though beta-sitosterol is rarely associated with side effects, the doses included in ProstaGenix are much larger than those used in the studies we reviewed.

Vitamin D was safe in doses more than 10x of what is offered in this supplement, while quercetin was safe at more than 3x the dose or ProstaGenix’s total polyphenol blend dose.

Nonetheless, your urinary symptoms may be caused by an underlying medical condition that should be managed by a medical professional.

Prior to starting a new supplement, discuss your symptoms with a physician to determine the best plan of action.

At the time of publishing, you could buy one, three or five bottles of Prostagenix from the company’s website (free shipping):

The company offers a 100% money-back guarantee through which they’ll give you a refund in the first 90 days after your purchase. 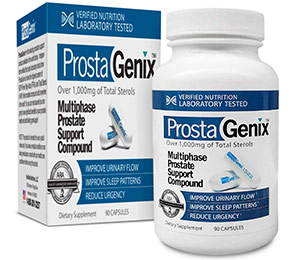 The Bottom Line: Is Prostagenix Worth It?

Studies that employ the randomized placebo-controlled double-blind research techniques say there is some merit to ProstaGenix’s claims. Namely, that it could help reduce your urgency to urinate as well as your frequency.

These effects are likely related to the large dose of beta-sitosterol, though vitamin D and quercetin may have supporting roles.

At the same time, there is one video on the site that indicates the supplement can reduce the size of your prostate. We found no research to back this up.

The downside to the supplement is that it, like any supplement, is not guaranteed to work. We saw enough negative reviews on Amazon to know that the claims ProstaGenix makes aren’t promises.

Second, the supplement’s price is expensive compared to other products like it. ProstaGenix says their sterols are of the highest quality, sourced from trees on the French coast.

While they could make a case their ingredients are better so their prices are higher, we found no scientific evidence that indicates sterols of certain origins are more effective.

And, finally, ProstaGenix doesn’t claim to eliminate your BPH symptoms. Rather, it says it can improve them, which is backed up by only limited research.

You could consider popular prescription drugs designed to open your bladder neck to make urination easier: Flomax and its generic counterpart tamsulosin. These drugs are FDA-approved, meaning they have reliable studies to back up their efficacy.

Furthermore, Medicare Part D and Medicare Advantage members could pay between $0 and $18 for a monthly supply of tamsulosin. This is far more affordable than what ProstaGenix charges.

However, Flomax and tamsulosin carry with them the possible side effects of ejaculation issues and diminished sex drive.

For those with BPH wishing to avoid medical or surgical management, or at higher risk with these options, sterol-containing dietary supplements may offer a reasonable option.

Nonetheless, your urinary symptoms should be discussed with a physician to identify the underlying cause before you start taking any supplements. You can then work together to determine the best course of management.

Write a Review for ProstaGenix!