The FixMeStick is a bootable USB device that can quickly scan your computer, identify any viruses or malware, and then effectively remove them. Despite its power, it‘s simple for any user to install, ready to go right out of the box, and works over four steps:

Compared to other anti-virus solutions, FixMeStick contains its own Linux-based operating system and works while your computer’s sleeping, so viruses already on your PC can’t actively hide their presence or resist their removal, since they’re not actively running.

You’ve got to admit that FixMeStick sounds appealing, especially if you’re not exactly a computer whiz. But there are a lot of scams in this industry, so is FixMeStick among them, or is it the real deal?

Let’s answer all your most important questions by starting with some background information.

Wikipedia provides a concise definition of a computer virus:

“A computer virus is a malware program that, when executed, replicates by inserting copies of itself (possibly modified) into other computer programs, data files, or the boot sector of the hard drive; when this replication succeeds, the affected areas are then said to be "infected”. Viruses often perform some type of harmful activity on infected hosts, such as stealing hard disk space or CPU time, accessing private information, corrupting data, displaying political or humorous messages on the user's screen, spamming their contacts, logging their keystrokes, or even rendering the computer useless.”

In layman’s terms, once your computer is infected by malicious software, it could run poorly and even hand your personal and financial information over to would-be scammers. But how can antivirus software help protect against viruses, and how does FixMeStick set itself apart from the competition?

How Anti-Virus Software Works: FixMeStick vs. the Competition

How Do Most Anti-Virus Software Works? Just like any other type of computer program, each piece of anti-virus software will work a little differently and implement a variety of features.

But according to How To Geek, in general, anti-virus software runs in the background (you’re usually not aware that it’s doing its thing) and scans every file you open. When you do this, it quickly compares the program to “known viruses, worms, and other types of malware,” and then alerts you as soon as a threat is detected.

In addition to comparing files individually, most anti-virus software can also perform full-system scans in order to detect threats that might otherwise remain for months (or even years, if it’s a program you rarely use).

Comparatively, the company advertises there are a couple of key distinctions with FixMeStick:

First, it leverages the power of 10 different antivirus programs at once: it’s built upon three leading antivirus programs (McAfee, Avira, and Sophos), and accesses seven other online programs when in use, to provide “the broadest and fastest response to the latest threats.”

Second, FixMeStick is a plug-in USB device that scans your computer before it boots, and before the infections start running, which they emphasize is the best approach, and one that the U.S. Computer Emergency Readiness Team recommends. Here’s another concise summary provided by Wikipedia:

“The best and most reliable method for operating-system-level rootkit detection is to shut down the computer suspected of infection, and then to check its storage by booting from an alternative trusted medium (e.g. a "rescue" CD-ROM or USB flash drive).[70] The technique is effective because a rootkit cannot actively hide its presence if it is not running.” 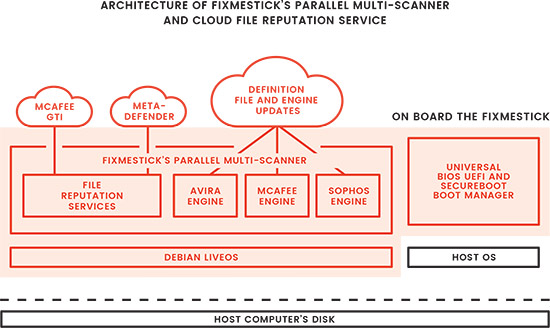 FixMeStick contains multiple scanners on the stick, and use more scanners in the cloud, which can help identify threats in advance. Credit: FixMeStick Technologies Inc

Is FixMeStick Just Another Registry Cleaner?

Whether you’ve been exploring different anti-virus solutions for a while, or just started researching all your options a couple weeks ago, you’ve probably encountered at least one scam disguised as a registry cleaner, which just ends up making your PC’s performance worse—or that installs more viruses and malware.

However, FixMeStick is not a registry cleaner—and we definitely don’t think it’s a scam. Why? Let’s take a look at a sampling of industry and customer feedback.

FixMeStick has thousands of professional and customer reviews available online, most of which appear to be positive.

For example, PC Mag gave FixMeStick a four-star (excellent) rating, and liked that the device is bootable, easy to use, features three different scanning engines, and gives you the ability to undo in case you run into any problems.

On Amazon, FixMeStick had more than 1,800 reviews customer reviews and a 3.7-star average rating. There, customers liked that it was easy to use, provided effective results, and that the product is backed up by great support. On the other hand, some found that FixMeStick didn’t work properly (whether it didn’t identify known viruses or malware, and/or didn’t effectively remove them), and didn’t improve PC performance.

FixMeStick also received high ratings on HSN.com (341 reviews, 4.3-star rating) and Walmart.com (139 reviews, 3.7-star rating), with many of the same compliments and complaints noted on Amazon.

The anti-virus software is manufactured by FixMeStick Technologies based out of Montreal, QC.

How much will FixMeStick’s software cost you?

How Much Does FixMeStick Cost & Where Can You Buy It?

Note: FixMeStick can also be found at a wide variety third-party retailers, such as Amazon, Walmart, Best Buy, Office Depot, HSN.com, and Fry’s Electronics. To find one near you, visit the company’s Store Locator page.

If purchased directly through the company, FixMeStick comes with a 45-day refund policy. And you don’t even have to ship it back to the company. You’ll also receive a virus removal guarantee, which states: “If your FixMeStick didn't remove your virus, let us know and we'll remove it manually for free.”

If needed, FixMeStick also comes with unlimited free email, phone, and chat support, which you can initiate by contacting customer service at support@fixmestick.com, or calling 888-530-6125.

We’ve covered a whole lot of ground already, so let’s go ahead and wrap things up.

Is FixMeStick a Good Anti-Virus Solution?

Remember the anti-virus article we mentioned at the beginning? Comparing FixMeStick to any of the free programs we discussed in it isn’t really fair. Why?

Because FixMeStick is intended to work in tandem with them—or any other anti-virus program. Kind of like of like how a hammer and a nail are two separate things, but generally work better when used together.

So, if you haven’t already, we’d recommend reading through the article and starting with some quality anti-virus software. However, if you are having a hard time cleaning an infected PC, based on their competitive pricing, length of time in business, ease of use and mostly positive online customer—and professional—feedback, you might consider adding the FixMeStick to your arsenal.

But keep in mind that if you’re technically-minded, you can download each of the anti-virus programs the include yourself, create your own bootable device (this is actually the case with most anti-virus vendors) for free, and accomplish much of the same thing.

Write a Review for FixMeStick!