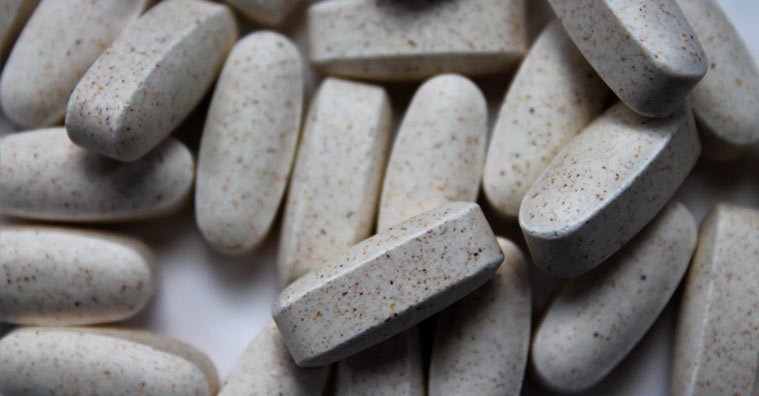 Many people who are looking to lose weight are opting to take fat or carb blockers, which are claimed to inhibit carbohydrates or fat from affecting the body the way they normally would.

This article takes a comprehensive look at carb and fat blockers, which are vastly different from each other, with experts discussing how they work, their overall effectiveness, potential side effects, and best candidates to take them, as well as healthier options to taking these supplements.

Keep in mind that this article is not intended as medical advice. Before you take a carb blocker or fat blocker, it’s important to talk to your medical provider, first.

Fat Blockers and Carb Blockers: What They Are and How They Work

Fat blockers are totally different from carb blockers, according to Robert Ferguson, a certified nutritionist, author, and speaker who is known as America’s Fat Loss Coach.

Carb blockers, also known as starch blockers or amylase inhibitors, are all interchangeable terms, according to Dr. Monica Flora, who is board certified in family medicine with a special interest in obesity medicine and works at Adventist Health Simi Valley.

“They act by blocking an enzyme in our saliva called amylase which breaks the food we eat into simple carbs,” Dr. Flora explained. “By doing this, the starches essentially pass through your digestive tract without being broken down and stored as fat.”

There are two types, she added: Those over-the-counter in supplement form and the other are prescriptions called alpha-glucosidase inhibitors.

Fat blockers, also known as lipase inhibitors, act by blocking the intestine’s ability to absorb some of the fat which we eat. “The fats that are not absorbed are passed through our bodies during bowel movements,” Dr. Flora said.

Both supplements are used by people who are trying to lose weight, Dr. Flora said.

“Usually when people have a BMI of greater than 30, we do recommend weight loss,” she noted, adding that these supplements can and should be used in addition to diet and exercise.

“In the medical world, we prescribe these medications – not the over-the-counter supplements – to our diabetic patients to help control blood sugars as well as manage weight.”

Although Dr. Flora uses the prescriptions for diabetic patients, when using over-the-counter supplements, “it is important for our diabetic patients to be seen and counseled regarding these as they can cause a drop in their blood sugar and may need a reduction in their prescribed medication dosages.”

She added that fat blockers should be avoided in patients with gallstones or liver injury, and diabetics need to be closely monitored, “also patients with mal-absorption syndromes should avoid these supplements.”

According to Dr. Flora, the benefits of carb blockers include the following:

She noted that carb blockers prevent only a portion of the carbohydrates ingested get absorbed.

“They work mainly on the enzyme and slow down the process by which the complex carbohydrates/starches get broken down,” Dr. Flora explained.

“If you eat a diet rich in sugar, those will not get broken down. Many of the studies discussing the efficacy of these are not of high quality and are therefore unreliable. There are some that show weight loss, which others show no change in weight.”

In the laboratory setting, white bean extract of Phaseolus vulgaris (also known as the common bean, green bean, and French bean) has been shown to inhibit the digestive enzyme alpha-amylase, which may prevent or delay the digestion of complex carbohydrates, potentially resulting in weight loss.

The potential for white kidney bean to block the absorption of carbohydrates has been studied in human subjects as well.

A 2011 study examined white kidney bean’s effect on weight loss and blood glucose levels. Researchers concluded that doses ranging from 500-3000mg were effective in reducing spikes in blood glucose that commonly occur after a meal, as well as promoting weight loss.

More recently, a review of 14 studies summarized the best available evidence for white kidney bean’s ability to promote weight loss and body fat reduction. In almost 700 subjects, researchers found that doses of at least 1200mg for a minimum of 1-month was associated with an average weight loss of 2.4lbs. This dosing regimen was also associated with 7lbs reductions in body fat.

More research is needed to determine if the effects of carb-blocking dietary supplements in the long-term. Also, it’s important to note that these products are not designed to replace the need for a healthy diet and regular exercise.

This review examined the effects of alpha-glucosidase inhibitors in diabetic patients. In their analysis of over 40 randomized trials, the researchers concluded that prescription carb blockers improved blood glucose regulation and a minor effect on reducing BMI.

Ferguson noted that there’s only one proven fat blocker that’s over-the-counter (OTC) and FDA-approved called Orlistat, which is also marketed as Alli and Xenical. With Orlistat, “it does block 25 percent of fat that people consume, that’s what the studies demonstrate.”

“The carb blocker is based on inhibiting the enzyme that breaks down the carbs you eat, so when they’re not broken down to make it into your blood, it passes through,” Ferguson explained. “But my problem with carb blockers and with fat blockers is the same: why would you want to block your body from doing what it’s naturally designed to do?”

Alli is the over-the-counter version of Orlistat, which Dr. Flora prescribes to patients, and is at half the dose of what it is in the prescription strength.

“Both of these are what I recommend if you decide to choose these to supplement your daily diet and exercise regimen,” said Dr. Flora, adding that she recommends following up with your physician to ensure that it is safe with your medical conditions and does not interact with your other medications.

“Other supplements can have fillers, so I recommend ensuring that what you buy is of the best quality,” she said.

In terms of research, the fat-blocking benefits of both prescription and OTC Orlistat have been investigated.

The combination of prescription orlistat, calorie restriction, and daily exercise over a 4-year span was superior to lifestyle changes. This amounted to roughly 3kg of weight loss during this time period, however.

Both carb and fat blockers are generally considered safe, according to Dr. Flora, however, this depends on your other medical issues and the medications you are taking. “It is always best to consult with your physician regarding if these supplements are the right choice for you.”

Both have been well tolerated in human subjects.

Carb blockers are generally safe, Dr. Flora noted, but they can lower your blood sugar. Also, they cause gastrointestinal issues such as bloating, abdominal cramping, and gassiness.

“With fat blockers, the common side effects are oily rectal leakage, increased bowel movements, abdominal pain, gassiness, and headaches,” Dr. Flora added. “If you take fat-soluble vitamins, you will need to take them in between meals so they can be absorbed adequately.”

A problem with carb blockers is that “people are gorging and binging on carbs, thinking they’ll be okay because they use a carb blocker,” said Ferguson, CEO of Diet Free Life. “And what they don’t realize is that the carb blockers are mostly effective with complex carbs. So if you’re eating simple carbs – sweets, candies, pies – they don’t tell you this, but the likelihood of anything being blocked is not going to happen.”

Also, the side effects are just not worth it, Ferguson emphasized, which can include gas and other gastrointestinal issues, sometimes increased bowel movements, oily stool, and oily discharge, “just for the likelihood of saving a few calories.”

It’s also important to know that both carb and fat blockers limit your caloric intake, as well as the nutrients your body absorbs. Long-term use may result in energy and nutrient deficiencies.

He does not recommend taking either and instead said to focus on education around nutrition. “If you ask people why you would take a carb blocker or fat blocker, it’s because someone has you believing that eating carbs or fat is bad.”

Effectiveness of Carb Blockers with the Keto Diet

The ketogenic diet involves eating lots of fat, moderate protein and very few if any carbohydrates, and can potentially force the body to become a fat-burning machine as it relies on fat and protein as its main source of fuel.

“If you want to mimic a low carb diet, then the keto diet is definitely the best option,” Dr. Flora said, adding that the carb blockers work better on people who have a large carbohydrate intake. “If you are on the keto diet, you are already ingesting a low carb diet and it may not be as effective.”

She added that the better alternative to taking a carb or fat blocker is maintaining a healthy lifestyle. “I personally recommend the Mediterranean diet since it is more of a lifestyle than a diet. It is easy to implement.”

Ferguson said a healthier option is to increase what he calls “your nutrition IQ,” and “learn how to eat based on improving your body composition. Once you measure and track your body fat percentage, everything you need to know will demonstrate itself as a result.”

Testing your body fat percentage is simple these days, with machines as easy to access as buying a scale.

Body fat percentage is much different than what is known as BMI – Body Mass Index – which was never meant to determine whether or not a person is overweight, over-fat, healthy, or obese. However, it is constantly acknowledged as the determining factor for health status, according to Ferguson, who is part of a movement to replace the BMI with the Body Fact Index – BFI.

In a study reported by the National Institute of Health, it was made clear that the BMI “has misclassified” the relationship between weight and health. In this study, approximately 36 to 43 percent of the people in this group of nearly 1,000 fell into the category of obese based on BMI, but according to DXA scan (dual-energy X-ray absorptiometry), 80 percent of these same people were indeed obese.

“Learn to eat in a way that’s going to help you improve your body fat percentage, which then improves overall health,” said Ferguson, adding that 70 percent of all breast cancer and 40 percent of all cancers are associated with excess fat.

Yet, “people are being misdiagnosed and misclassified with being healthy and being not healthy based on the BMI, which is flawed. And this is why body fat percentage, and tracking it, is the ultimate goal for everybody.”

For people who still want to try carb or fat blockers, Ferguson advises, number one, “consult with your physician.” And number two, know that “none of those things are an end-all deal – accept that reality.”

“No one’s going to disagree when we say that carb and fat blockers are not a silver bullet,” Ferguson added. “Unfortunately people are so uninformed of what would be the right way to do things that they just keep going from one promise to the next promise. And that cycle continues.”

Before you try a carb or fat blocker, the most important thing to remember is that these should be used as an addition to diet and exercise, Dr. Flora advised, adding “you should always consult with your physician before starting a diet or exercise regimen.”

Additionally, “these should be used as an addition to diet and exercise. You should always consult with your physician before starting a diet or exercise regimen,” Dr. Flora said.

Fat and Carb Blockers 101: What They Are, Do They Work, and Are They Safe?