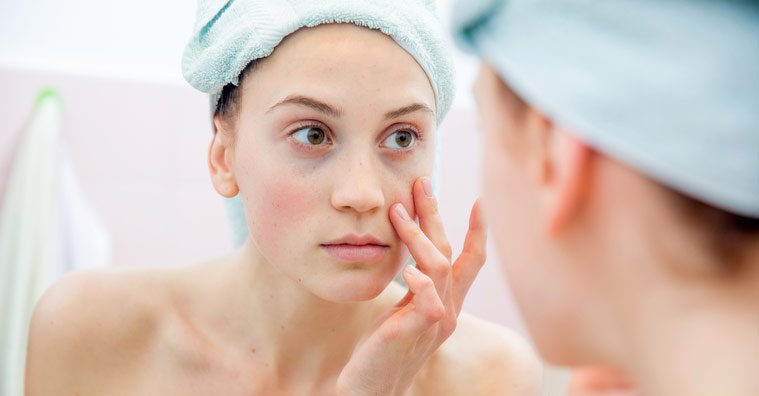 People in their 40s to 50s are the most common age group that starts to see dark circles under their eyes because that’s the typical age range when structural support of the face starts to weaken and stretch.

The good news is that there are several at-home treatments for dark under-eye circles, like using lemons and cucumbers and placing a cold spoon under your eyes to reduce swelling, which can improve the look.

You can also help prevent dark circles under your eyes from forming in the first place, or getting worse, through simple preventive measures, like reducing stress, getting enough rest and drinking plenty of water.

This article offers input from top experts, including two Medical Doctors who are board certified plastic surgeons, a board certified dermatologist who is a laser specialist, and an assistant professor of clinical dermatology at a world-renowned academic medical center.

What Causes Dark Circles Under the Eyes?

Mark D. Gaon, a Medical Doctor who is a board certified plastic surgeon at Finesse Plastic Surgery in Southern California, said there are multiple causes for dark under-eye circles. These causes include:

Depending on the source or reason for the dark circles, a person can be affected at any age, noted Gene Rubinstein, M.D., a board certified dermatologist and laser specialist at the Dermatology and Laser Centre of Studio City in Southern California, who noted the following factors can also contribute to dark circles under the eyes:

Genetics is a large component of dark under-eye circles in the young, according to Dr. Yuly Gorodisky, owner of the West Coast Plastic Surgery Center who is board-certified by the American Osteopathic Board of Surgery.

“Most patients who are concerned about them in their twenties usually have family members who have them as well,” Dr. Gorodisky said. “In older patients, it is usually gravity and aging that causes dark circles.”

Dr. Gorodisky noted there are two main components of dark circles under the eyes:

While some experts maintain that natural methods can help diminish the appearance of dark circles under the eyes, there are no natural remedies that are going to have a lasting effect, according to Dr. Temitayo Ogunleye, assistant professor of clinical dermatology at Penn Medicine, a world-renowned academic medical center.

“For people that get darkening from rubbing, for instance, if you have had years of chronically rubbing your eyes, that skin still won’t necessarily go back to your normal skin tone,” Dr. Ogunleye said.

That said, the following at-home treatments may help off-set the appearance of dark circles under the eyes. In some cases, dark under-eye circles can appear more pronounced if your eyes are puffy, so some of these treatments help alleviate puffiness.

Honey has antimicrobial and anti-inflammatory benefits, according to Dr. Gaon.

“Look for raw, locally sourced honey,” Dr. Gaon advised. “Simply dab a small amount under your eyes just before bed and allow it to soak in overnight.”

There is a science behind the use of cucumbers on the eyes for instant calm, according to Phillip Artemi of the Australasian College of Dermatologists, who noted that technically, cold temperature can cause blood vessels to constrict, so swelling is temporarily reduced, however, “it won't reverse dark circles around the eyes.”

“Sprinkle some turmeric in a bit of buttermilk and soak two large cotton balls in it,” he explained. “Squeeze out the fluid and place over your eyes for 15 minutes five times per week.”

Black, white or green tea contains antioxidants, as well as anti-inflammatory and soothing properties. It also contains caffeine, which can shrink the blood vessels and reduce fluid retention around the eyes.

Green tea is especially noted for containing an anti-inflammatory that removes fluid buildup under the eye.

Once you've brewed your tea, put the bags in the refrigerator and recycle them later in the day by placing the cold bags on your eyes.

“Once cooled, they help reduce end-of-day puffiness around the eyes,” Dr. Gaon said. “Apply one on each eye for 10 minutes and then discard the bags.”

If dark circles under your eyes are caused by too much pigment, Dr. Gaon recommends lightening your skin with either the juice of a potato or a fresh-squeezed tomato.

Potatoes are rich in vitamins A and C; they also contain fiber, phytochemicals and potassium, which are said to help detoxify the skin and improve blood circulation around the eyes.

Tomatoes contain astringent properties, as well as high levels of lycopene, which can help protect the skin against harmful UV rays.

“Soak a cotton ball in the juice, squeeze it out, and rest the cotton ball over your dark circles for 10 minutes,” Dr. Gaon advised.

According to Consumer Health Digest, lemon juice contains citric acid, which has been shown to possess skin lightening properties.

You can apply lemon juice directly to the skin under the eyes, or create a mask by adding olive oil and honey, and gently apply to the affected area.

Mint leaves contain the same vitamins and minerals as lemons do, only in much smaller amounts.

Consumer Health Digest recommends crushing the mint leaves, then placing them underneath your eyes for about 20 minutes. The mint leaves have a natural cooling effect, which can help diminish puffy eyes and improve blood circulation around the area.

Lower temperatures help shrink the blood vessels on any part of the body. Using a cold compress on your eyes can help diminish the appearance of dark circles, and also reduces swelling if your eyes are puffy.

Preparing a cold compress is simple. You can place a few ice cubes inside a washcloth, or wet a cloth with cold water. Place under your eyes for about 20 minutes, or as your comfort level allows.

Preventive Measures for Dark Circles Under the Eyes

Dr. Gaon gave the following advice to help prevent or diminish the appearance of dark circles under the eyes.

Dr. Gorodisky offered the following additional tips as preventive measures for dark circles under the eyes, which will help to keep the skin healthy and delay the laxity that’s associated with aging:

People who suffer from dark circles early in life often use numerous creams and other preparations to try to alleviate the problem, Dr. Rubinstein added.

However, some of those preparations occasionally have a negative reaction, which leads to temporary redness which the skin converts to even more pigmentation.

Before spending money on products that claim to cure dark circles under the eyes, it’s important to be realistic, Dr. Ogunleye advised, because some products are really expensive, but most things that say they take away your dark circles probably won’t.

So before spending hundreds of dollars, know that more likely than not, it’s not going to work.

There are some over-the-counter products that may offer temporary results – but the keyword is “temporary.”

“There are a lot of serums out there that might give you some temporary results, maybe a couple of hours of improvement,” Dr. Ogunleye said. “So it’s a matter of whether you feel your money is worth a couple of hours.”

Some over-the-counter under eye creams contain retinol, which has properties that can help even out the skin tone.

But with retinol, “you can get some dryness and irritation, so you have to be careful to make sure you’re using a moisturizer at the same time,” Dr. Ogunleye advised.

Dark circles under the eyes are difficult to treat, according to Dr. Ogunleye, who noted that there are things that can help their appearance, “but people who want their eyes to look like they did when they were 10 years old is not a realistic hope,” Dr. Ogunleye said.

Dr. Ogunleye suggests the use of concealer to help diminish the look of dark circles under the eyes because makeup concealer will give you the biggest bang for your dollar. She also highly suggests using sunscreen – 30 SPF or above – as a preventive measure.

“I recommend sunscreen for the entire face, including under the eyes, because any type of sun exposure can make skin areas darker,” Dr. Ogunleye said.

If you are prone to allergies, it is important to keep allergies under control because swelling and redness around the eyes is a common side effect of allergies, Dr. Rubinstein advised, because this may lead to the appearance of dark circles and inflammation that may lead to pigmentation.

It’s important to understand that dark under-eye circles are super common, Dr. Ogunleye added, and this appearance is usually not as bad as the person might think.

“Nine out of 10 people who think their under-eye circles are too dark – they’re not nearly as dark as they think, and other people really don’t notice,” Dr. Ogunleye said. “That’s why makeup is good. There’s great makeup out there that you can use to conceal all things.”

At-Home Treatments for Dark Circles Under Your Eye