CoolSculpting Review: Is It Worth It? A Detailed Look

CoolSculpting is an FDA-approved process for long-term fat reduction. This branded form of cryolipolysis (fat freezing) is considered to be a safe, nonsurgical alternative to liposuction and other fat-reducing procedures.

It’s officially cleared to treat nine parts of your body, including under the chin and jawline, along your thighs, abdomen, back, upper arms, and underneath the buttocks.

The technology works by freezing fat cells on your trouble spots so that they die and disappear, leaving you with up to 25% less fat in the treated area within two to six months of treatment.

This procedure is considered a safe and effective way for people who are close to their goal weight to shed excess body fat. According to the company website, cold temperatures don’t harm non-fat cells, so you don’t need to worry about damaging the rest of your body.

In this review, we examine the facts behind this procedure to help you determine if CoolSculpting is a suitable option for you.

The key to understanding CoolSculpting is to look closer at how the body’s fat cells work in the first place.

While the amount of fat cells in your bodies varies little between childhood and adolescence, these cells shrink or expand based on your lifestyle. Some people are genetically predisposed to having stubborn pockets of fat that don’t disappear despite dieting and exercising.

CoolSculpting claims to kill off some of these fat cells so that your body can eliminate them for good.

Most CoolSculpting appointments take place in designated clinics or plastic surgery offices. When you undergo the procedure, you’ll first have a clear gel applied to the treatment area to act as a barrier between the CoolSculpting apparatus and your skin.

An applicator is then positioned over the gel, which begins cooling down and sucking on your skin. Your CoolSculpting technician will gently move it across your treatment area to break up the fat cells.

While your appointment time varies based on what you’re treating, most will last between 30 minutes to three hours. Some people choose to have simultaneous treatments on multiple parts of their bodies with more than one CoolSculpting apparatus.

The procedure itself should be relatively uneventful, and many people use the time to read, make phone calls, or get work done online.

At the end of the session, you will receive a brief massage over the treatment area to break up the fat cells and speed up your body’s elimination process.

You might be left with temporary redness, swelling, and other signs of skin sensitivity. These side effects typically disappear quickly.

Beyond these symptoms, the CoolSculpting website states that there is no recovery time after the procedure and that you will be approved to resume normal activities immediately after.

You should start noticing improvements within three weeks of treatment, and it might take up to six months for the fat flushing process to finish.

As each treatment session can only remove up to 25% of fat cells at a time, you may need to undergo the procedure multiple times to achieve the results you want. This will usually be factored into your initial cost estimate.

CoolSculpting (and cryolipolysis more generally) has a high rate of success. This means that such treatments usually succeed in removing unwanted body fat after a few sessions.

Cosmetic surgery experts agree that the procedure has value. “CoolSculpting results in a permanent reduction in fat cells and even better, a noticeable reduction in the appearance of those hard to get rid of bulges,” says Dr. Jacob Steiger, a double-board certified plastic surgeon.

“It is not like any other fat removal or reduction procedures. It doesn’t burn, shatter, or extract any cells, and there are no knives, suction hoses, needles, or scars.”

However, it’s important to clarify that CoolSculpting isn’t a cure and cannot remove all fat. If you don’t exercise or follow a healthy diet, then CoolSculpting won’t help you restore your figure, and you’ll eventually lose any gains the treatment gave you.

Likewise, some people respond more positively to the treatment than others and experience more dramatic results.

It’s also worth noting that CoolSculpting can’t tighten your skin. This means your skin might look looser after treatment if it was previously stretched out around fatty tissue.

As CoolSculpting will only remove approximately 20% of the body fat around a given treatment area, it’s possible that the improvements might be too subtle for most people to notice.

Before and After Pictures

Ideal patients are those who are in good physical shape and health with extra fat pockets without too much skin laxity.

Below are photos that highlight some of the possible results. 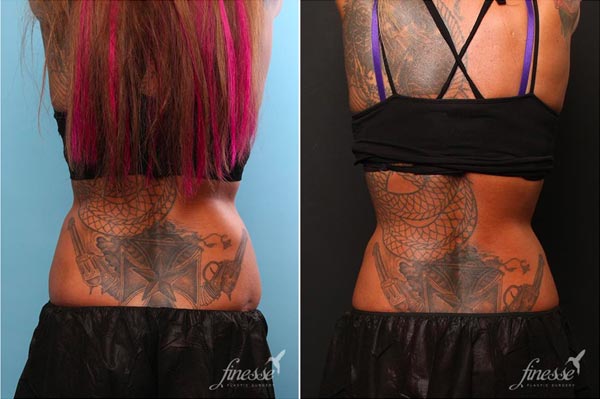 Before and after 8 weeks: Dr. Christie Prendergast’s patient who underwent a Coolsculpting treatment to flanks. 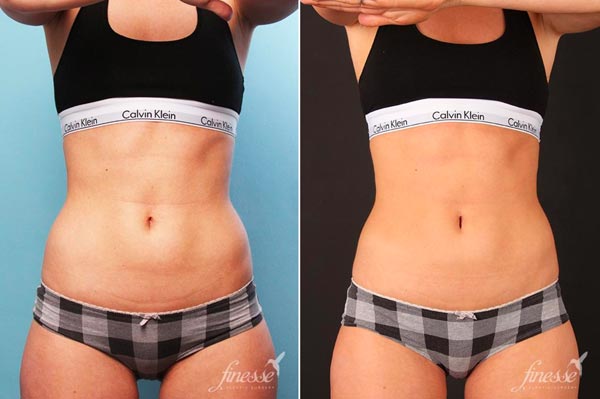 Patient treated at West Coast Plastic Surgery Center by Dr. Yuly Gorodisky. This image shows Coolsculpting of the abdomen, before and eight weeks after.

Before and after 8 weeks: Dr. Christie Prendergast’s patient who underwent a coolsculpting treatment to flanks.

The company makes it clear that CoolSculpting isn’t for everyone.

Those who have cryoglobulinemia, cold agglutinin disease, or paroxysmal cold hemoglobinuria aren’t candidates for it and that you must talk with your doctor beforehand if you have recently undergone surgery, have a pre-existing hernia, or have other known sensitivities or medical conditions that may interfere with it.

The procedure also isn’t possible for pregnant women, those with medical conditions that affect their ability to tolerate cold, and those who don’t have much fat to begin with.

The technology relies on the ability for the device to suction, so if there isn’t enough fat to grab onto, it’s not going to work.

Common side effects from CoolSculpting like swelling, bruising, red skin, and tenderness at the treatment site might be uncomfortable, but they aren’t considered dangerous. However, there are a few conditions to be concerned about.

“Be aware of paradoxical adipose hyperplasia,” says Dr. Jonathan Kaplan, a board-certified plastic surgeon at Pacific Heights Plastic Surgery. “This is a rare reaction where the fat cells swell after treatment, causing a bulge, and it requires liposuction to treat.”

Complications aren’t likely, as an analysis from the Aesthetic Surgery Journal reported that less than 1% of those treated had any complications whatsoever. These findings were confirmed in a study from Plastic and Reconstructive Surgery.

According to the official CoolSculpting website, what you’ll pay for treatment varies based on several factors, including where you live, what you’re having treated, the experience level of your clinic, and how many sessions you sign up for.

If you’re only treating one area at a time, your cost might stay around $600–$750 per session.

Part of your body that’s approximately the size of your palm counts as a different treatment area. If you want your thighs and upper arms treated, that’s considered at least four areas total.

Likewise, you should expect to undergo at least two treatment sessions for significant results, which can effectively double your costs.

Your provider might offer you a bulk discount if you treat multiple areas at once, so it’s worth attempting to negotiate the final price.

You can use this search tool to find local CoolSculpting treatment centers and do your own price comparisons.

Sixty plus HighYa readers have left reviews for CoolSculpting on our site, and these average 1.4 stars out of five. Only 8% of reviewers say they would recommend the company. Why such strong opinions? Here’s an analysis of what these customers are really saying.

When it comes to removing stubborn fat, CoolSculpting is just one available method. Two other popular methods include Ultherapy and liposuction.

Like CoolSculpting, Ultherapy is an FDA-cleared, noninvasive procedure for fine-tuning your appearance. However, this technique relies on ultrasound technology, and it’s used to tighten the skin around the face and neck, similar to a facelift.

The procedure takes about the same amount of time as CoolSculpting, both in-office and to see results after. However, Ultherapy is known to be painful, so many people take painkillers beforehand.

Expert opinions on the effectiveness of Ultherapy for lasting results are mixed, but we found that many people consider it to be an affordable alternative to traditional facelifts.

Liposuction is similar to CoolSculpting since the focus is removing unwanted fat pockets. Where it differs is that liposuction is a surgical procedure that both offers more dramatic results and carries higher risks of complications.

In fact, a review from Plastic and Reconstructive Surgery reports that 20% of liposuction patients experience minor complications, though less than 0.5% experience significant ones.

You may undergo local or general anesthesia during liposuction, and it takes longer to recover from the procedure. However, you should notice your results from liposuction immediately, and they tend to be more extreme.

While prices vary considerably, liposuction usually costs around $3,000–$4,000 per treatment region, compared to $600–$750 for CoolSculpting.

CoolSculpting fat freezing technique does works, but it might not impress.

The process of cryolipolysis is a proven effective way to damage fat cells so that your body expels them, and the procedure puts the rest of your body at minimal risk of complications.

Each treatment is quick, relatively painless, and requires no downtime, but that’s not to say there aren’t other downsides The biggest ones appear to be the cost, the subtly of the final results, and the lag time (up to six months) before they are visible.

If you’re interested in CoolsSculpting, keep these Do’s and Don’ts in mind for the best chance of success:

Write a Review for CoolSculpting!