Specifically, the website explains that you’ll be able to monitor which direction your glucose levels are headed and how fast they’re getting there, for up to 10 hours, without having to stop and prick your finger. In fact, it’s advertised as the first FDA approved device to “let you treat your diabetes without a confirmatory finger prick.”

Together with the fact that Dexcom is approved for use in children as young as two years of age, can help aid in the detection of hyperglycemia and hypoglycemia episodes, and can share your information with loved ones to help successfully manage your diabetes, the company tells us theirs is the best selling, most preferred CGM on the market.

There’s no doubt that diabetes management is all about tracking numbers, but can the data provided by Dexcom’s CGM deliver a more complete picture than the competition? That’s the central question we’ll help you answer here.

The Basics of Diabetes

The Centers for Disease Control and Prevention explains that our body breaks down most of the food we eat into glucose, a type of sugar, which is used to deliver the energy it needs. However, cells only allow glucose to pass through their walls—and therefore process it into energy—after the hormone insulin has attached to the appropriate receptors.

If there isn’t enough of this hormone present, or if the hormone doesn’t function properly, it can cause glucose to build up in the blood (known as blood sugar), leading to potential side effects like “heart disease, blindness, kidney failure, and lower-extremity amputations.”

Not all diabetes is the same, though. Type 1 diabetes requires the use of supplemental insulin, and is often the result of a combination of “autoimmune, genetic, and environmental factors.”

On the other hand, type 2 diabetes, which accounts for 90 to 95 percent of all cases, is not necessarily insulin dependent and can often be mitigated—or even reversed—through a combination of healthy food and exercise choices.

Although diabetes often doesn’t exhibit symptoms until an individual falls ill or experiences side effects, blood glucose tests can help your doctor diagnose the condition in advance. More recently, and as mentioned on the Dexcom website, A1C tests that measure hemoglobin levels can also be used, which report your glucose levels over the course of three months.

For most individuals with insulin-dependent diabetes, accurately monitoring their blood glucose levels involves pricking their finger, placing a drop of blood on a testing strip, and having their readings taken by a blood glucose meter anywhere between two and 10 times per day, depending on their doctor’s treatment plan.

Contrastly, the National Institutes of Health explains that a CGM “works through a tiny sensor inserted under your skin, usually on your belly or arm. The sensor measures your interstitial glucose level, which is the glucose found in the fluid between the cells. The sensor tests glucose every few minutes. A transmitter wirelessly sends the information to a monitor.”

This way, instead of waiting an hour or more between each blood glucose test, which will only provide a snapshot of your levels at any one time, CGMs like Dexcom can provide readings every five minutes, up to 288 times over a 24-hour period.

Together, CGMs have been shown to help provide active monitoring at night, reduce hypoglycemia, and decrease A1C an average of 1.3 percent in type 1 diabetics. How, exactly, does the Dexcom system accomplish this?

While you can reach out to the company for additional information and see if you qualify for their G5 system, it requires a prescription, so it might be ideal to speak with your doctor in advance.

Once set up, the under-skin monitor will take glucose readings five minutes apart and send them to the device, so you can see how your levels are trending over time. Important: While this system might help users go as long as 10 hours without having to prick their finger, the website’s FAQ emphasizes that you’ll still need to calibrate with a finger stick twice per day.

Whether using a supported iOS or Android device or Dexcom’s touchscreen receiver, users will see their current glucose readings and an associated color:

Arrows will also display the speed and direction your glucose is heading: Two down arrows mean you’re dropping fast, while one arrow down means you’re dropping more slowly. 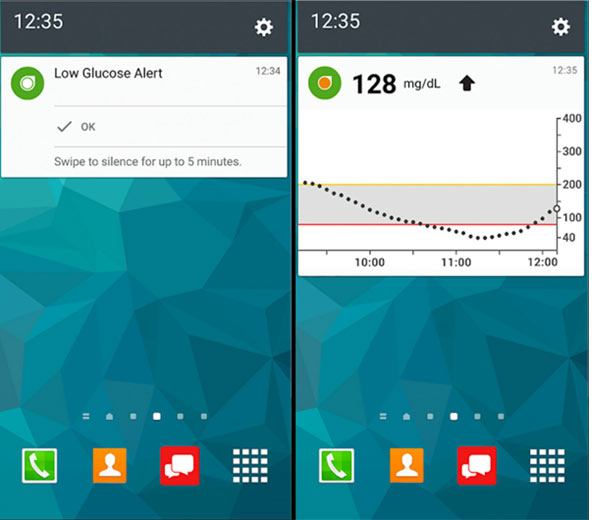 After sending data from the sensor, Dexcom’s G5 app can track information and provide useful graphs, reports, and other insights, along with customizable alerts. Credit: Google

You can also set customizable high and low glucose level thresholds, which will alert you when you're at or below a lower threshold, when you're trending up or down, or when you're out of range. These can work as audio and vibrate alerts, or as text messages.

If you prefer, Dexcom’s built-in Share feature helps up to five other individuals co-manage your diabetes by receiving these same alerts, who can also see your glucose levels in real time on their compatible smart device.

Together, the company advertises that you’ll be able to view trends over time, whether online or via the app, detect patterns (e.g., spiking or dropping during the night), and make better diabetes treatment decisions.

For Windows users, this CGM software downloads data from the G5 system in seconds, and uses a streamlined interface to create printable reports and charts for additional insights: 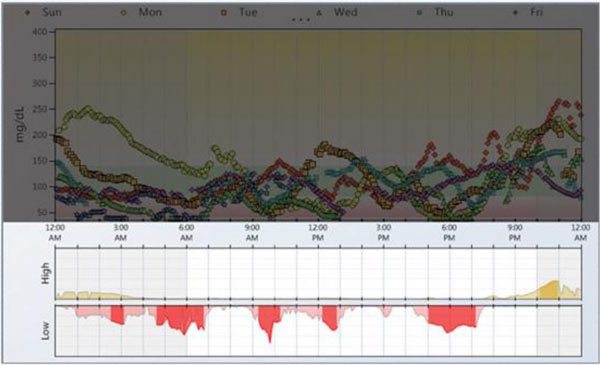 The cloud-based version of STUDIO, which provides the same ability to “access and track your glucose data anywhere, on any web-based platform,” but that’s targeted toward Mac users.

While Dexcom’s G5 sensor will send the information it gathers directly to your device, their Follow app allows up to five other people to remotely monitor your glucose data and trends.

Could Dexcom’s G5 System Cause Side Effects?

Although Dexcom’s G5 is the “the first FDA-approved continuous glucose monitoring system that can be used to make diabetes treatment decisions without confirmation with a traditional fingerstick test,” it’s not for everyone.

For example, it can’t be used by children under the age of two, pregnant women, or by those on dialysis. The sensor also must be removed before undergoing an MRI or CT scan, and can only remain submerged in water for less than 30 minutes (in case you plan on going swimming or taking a long bath).

Finally, users are instructed to never use the same insertion site twice in a row, which could result in irritation.

You’ll need to get a prescription from your doctor in order to purchase Dexcom, at which point you should discuss these and other potential side effects based on your specific diagnosis.

How Much Does Dexcom Cost?

Since Dexcom’s G5 is a prescription-only system, a pre-approved account is required in order to access their store and related product prices. To request one, you can fill out a form on the company’s website, which involves entering personal information and brief details about your diabetes therapy.

No prices are listed on the Dexcom website, although their FAQ indicates the system might be eligible for coverage for qualifying patients (typically, those with type 1 diabetes, or those with type 2 diabetes and who take insulin with every meal) under some Medicare plans.

There also weren’t any refund details were provided, although each mobile transmitter is covered under a three-month limited warranty (beginning from its first date of use) against defects in material and workmanship under normal use.

If you need to process a warranty claim or even need help setting up your device, the 24/7 support and diabetes coaching team can be reached at customerservice@dexcom.com. Their website also offers several guides and tutorials.

What Can We Learn From Dexcom Customer Reviews?

Between iTunes and Google Play, we encountered nearly 900 combined customer reviews at the time of our research, who had given the Dexcom app an average rating of about three stars.

Although only a handful provided direct feedback, common compliments cited insightful information, while complaints often regarded bugginess, as well as missing important details (e.g., no values for carb and insulin entries, the ability to add unlimited custom schedules, readings only go up to 400, etc.). A company representative responded in each instance.

We found a handful of hands-on Dexcom system reviews on other sites, although the majority referenced the previous G4 Platinum version. However, TheDiabetesCouncil.com’s Bridget Montgomery provided some in-depth insight earlier this year, stating that it was simple to use and easy to calibrate, although they noticed the app depleted battery life faster, along with limited Bluetooth transmitter range (five to 10 feet).

From a company perspective, Dexcom, Inc. was founded in 1999 and is based out of San Diego, CA. They held a D- rating with the Better Business Bureau, based on 12 customer reviews and 25 closed complaints, as of 3/19/18. Most referenced support issues, and the company hadn’t responded to 10 of these complaints at the time of our research.

While we didn’t encounter a ton of competition for Dexcom, we did come across two other prescription-based CGM systems during our research that also implement thin, flexible filament sensors inserted underneath the skin, allows users to avoid sticking their fingers (except for calibration), provides continuous monitoring, and are often covered by some private insurance and Medicare plans:

How to choose the right one for you? Like many other consumer products (health-related or otherwise), it’s largely going to come down to your needs and preferences.

For example, at $69.99 for the reader and $25.99 for each sensor, the Freestyle Libre is the lowest priced CGM above. Functionally, however, it’s perhaps the most limited (we didn’t test any of these devices firsthand to provide direct feedback), since there’s no app connectivity and you must manually scan the arm-based sensor in order to download data. With the reader, you’ll also have one more electronic device to keep track of.

On the other hand, if you want an app-based CGM and want it now, the Dexcom G5 is the only game in town, since the Medtronic Guardian won’t be available until summer 2018. You’ll have to pay a not-insignificant amount for the sensor, though, and each one is more than three times the cost of the Libre version. They only last seven (versus 10) days, to boot.

But as mentioned on Dexcom’s website, their system is currently your only option if you’re under the age of 18, or if your smart device works on an Android platform.

Speaking of the Guardian, it’s perhaps the closest in functionality to Dexcom’s G5, as well as sensors that are very close in price. However, the first transmitter will cost you $700, which is significantly higher than the competition.

What does all of this mean for you?

Our Final Thoughts About the Dexcom CGM

But, when trying to figure out which option will deliver the most value for the money, can you expect the Dexcom G5 system to deliver a more complete picture than the competition, as claimed on the website?

Again, we didn’t test any of these devices ourselves, but if you’re looking for app connectivity, detailed reporting, and sharing ability, it’s currently the only option until the Medtronic Guardian releases later this summer—which will also be priced meaningfully higher at $799 for its receiver.

Together, as reported in The Diabetes Council article cited earlier, if you’d prefer not to carry an additional receiver, are a parent or caregiver of someone with diabetes, would like the most insight into your diabetes management, or are a heavy sleeper who has trouble waking up to alarms, it might be difficult to go wrong with Dexcom—especially if you're covered by private insurance or Medicare.

Just remember that it’s not a one-time purchase since you’ll have to pay about $75 per month for replacement sensors.

Write a Review for Dexcom!