SeroVital Review: Does It Work and Is It Safe?

SeroVital is a supplement that’s marketed towards women who want to restore their youth, though they suggest that men can also benefit from use.

It purportedly increases your levels of human growth hormone (HGH) by providing your body with amino acids to foster its production in the pituitary gland.

According to the company website, SeroVital is the result of more than 25 years of research on aging, and it claims that the supplement is the only clinically tested HGH secretagogue formulation that increases the body’s natural levels by more than 600%.

The company website makes it clear that they can’t legally make claims about how the extra hormones in your system from taking SeroVital will affect your health. However, we found that the purported benefits of keeping your HGH levels high seem impressive.

So, will this supplement act as the fountain of youth, or is it merely an expensive way to attempt to avoid the inevitable? This objective review investigates the science behind the claims.

What Is Human Growth Hormone?

HGH is an essential hormone that is naturally released by the pituitary gland, and its partially responsible for putting you through puberty, your overall body composition, and even heart functioning.

Your HGH production goes down naturally as you age, starting in your mid-twenties, and this deficiency is believed to be one cause of common aging symptoms like loose, wrinkled skin, lower energy levels, and thinning hair.

The central premise of SeroVital is that taking amino acid supplements will boost your HGH production. However, based on our research and discussions with experts, this science isn’t 100-percent sound.

Dr. Annthea Fenwick, a Southern California fitness expert, told us that HGH supplements haven’t been studied as much as injections have been.

Paul Jenkins, founder of DNA Lean and a sports coach with more than 20 years of experience, agreed.

“When you use exogenous growth hormone [through injections], you select the exact dose then administer it. With supplements there are so many variables that determine how much growth hormone will be produced; you just can’t dose it the same,” Jenkins told us.

Saying that, it’s important to note that SeroVital doesn’t contain any HGH, but rather a proprietary blend of amino acids.

The product website references a double-blind, placebo-controlled clinical study where the supplement succeeded in increasing the growth hormone by 682 percent.

Notably, the company states that this increase falls within a physiologically normal range, so the effects on your health might not be dramatic.

For example, a 2017 study from Physiological Reports on women with heart failure found that amino acid supplements like SeroVital made less of a difference in the HGH levels than a protein-rich meal replacement drink.

Next, we’ll take a look at how SeroVital aims to boost your HGH.

How Does SeroVital Work?

SeroVital contains a proprietary blend of amino acids that are designed to increase your HGH levels naturally. According to the company website, keeping your levels high may result in more energy, better sleep, a higher sex drive, less body fat, and smoother, more elastic skin.

While the supplement is marketed more towards women, the product website states that it works for all adults between ages 18-70.

To experience the benefits, you are instructed to take four capsules daily on an empty stomach, either two hours before breakfast or two hours after dinner. Otherwise, the amino acids in your food might interfere with it.

Regardless of your timing, the company states that you shouldn’t take more than four capsules within 24 hours.

You can take SeroVital for as long as you want to increase your HGH levels, though the company states that the positive effects may gradually reverse once you stop.

SeroVital Ingredients: Are They Safe and Effective?

Below we’ve summarized the reported impacts of each active ingredient in SeroVital, as well as any supporting scientific evidence for their efficacy.

This is an essential amino acid your body takes in through food. Lysine is involved with growth, calcium absorption, and collagen production. It’s best to take in at least a gram a day, and it’s plentiful in protein-rich foods.

HGH in elderly women was not increased despite significantly increased levels of arginine and lysine after consumption of the amino acid mix. Use is generally safe, even at doses up to 17,500mg/day, though gastrointestinal related side effects have been reported.

According to WebMD, this non-essential amino acid is used to regulate heart health and control high blood pressure and kidney functioning, and it also stimulates the release of HGH. Argnine works by widening your arteries to increase oxygen delivery and blood flow through your body. There’s evidence in the 2010 book Nutritional Supplements in Sports and Exercise that Argnine more effectively stimulates HGH production when combined with lysine.

Again, when paired with lysine in earlier studies, amino acid mixtures offered promise in stimulating HGH secretion. Though this effect was contradicted in a more recent study.

Doses at 3.6 g/kg body-weight/day are safe in rats. Long-term studies are needed to characterize the effects of chronic use in humans.

This is a synthetic compound that your body converts to glutathione, a protein that works as a natural defense for the liver. Consumer Lab reports that the compound is often incorporated into anti-aging products, they state that there’s minimal evidence that it works when taken through an oral supplement because it doesn’t seem to stay absorbed long enough to be effective.

NAC didn’t slow or reverse age related decline of blood levels of hormones associated with the aging process in rats.

Oral NAC is safe, even at 3.6g/day, with adverse events rarely reported. Nonetheless, here remains limited support for the dietary use of NAC to reverse or slow effects of aging.

Derived from glutamic acid, glutamine is an amino acid that helps normalize the functioning of your immune system, digestive tract, and muscle cells. You lose glutamine as you age and when you undergo heavy exercise, infections or trauma, so it’s often used in the form of an oral supplement to restore functioning.

While 2g of oral glutamine increased HGH in 8 of 9 subjects, scientific support for use in this capacity is sparse.

High doses (>40g/day) may be associated with adverse effects like alteration in absorption of other amino acids, enhanced ammonia productions, and a reduction in the ability of your body to maintain acid-base balance.

Per RXlist, schizonepeta (also called hairy sage) is a plant used to treat skin conditions like eczema. While it’s considered safe to ingest, large doses have been linked to worsening cases of liver disease.

Our research didn’t turn up any meaningful side effects associated with taking these ingredients in the form and frequency they are contained within the supplements.

In a randomized trial, SeroVital increased HGH levels 8-fold from baseline measurements when compared to those who took a placebo, but the difference between them started to drop after two hours. The effect of this supplement in raising HGH was tested in this trial, but not the overall effects of elevating HHG levels.

Regarding the individual ingredients, support for a role in boosting HGH or slowing age is mixed or absent all together. Therefore, long-term studies are needed to clearly identify the potential benefits of this supplement.

Consumer Lab brings up concerns with supplement products that list their ingredients as proprietary formulas (like SeroVital does), rather than reporting the total amount of each active ingredient. Though the ingredients are generally safe, not knowing the amount of each in SeroVital makes it difficult to fully characterize the safety.

Seek medical advice prior to using.

How Much Does SeroVital Cost?

At the time of writing, it’s possible to buy SeroVital from the company website at three price points.

The company states that each purchase is risk-free for the first thirty days and that you can request a full refund—minus shipping costs—if you aren’t happy with your results.

To receive return instructions you can contact SeroVital’s customer service at (800)435-1409 or at customerservice@serovital.com.

Additionally, SeroVital is available from the following retailers: 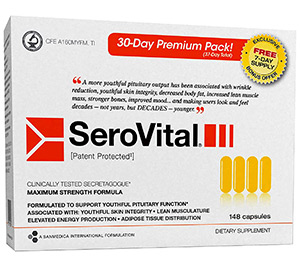 SeroVital costs $89.99 for 148 count box, with free shipping. SeroVital suggests you take four capsules daily, so this box is equal to a 37-day supply.

What Are Customer Opinions of SeroVital?

We believe looking at published reviews is one of the best ways to get a sense of how well a product may work for you.

115 HighYa readers published reviews on our previous analysis of SeroVital, and they awarded it an average of 2.6 stars, with most leaving either five star or one-star reviews. Amazon reviewers took a more positive approach, as SeroVital earned 3.8 stars out of five on that site.

Some of the most common comments were from customers who took the supplement for several months at a time and noticed significant differences in their life. The majority of reviewers seemed to be in their fifties or older, and many commented on how much younger they believed that they looked because of it.

Lots of reviewers also reported that SeroVital gave them more energy and that their hair grew faster and came in fuller. Others stated that it minimized their hot flashes and helped them sleep better.

Not all SeroVital users seemed to achieve such impressive results, as others stated that their improvements were almost unnoticeable and not worth the monthly cost for them. In some cases, women wrote that they didn’t feel like they benefited from SeroVital until they stopped taking it and were reminded what their baseline was before they started taking it.

Bottom Line: Is SeroVital Worth It?

Based on our research, we believe that HGH supplements might not be the anti-aging cure they claim for everyone. One study points to the ability of SeroVital to boost HGH, but we do not know the overall effects of this action.

Results from studies regarding the individual ingredient’s ability to boost HGH range from not supportive to mixed. Each is generally safe, though we don’t know the amounts included in SeroVital’s blend.

These include your sleep cycle, exercise habits, and diet. Supplements like SeroVital might make some difference but Consumer Lab reports that a better way to boost your HGH levels is to exercise and get lots of sleep.

Likewise, you are setting yourself up for problems if your hormones become too unbalanced.

Deborah Maragopoulos, an integrative nurse practitioner, told us that you ideally should ensure your other hormones like estrogen, testosterone, progesterone, DHEA, and cortisol are balanced before starting HGH supplementation.

Jenkins added that HGH is just one of many hormones that influence aging.

“Maintaining a normal level of HGH can help with aging. However, HGH is just one hormone that is part of a complex array of hormones and internal feedback mechanisms. To slow aging, it is also imperative to maintain sex hormones (estrogens and testosterone) and thyroid hormones,” he said.

Write a Review for SeroVital!