Snow Teeth Whitening sells at-home teeth whitening kits that use proprietary ingredients to deliver guaranteed results, without sensitivity, in as little as 10 minutes per day.

The website advertises Snow spent several years and more than $2.3 million undergoing research and development, all of which focused on inventing “a truly revolutionary product that simply works better than anything else we've seen on the market.”

Compared to other systems, Snow’s Teeth Whitening kit utilizes an LED-filled mouth tray that plugs into any electronic device and speeds up your results.

They also use a gel formula they claim is the world’s most advanced—the only one that can cut through deep wine and coffee stains. And they claim their whitening gel can do all of this without using harmful chemicals or animal testing.

Together, the company—founded in 2015 and partially owned by NFL star Rob Gronkowski—promises to provide the best teeth whitening results money can buy.

Should you become one of their more than 150,000 worldwide fans, though? How does Snow compare to other whitening systems, and which options will deliver the most value?

Let’s start by zooming in on everything their kit contains.

Taking a Closer Look at the Snow Teeth Whitening Kit

To use, you’ll begin the process by brushing your teeth for two minutes and then flossing and rinsing. Afterward, you’ll paint the company’s proprietary whitening serum onto each tooth, similar to painting your nails.

Snow includes a state-of-the-art mouth tray with their system, which uses patented LED activating technology to emit ultra-safe wavelengths of light they say will help whiten teeth faster without harming your mouth or body in any way (more on this later).

All you need to do is connect the device to any computer or smartphone and comfortably insert into your mouth. From there, you’ll keep it in place for between 10 and 30 minutes, depending on your desired level of whitening.

Your last step is to unplug the LED tray, remove from your mouth, and rinse both the tray and your mouth.

Despite the high-tech appeal of Snow’s existing LED mouth tray, the company has a new version currently available for pre-sale, which we’ll talk about in the next section.

The Current Snow Teeth Whitening Kit vs. Their All New System

Compared to Snow's current version, the soon-to-be-released system uses the same proprietary whitening formulas but features a space-saving design that neatly stores each component in your bathroom. It’s also travel-friendly if you need to whiten on the go.

The biggest technological difference is their new mouth tray, which features dual-light technology; a blue LED for professional whitening, paired with a red LED for eliminating gingivitis-causing bacteria and fighting receding gum lines.

The tray also boasts wireless operation, along with a waterproof design that allows you to whiten your teeth while you shower. When charging (also wireless), the Snow website advertises it self-sanitizes and kills 99.9% of germs. 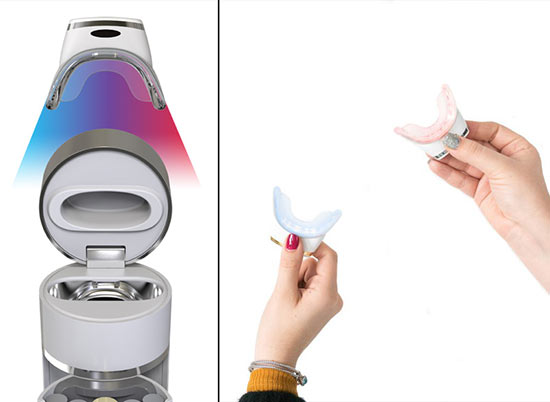 Finally, Snow's forthcoming kit includes a mobile app that gives you the opportunity to set goals and track the shade changes in your teeth, while earning rewards and free products.

Snow’s website frequently reiterates the proprietary nature of their professional serums, calling them “revolutionary” and “the world’s most advanced,” while emphasizing that they’re more effective than anything else on the market.

However, they don’t list any of their ingredients. We reached out to customer service, who promptly replied:

“We use a proprietary serum, but the active ingredients include hydrogen and carbamide peroxide, as well as sodium bicarbonate. Strength ranges from 8-12% for regular and 16-19% for maximum strength. European versions do not utilize hydrogen peroxide due to country standards.”

Do the ingredients in at-home whitening kits typically deliver the same stain-fighting power as a session from your dental professional? After all, they tell us, “Our results can be compared more to a $500-1000 dentist treatment, at a fraction of the cost and done in the comfort of your home.”

The short answer? Probably not.

This is because, according to Dr. Mark Burhenne, “Professional whitening gel tends to be stronger then at-home whitening gel.”

In other words, returning to our whitening article above, they often contain higher peroxide percentages (30%+) compared to at-home kits (typically 10-20%).

Snow tells us there are no side effects related to their Teeth Whitening system as long as you follow the included plan of 9–30 minutes each day for between 21 and 30 consecutive days.

They even say pregnant and breastfeeding women can safely use it.

In our article about choosing a whitening system, we report that the most common peroxide-related side effect reported by consumers is sensitivity, especially if the gel makes its way onto the gums. Not all users experience it, though.

If you do, symptoms should gradually subside over the course of minutes to hours.

How Much Does Snow Teeth Whitening Cost?

The Snow Teeth Whitening complete kit sells for $150, with the newer version currently available for pre-sale at $299.

Three, six, or nine-packs of whitening serum refill wands (2 ml each) will cost you between $25 and $75.

A portion of every sale is donated to help a child who needs dental work. Shipping is charged during checkout and Snow ships from Arizona to more than 195 countries around the globe.

The company backs their whitening kits with a 100-percent results guarantee and a five-year warranty. However, their Return Policy page, you cannot make a return or receive a refund:

“We offer a 100% results guarantee, not a 100% money-back guarantee. We are not allowed to accept returns or issue refunds in cash due to strict hygiene regulations.

All refunds are issued as a store credit (gift card). The 100% results guarantee means we can replace your whitening serum if you are unhappy with your whitening results.”

You can call customer service at (480) 470-6184, although as we outlined above, the only option we were given was to leave a message. Alternately, you can send an email to support@trysnow.com.

Choosing Between Snow and Other At-Home Teeth Whitening Systems

According to a 2017 report by NPR, at-home teeth whitening represents a $3.2 billion industry, so there are lots of options to choose from if you’re in the market.

When comparing all of these competitors, do you necessarily need to pay more for a kit like Snow that features an LED-illuminated mouth tray? After all, you’d likely spend $400+ over the course of a year if you used their system every other month for 21-30 days at a time, as directed.

Burhenne’s article for Ask the Dentist casts some doubt on the effectiveness of LED whitening systems.

“There is no proof that a UV light used by a dentist (during in-office whitening) speeds up the process of whitening or does a better job at whitening your teeth,” he wrote in his article. “In fact, it may harm the tooth and can damage your eyes, lips, and gums with UV rays.”

On the other hand, specific wavelengths of red and blue light can help kill bacteria by causing them to develop toxic internal substances.

However, Snow doesn't indicate which red-light wavelength they use in their soon-to-be-released kit—something that's also not available in their existing system.

Based on our extensive research into the topic, we’ve found that at-home teeth whitening kits typically share much more in common than otherwise.

Most companies including Snow feature LED accelerator lights, enough whitening gel for multiple treatments, instructions to use for 10-30 minutes per session, and satisfaction guarantees.

The most significant differences are the prices you'll pay, along with the active ingredient concentrations found in their formulations:

Lining these competitors up side-by-side, we can see that although Snow’s Teeth Whitening system is priced meaningfully higher than most, it actually ties with MySmile for the lowest peroxide concentrations—even when including their maximum strength formula.

But, considering you can get twice the concentration for less than half the price with AuraGlow, ActiveWow, and Cali White’s systems, it’s certainly worth noting.

On the flip side, it’s important to point out that the higher the peroxide concentration, the more likely it is you’ll experience temporary teeth or gum sensitivity.

Taking all of this data into consideration, should you go ahead and place an order for Snow Teeth Whitening?

Based on what we learned from experts in this area, along with our previous in-depth research, it doesn't appear that Snow’s LED system can meaningfully accelerate the whitening process, or boost your results.

Furthermore, compared to other at-home whitening kits, Snow’s system is priced meaningfully higher and uses gels featuring as much as half the peroxide concentration.

There’s no doubt that Snow’s Teeth Whitening system exudes a sleek, technological vibe. But, we think it’s important to maintain realistic expectations about the level of whitening Snow’s kit will deliver, as well as how your results will compare to a professional whitening session at your dentist’s office.

Finally, it’s important to keep in mind that once you hand over your credit card details and place an order for a Snow’s $150 Teeth Whitening system, you can’t obtain a refund.