About The Neck Hammock

The Neck Hammock is a simple, portable, FDA approved medical device that attaches to any door, rail, or pole and promises to provide professional-grade neck pain relief in ten minutes or less. Despite this, the website claims it costs less than a single physical therapy session.

The Neck Hammock accomplishes this using mechanical cervical traction, which boosts circulation and promotes proper alignment, potentially leading to additional benefits like boosted energy, reduced stress, improved sleep quality, and better posture. All you have to do is lie back and relax.

Although The Neck Hammock was created by a licensed physical therapist, does this mean it really will help make solving your neck pain easy, as claimed on the website? Before diving in, let’s start by discussing the underlying issue.

Just like discomfort in any other part of the body, neck pain is your body’s way of letting you know that something’s wrong—but not specifically what’s wrong. In fact, My Virtual Medial Centre explains that:

“Neck pain can present in any of the seven cervical vertebrae (back bones) connecting the base of skull to the thoracic cage. As well as the cervical spine, muscles, ligaments, and soft tissues can also be a source of neck pain. In addition, other structures like the trachea (wind pipe), blood vessels, thyroid gland, and lymph nodes are also found in the neck and can be a source of pain.”

With this said, Spine-Health reports the most common causes of temporary neck pain are sleeping in the wrong position, sports-related injuries, poor posture, repetitive motions, holding the head in an unusual position, and whiplash. On the other hand, chronic neck pain is frequently the result of cervical degenerative disc disease, herniated disc (as mentioned on The Neck Hammock site), osteoarthritis, stenosis with myelopathy, and foraminal stenosis.

Obviously, to figure out which—if any—of these is causing your neck pain, you’ll need to have an in-depth discussion with your doctor. In the meantime, let’s take a closer look at the cervical traction offered by The Neck Hammock.

How Does The Neck Hammock’s Mechanical Traction Work?

In the Clinical Sports Medicine Medical Management and Rehabilitation textbook, Joel M. Press and Deborah A. Bergfeld explain that cervical traction—a method of stretching and realigning the spine—is frequently used in professional settings to provide pain relief from cervical spine injuries. This is accomplished via several avenues:

In a professional setting, such as a physical therapist’s office, this is often provided by bulky, expensive equipment with a harness that rests underneath the neck and lightly pulls to deliver traction. However, with The Neck Hammock, the website tells us you can experience much of the same relief using their affordable, portable device.

Overall, they explain that the process works over three steps: 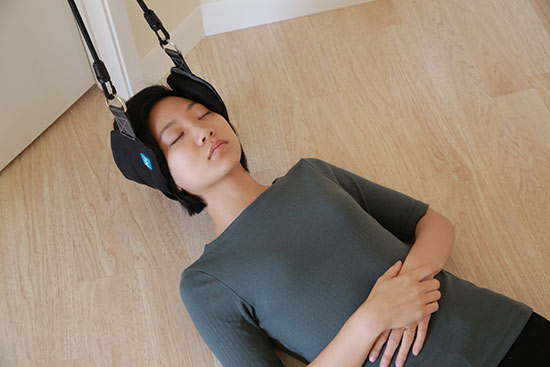 From there, the video advertises that the device will increase intervertebral space, which will boost blood flow and circulation and deliver more oxygen to the muscles, nerves, tendons, and ligaments. As a result, they tell us you’ll “feel your muscles opening up and your neck pain slipping away for good.”

Then, when you’re finished, it stores away easily in the included spandex bag and can be carried in just about any small to medium size handbag. When the time comes, the device is hand washable.

Could The Neck Hammock’s Cervical Traction Cause Side Effects?

According to a 2011 systematic review of mechanical cervical traction, “Side effects are generally few, but can include headache, nausea, fainting, and injury to tissue.” Healthline adds potential muscle spasms and temporary pain in the treated area.

However, The Neck Hammock’s website emphasizes that the device shouldn’t be used by those with an acute cervical injury, spinal instability or hypermobility, neck tumors, rheumatoid arthritis, osteomyelitis, or those who are under the age of 16.

Even then, they note the device is meant to complement the benefits of physical and massage therapy, but not to replace them. For these reasons, it’s always a good idea to speak with your doctor before choosing any product to address neck pain.

How Much Does The Neck Hammock Cost?

On Indiegogo, Perk options for The Neck Hammock were as follows (estimated delivery February 2018):

Each device comes with a free 14-day trial for the Calm App, as well as “The Daily Stretch” e-book.

While no details were provided about the app’s functionality or operating system availability, the e-book is said to help show you how to use simple daily stretches that can “improve your overall flexibility, mobility, and energy levels.”

There also weren’t any refund or warranty details outlined, although the website emphasizes that The Neck Hammock is made from the “highest quality parts that are strong and built to last.”

What’s the Story Behind The Neck Hammock?

The Neck Hammock was originally launched via a November 2017 Kickstarter campaign, which ultimately raised more than $900K on an original goal of just $20K. In fact, the makers tell us the campaign was fully funded within three hours. Since then, they’ve gone on to raise another $1.2 million through Indiegogo.

From a company perspective, The Neck Hammock, Inc. is based out of Santa Monica, CA and was founded by Steve Sudell, whose bio lists him as a Licensed Physical Therapist, Athletic Trainer, and Level 2 Fascial Stretch Therapist. Steve is also owner of Prehab2Perform, a Venice, CA-based outpatient sports physical therapy service.

According to The Neck Hammock website, Steve’s impetus for creating the device was to “give people an alternative solution to mechanical cervical traction completed at their physical therapist’s office that was affordable, convenient, and highly effective.”

Are There Other At-Home cervical Traction Devices Competing With The Neck Hammock?

While we didn’t encounter any devices designed exactly like The Neck Hammock during our research, we did find several others that promised to provide varying levels of mechanical cervical traction in the comfort of your home, and at a wide variety of price points. Some of the top search results included:

Important note: During our research, we encountered dozens of knock-off devices that were very similar, if not identical to, the product in question on sites like eBay. In some instances, these were priced as low as $17, and many even used The Neck Hammock’s stock pictures. By all appearances, these do not appear to be official products.

How can you choose which of the legitimate products will deliver the most bang for your buck?

As we discussed earlier, there can be myriad causes of neck pain, and finding the appropriate relief starts with diagnosing the underlying condition, which can only be accomplished by your primary care physician. As such, we’d recommend scheduling an appointment, where you and your doctor can talk about the issue, perhaps order the appropriate tests, and come to a science-backed conclusion about which steps you should take next.

From there, as a consumer advocacy website, we’d strongly recommend only doing business with companies who offer competitive prices, stand behind their products with robust refund policies and warranties, and who come with mostly positive online customer feedback.

Does this mean you should go ahead and place your order for The Neck Hammock?

Our Bottom Line About The Neck Hammock

Considering its unique design, patented padding that comfortably molds to the contours of your head, and FDA approved status; its ability for users to individually control traction levels, the ease of use and portability, and the fact that it doesn’t include a chin strap that can potentially cause TMJ, there seems to be a lot to like about The Neck Hammock.

On top of this, it appears to be a massive crowdfunding success, having raised nearly $2 million between the company’s Kickstarter and Indiegogo campaigns.

However, there weren’t any refund or warranty details listed on The Neck Hammock website at the time of our research, nor any way of getting in touch with the company. As such, just like with any crowdfunding campaign, make sure you can do without the money before deciding to pledge.

Write a Review for The Neck Hammock!