WalkFit Platinum Review: What You Should Know

WalkFit Platinum claims that their orthotic will improve your comfort while standing, walking, or running.

Orthotics are specialized shoe insertions that are intended to relieve various aches and pains thought to be related to the structure and function of your feet.

They can be custom-made, prescription, or purchased over the counter (OTC). Some orthotics are designed for specific activities like prolonged standing or hiking, while others claim to offer comprehensive relief.

As your feet serve as your body’s foundation, they may be the source of the knee, hip, and back pain. Thus, these issues may be relieved by making corrections from the ground up.

By simply inserting their orthotic into your shoes, WalkFit Platinum alleges they will:

But can your chronic pain really be alleviated by such a simple fix?

In this article, we’ll discuss how orthotics are supposed to offer these benefits and also review any scientific support to back WalkFit Platinum’s claims.

How Does WalkFit Platinum Work?

These orthotics work like many of the other products currently available.

The first step is to select the sizing appropriate for you. Fit is based on traditional shoe sizing and available in men’s size 6–14.5 and women’s size 5–12.5.

Next, simply insert the orthotic into a pair of shoes.

WalkFit Platinum orthotics are thought to accomplish the proposed benefits by supporting your foot and working to evenly disperse your weight. This minimizes the risk of painful pressure points, stress, and rubbing.

Is There Any Scientific Support Backing WalkFit Platinum’s Claims?

According to WalkFit Platinum’s site, their orthotic has been “clinically tested”. The following graph is said to come from independent testing in which the pain relief abilities of their orthotics were validated: 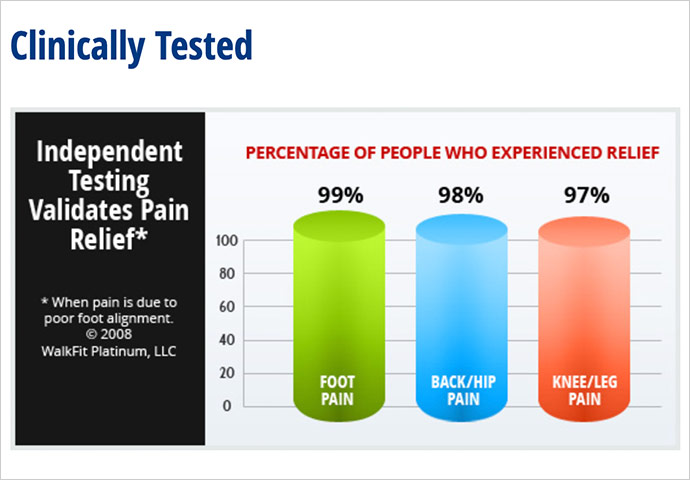 What does any of this mean? Absolutely nothing. While some form of testing may have occurred, they provide no further details.

Without knowing what type of study this was, how many subjects were included, or how these outcome measures were evaluated, we can’t take anything away from this graph.

When contacted for further details or a link to the study, WalkFit representatives informed us that this information was “not available to the public” and that “clinical testing is not the same as scientific testing.”

Be wary of companies like this. While obtaining the full text of a research article often comes at a price, at the very least the summary and journal of publication should be available.

Without this information, there is no way of telling if the findings have been published or even if the scientific method was used in the investigation.

Other orthotics have been tested, however.

A review of 5 studies with over 300 rheumatoid arthritis patients treated with foot orthotics concluded that there was no difference in pain relief when compared to control groups. The use of orthotics offered neither long nor short-term pain relief or reduced disability.

In another review, 19 randomized trials were analyzed to determine if foot orthotics effectively treated heel pain. They concluded that orthotics do not offer short or long-term relief for heel pain, nor do they improve function.

In terms of back pain, a review of 11 trials found that support for the ability of orthotics to treat or prevent back pain is lacking.

Orthotics are generally safe to use, though there are some concerns you should be aware of before using.

First, inserting an orthotic will alter the way your shoe fits. While the risk for poor fit can be reduced by opting for custom made orthotics, you may have to try a number of OTC versions before finding the best option.

Orthotics that cause your shoes to fit tightly can lead to the formation of bunions, corns, blisters, and other undesirable conditions. This can be especially dangerous in those with diabetes, peripheral vascular disease, or other conditions that negatively affect the sensation in your feet.

You should also be mindful that there are a wide variety of potential causes for foot, knee, hip, and back pain. Foot orthotics may not alleviate or even improve many of the causes.

Some of the sources of pain can be serious and require medical management.

For these reasons, it is best to first identify the source of your pain and to include your doctor in the decision to use an orthotic.

You can order your WalkFit Platinum Orthotics directly from their site.

Each purchase is backed by a 30-day guarantee. According to their website, their orthotics are also under a lifetime warranty.

“To replace your WalkFit® Platinum Orthotics for any reason, just return them to the address above (with $9.95 shipping & processing), and we will exchange them for FREE, FOREVER.”

The orthotics are also sold on Amazon. This is one of the few instances where this option won’t offer savings, however. The orthotics are sold for $29.95 and ship free with Prime, though it seems as if their shipping fee has been tacked onto the sale price.

As we’ve already mentioned, you can work with your doctor to coordinate a prescription, custom-made orthotic.

There are also a number of OTC orthotics currently available – a simple internet search will reveal the numerous options.

Dr. Scholl’s is a popular brand of orthotics that offers a variety of products. Their Pain Relief Orthotic also claims to distribute weight and absorb shock. It’s just $12.97 at Amazon. This brand offers kiosks at various retailers that can help guide you to the right orthotic while you stand on a pressure sensing platform.

While WalkFit Platinum claims that their orthotic has been clinically tested, they refused to provide further details beyond the graph offered on their site. It is unlikely that this study used the scientific method or was published.

Other orthotics have been studied, though the available support for their ability to offer relief is lacking.

Nearly 1,000 users rate WalkFit Platinum Orthotics 4.1-stars; over 60% were 5-star ratings. Many report improvements in both pain and posture, while those unsatisfied describe poor fit an increased foot pain.

If your pain is severe enough that you’re actively looking for treatment, seeing your doctor may be a better first step.

As there are many sources of foot, knee, hip and back pain, identify the cause first as something more than an orthotic may be needed.

Write a Review for WalkFit Platinum!

WalkFit Platinum Review: What You Should Know