What Is Omega XL?

Touted as the “secret” to relief from joint pain, Omega XL is a nutritional supplement that claims to feature a highly-concentrated extract containing up to 22 times more free fatty acids than regular fish oil.

Omega XL is manufactured by Great HealthWorks based out of Hollywood, FL.

The supplement claims to reduce joint pain and inflammation. This review analyzes the product's efficacy and safety to help you determine whether it's right for you.

How Does It Work?

They also boast providing “22x more omega-3 fatty acids than standard fish oil capsules.” You won’t find any information detailing the amount of these active ingredients per capsule, or per serving, however.

Of the many omega-3s, the most discussed include alpha-linolenic acid (ALA), eicosapentaenoic acid (EPA), and docosahexaenoic acid (DHA). Omega XL claims to offer EPA and DHA among the 30 fatty acid blend.

Omega-3s are thought to have wide-ranging effects such as improving mental health, reducing the risk for heart disease, fighting inflammation, and alleviating joint pain.

Perna canaliculus, or the New Zealand Green-Lipped Mussel, provides much of the fatty acids Omega XL claims to offer. They report that their supply of mussels are sourced from “pristine” waters where they are harvested after 18 months.

As there are 60 soft gels in a bottle, perceivably 1 serving is 2 soft gels. Omega XL recommends taking the capsule with meals if you have a sensitive stomach, though they provide no information regarding use beyond this.

Most of the research regarding this mussel seems to be related to arthritis.

“They are rich in omega-3 acids, which can have an anti-inflammatory effect,” Dr. Henry Gasiorowski, a medical expert at Greenwich Dermatology, told us.

We found a 2017 study of a brand name supplement with green-lipped mussel extract known as BioLex. In this study, 80 patients with moderate to severe arthritis in their hips or knees were given either 600mg of BioLex daily or a placebo for twelve weeks.

The results from this study were mixed, Gasiorowski said.

“Studies such as this one have not provided a great deal of evidence that green-lipped mussel extract helped with immediate pain relief,” says Dr. Gasiorowski. “However, after 12 weeks these subjects did reduce their paracetamol use compared to subjects who [took a placebo].”

A therapeutic evaluation from 2015 suggests this mussel does offer wider anti-inflammatory properties and may be able to boost the effects of NSAIDs medications when taken together.

In a review of 4 randomized trials, doses of green-lipped mussel extract ranging from 210-1150mg/day all seemed to offer clinical benefit. Two of the 4 studies were thrown out, however, as the scientific method and statistical analysis were unsatisfactory.

This review highlights the mixed nature of current data, as well as the need for much more work to characterize the benefits.

In 43 patients with rheumatoid arthritis, those randomized to receive fish oil omega-3 fatty acids (3 g/d) and 9.6 mL of olive oil over 24-weeks experienced more relief than those that received placebo or fish oil alone.

A recent review of available research points to mixed results regarding any potential benefit with Vitamin E in those with joint pain, particularly osteoarthritis.

While 200-400mg doses were associated with improved walking, standing, and patient-reported benefits, many other studies found a negligible or negative relationship between vitamin E and joint health.

Scientific support for joint relief from Perna canaliculus use in human subjects is minimal. Furthermore, questionable methods and statistical analysis were used in much of the available literature. More work is needed to clarify any potential benefit for joint pain.

Vitamin E and the potential for joint pain relief has been extensively studied in subjects with osteoarthritis. Though support exists, the results are mixed.

According to the product’s website, there are no known side effects or drug interactions, and Omega XL is even safe to use for individuals with shellfish allergies. This may not be the case, as mussels do possess a known allergenic protein, Per v 1, though mussels are the least likely shellfish to cause a reaction.

Even at doses up to 1150mg daily, no adverse effects were reported with green-lipped mussel extract. Olive oil supplementation was similarly safe at 9.6mL daily over 24-weeks. Vitamin E was safe up to 400mg daily.

Of course, this information is not as helpful as it could be as we do not have information regarding the amounts of each active ingredient offered in Omega XL.

For omega-3 supplements in general, reported side effects include bleeding, impaired immune function, and impaired lipid and glucose metabolism, though they are likely safe up to even 5,000mg per day.

While safe in general, we do not know the amount of each ingredient included in Omega XL. It is best to speak with a physician before use.

At the time of writing, you can buy Omega XL directly from the manufacturer as a buy-one-get-one-free deal for $39.95, plus applicable taxes and $4.95 for shipping. For this, you’ll receive 120 soft gels (two bottles of 60 soft gels each), which translates into a 60-day supply.

Keep in mind that as soon as you place your order, you’ll be enrolled in the company’s auto-ship program. As a result, you’ll be sent a fresh 30-day supply of Omega XL once per month, and your credit card will be charged $39.95, plus shipping and handling.

Omega XL comes with a 90-day refund policy, which begins the day your order is placed, less shipping and handling charges. Outside this 90-day period, no refunds will be honored.

To cancel your auto-ship subscription or to initiate the refund process, contact customer service at (800) 609-4818 or support@omegaxl.com. 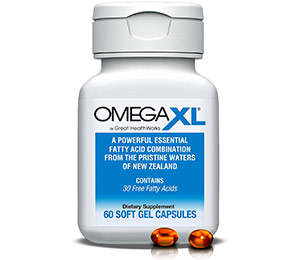 Omega XL costs $47.99 for a 60-count bottle, with free shipping. (Single purchase, no subscription.) It is recommended that you take 2 soft gels each day, so one bottle is equal to a 30-day supply.

This supplement has several hundred reviews on Amazon and averages four stars.

The most common complaints include failure to work, too little transparency about ingredients, and the high price point. Others mentioned that the capsules arrived fused as if they had melted during shipping.

According to consumer reviews on our website, Omega XL isn’t a fan favorite. The supplement earned 2.4 stars after 35 reviews.

HighYa reviewers took issue with the company’s subscription policy and wrote that it was difficult to cancel their orders.

Others felt like the product didn’t deliver any of the promised benefits and that it cost too much compared to competing supplements.

How Does Omega XL Compare to Similar Products?

Omega XL isn’t your only option if you’re interested in trying out the benefits of New Zealand green-lipped mussel.

We chose to look at these products because they have high ratings on Amazon and contain Perna canaliculus as their main ingredient.

Customer reviews on both Amazon and the Swanson store are primarily favorable. This product earns four stars out of five on both platforms, with many reviewers saying that it left them pain-free after numerous other remedies failed to work.

Most of the negative reviews we read seemed to come from people who didn’t appreciate the fishy aftertaste or who thought the supplement didn’t work as described for their symptoms.

However, it’s suggested that you take two capsules at a time for both FoodScience and Omega XL, so the real price per serving is $0.30 and $0.74, respectively.

This brand averages four stars out of five after more than 120 reviews, and it contains nothing but mussel, alfalfa leaf, gelatin, and cinnamon oil for flavoring.

The Bottom Line: Is Omega XL Worth It?

Support for the efficacy of this supplement is lacking. Even the most extensively studied ingredient provides us only with mixed results.

Next, there are no details regarding the amount of the reported ingredients listed on the product’s website. Based on our experience, failing to include a product label or a full list of ingredients is a big red flag that you should stay away.

There are many similar nutritional supplements on the market, so it may be worth your time to do some research.

Both the Swanson and FoodScience of Vermont supplements we referenced above are a fraction of the price of Omega XL and don’t automatically enroll you in an auto-ship program.

You might find that they are a better way to experiment with whether Perna canaliculus will work for you, though having a conversation before use is your best bet.

Write a Review for Omega XL!