LeanFire XT Review: What You Should Know

Force Factor claims that LeanFire XT’s thermogenic blend of ingredients will kickstart your metabolism and help you burn fat.

According to the product page, by taking one capsule 30–60 minutes before your two largest meals each day, you can expect the following:

The proposed thermogenic effects of LeanFire XT may increase the production of heat in your body, allowing you to burn more calories.

The LeanFire XT Ingredients: What Does the Science Say?

Force Factor claims that the proposed benefits of LeanFire XT are made possible by its thermogenic blend of ingredients.

They offer a 721mg “Peak Thermovigilance Triplex” that consists of the following three blends:

In a review of 3 randomized trials, those taking GCBE at doses ranging from 180-200mg for up to 4-months experienced more weight loss when compared to placebo.

Green tea is often included in fat-burning supplements for its suspected ability to boost energy and promote weight loss. Like GCBE, its effects may be related to caffeine.

The combination of 200mg of caffeine and green tea doses ranging from 901200mg daily increased energy expenditure. These benefits were seen regardless of the green tea dose.

The combination of 500mg of green tea and daily exercise improved body weight, BMI, waist to hip ratio, and body fat percentage to a higher degree than exercise alone.

L-Carnitine is an amino acid that may offer energy, weight loss, and cognitive benefits when supplemented.

According to this review of 9 studies examining the weight loss effects of L-Carnitine in adults, those using the amino acid experienced more weight loss and a more significant reduction in BMI. These benefits diminished with L-Carnitine use over time, however.

Cayenne pepper is often included in weight loss blends due to its active ingredient, capsaicin.

So far, the possible benefits appear to be only mild.

In a randomized trial, 1g of cayenne burned an extra ten calories over 4.5 hours. A more recent review confirmed these results. Researchers concluded that capsaicin might aid weight loss, though only to a minor degree.

This spice may also boost metabolism. Overweight individuals treated with 6mg of BPE daily reduced their BMI and body fat.

L-theanine is an amino acid that is often included in supplements that claim to enhance mental focus. It is also found in both black and green teas.

Combining 97mg of L-Theanine and caffeine improved accuracy on mental exams, though similar effects have not been well-studied.

Caffeine anhydrous is a highly concentrated version of caffeine that may offer metabolism-boosting effects.

In fit adults, 4.45 mg/kg doses of caffeine anhydrous were superior to caffeine; these individuals improved their running time to exhaustion.

Theacrine is obtained from the leaves of the Camellia Kucha plant and structurally similar to caffeine.

Recently, 150mg of theacrine did not significantly enhance mental function, though subjects did report energy and mood benefits.

While your body produces DMAE, it is also obtained in fatty fish. DMAE is commonly included in nootropic supplements for its suspected brain-boosting benefits.

Nonetheless, there is not much support for these effects. A study in the 70s found 600mg of DMAE 3x daily reduced depression and anxiety in elderly subjects over 4-weeks.

Much more work is needed to identify the long-term cognitive benefits in human subjects.

Yohimbine is obtained from the bark of African evergreens.

Yohimbine at 20mg daily offered weight loss benefits in obese women. However, 43mg daily over 6-months was ineffective in men.

LeanFire XT is a stimulant-containing supplement and should be used with extreme caution.

As caffeine anhydrous is a highly concentrated form of the stimulant, you may react very differently when compared to your consumption of natural forms.

One teaspoon of caffeine anhydrous is equivalent to about 5000mg, or roughly 28 cups of coffee. Safe use for caffeine is considered to be 400mg of caffeine daily. While the 150mg offered in LeanFire XT falls well short of this, be aware that their blend also contains two other forms of caffeine.

Force Factor only details the caffeine anhydrous quantity, so adding LeanFire XT to your regular tea, coffee, and soda regimen may place you at levels beyond those that are safest.

Individuals with pre-existing heart conditions and those taking medications that support the function of the cardiovascular system are especially at risk, though healthy individuals can experience side effects too.

If you’ve consumed too much caffeine, you may experience restlessness, nausea, agitation, rapid heart rate, and increased blood pressure. The rapid consumption of 1,200mg of caffeine can also be associated with seizures or even death.

Never consume LeanFire XT in ways other than as directed and always consult your doctor before using a stimulant-containing supplement.

Pricing and Where to Buy

LeanFire XT is not available from their site, though several popular vendors offer this supplement. Check out the chart below for cost comparisons:

Keep in mind that the 60ct bottle represents a 1-month supply. Based on current pricing, purchasing two 30ct bottles from Amazon is your most cost-effective option.

Force Factor does offer a customer satisfaction guarantee, though this is only extended to those with a Force Factor VIP Membership. This is their auto-ship program, which does not seem to be available as they don’t offer direct purchase of LeanFire XT from their site.

Without the membership, they’ll only honor refunds on unopened supplements – thus, you won’t be able to trial LeanFire XT. This means that, again, Amazon is likely your best bet as they offer free 30-day returns. 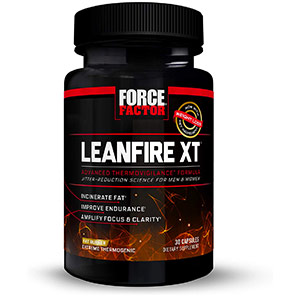 What Are the Alternatives to LeanFire XT?

As weight loss and fat-burning are common fitness goals, there are a number of vendors that claim to offer dietary supplements that can help you achieve these results.

At around $50, their 1-month supply is priced comparably to LeanFire XT.

Trans4orm from Evlution Nutrition is another option that includes ingredients like green tea, Yohimbe, and BPE. They offer a 2-month supply for around $30 at bodybuilding.com.

LeanFire XT’s blend of thermogenic ingredients does have some scientific support for actions like boosting energy, metabolism, and focus.

The fact that LeanFire XT uses multiple forms of caffeine to facilitate these benefits can be concerning in certain individuals, however. The caffeine-related adverse effects seem to be reflected in LeanFire XT’s rating at Amazon.

The supplement garners a 3.3-star rating from 286 users – nearly 50% of which are 3-stars or less. The unsatisfactory ratings seem to be due to side effects like the jitters, restlessness, and dizziness, though many also reported a complete lack of results.

Whether you have existing medical conditions or not, be sure to opt for the thermogenic benefits of healthy lifestyle changes as the first step on your weight loss journey. The addition of a supplement may enhance your results, though they can’t replace the many health benefits.

Always consult your doctor before using supplements, making drastic changes to your diet, or engaging in intense physical activity to discuss the safest means of achieving weight loss.

Write a Review for LeanFire XT by Force Factor!